Bitcoin has been an incredibly interesting asset to watch for years at this point. During the year 2017, the value of the cryptocurrency was on the rise, leading others on the decentralized market to run wild. In fact, the monumental rise in cryptocurrency in the year 2017 was so massive that several publicly traded companies enjoyed gains as well by doing little more than opening cryptocurrency-mining subsidiaries. However, while many were celebrating the monumental rise of this emerging market, others were warning that Bitcoin and the entire crypto-market is one big bubble.

While little attention was paid to the naysayers last year, that’s not the case this year. As regulatory roadblocks hit center stage, investors started to wonder if there was something to the bubble theory. This mixed with billionaire moguls warning that the Bitcoin bubble is bursting is leading to a real pullback in the crypto-market. However, is the figurative Bitcoin bubble bursting? Today, we’ll talk about where the recently trending bubble burst stories are coming from and what you should be watching for ahead.

Where The Ideas Of A Bitcoin Bubble Burst Are Coming From

Recently, we’ve seen more and more posts that the price of BTC isn’t going to stay where it’s at for long and that the decentralized sky may be falling. So, where is this all coming from? Well, it started with a post pointing out the idea that Morgan Stanley analysts think that the Bitcoin bubble resembles the dot-com bubble.

In fact, recent news, we learned that due to the fact that Bitcoin fell around 70% from its mid-December high through its early-February low, Morgan Stanley believes that what we’re seeing in Bitcoin’s price mirrors what we saw in the NASDAQ during the dot-com bubble era. 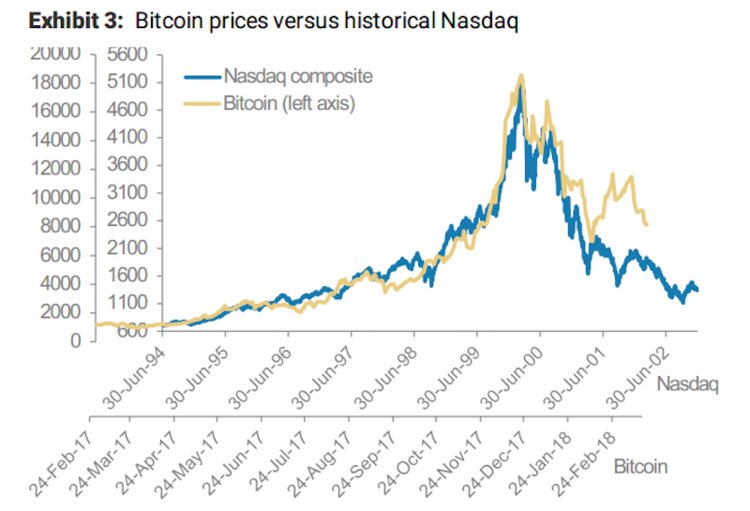 At the end of the day, it’s hard to argue the facts. Bitcoin did see a monumental run, as the NASDAQ did during the dot-com bubble. Not to mention, if you put the two charts side by side, as Morgan Stanley suggests, the similarities are clear. So, from a purely technical perspective, the Bitcoin bubble may be bursting.

What You Should Be Watching For Ahead

The big question here is whether or not Bitcoin is a bubble, and whether or not it’s bursting. However, looking at this purely from a technical standpoint simply isn’t a good idea. I’ve had several conversations with some of the most talented technical traders I know. Each time, they’ve told me that cryptocurrency technical data are like nothing we see in stock market technical data. This is because one big player could buy or sell a large amount of any cryptocurrency, causing wild and unexpected swings. Therefore, just setting two charts together and pointing to some similarities between the two isn’t a reliable way of predicting what’s going to happen.