The German bicycle industry experienced a rather difficult year due to the weather in the first half of 2016. A rainy spring and cool temperatures extending into summer were responsible for the fact that cycling did not really take off until later in the year.

The conditions in the first half of 2017 were quite different. Good cycling weather came early, and even with the cool and rainy April, the first six months of the year proved to be quite bicycle-friendly.

Nevertheless, development of the overall market in relation to sales once again showed a decline. The bicycle industry association calculates that 2.64 million bicycles and e-bikes were sold between January and June 2017, representing a decline of 2.2%.

Production also fell slightly below the previous year’s level. In the first six months, 1.44 million vehicles were produced, correlating to a decline of 2.7%.

According to the association, it can be assumed that sales of bicycles, e-bikes, components, and accessories have increased slightly, particularly as a result of rising e-bike sales.

According to numbers from the Federal Statistics Office, imports of bicycles and e-bikes to Germany declined by about 1.2%. The e-bike share of imports in the period January to June was 21% (previous year: 19%).

On the other hand, exports of bicycles and e-bikes show a slight increase. Between January and June, export volume rose slightly by 2.3%. The e-bike share of exports was 25% (previous year: 21%). 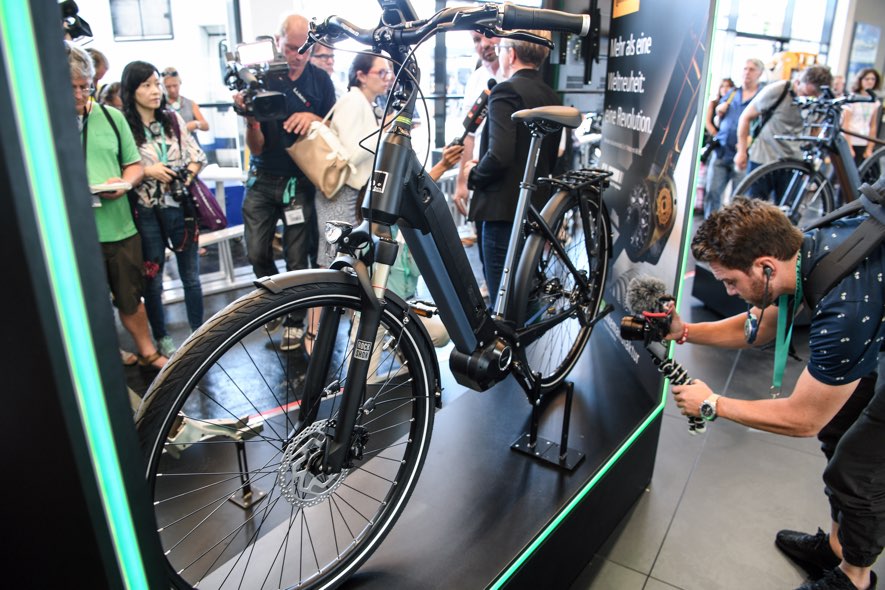 While Germans are hesitant to buy when it comes to bikes, the news around e-bike sales is nothing but good for the bicycle industry. The bicycle industry association estimates that around 540,000 e-bikes have already been sold through dealerships in the first half of 2017. For the year as a whole, the industry estimates that around 680,000 vehicles will be sold. This would represent double-digit growth of around 12%.

Although the categories e-city and e-trekking bikes are still proportionally the largest, it has been shown that electric propulsion has now moved into nearly all model groups. The product group of e-mountain bikes is to be highlighted in particular here.

The increase in electrified carrier/cargo bikes is also noteworthy. This vehicle category is already making an important contribution to commercial and private cargo transport. This applies in particular to urban space, but it is also applicable as a supplement to the growing delivery commerce with environmentally friendly and space-saving concepts.

The road ahead for the bicycle

The trend toward cycling continues. If you look around German cities, enjoyment of bikes and e-bikes is clearly visible. After all, it is the ideal means of transport in inner cities, which are chronically overloaded with car traffic. In the leisure and tourism sector, bikes and e-bikes are omnipresent and indispensable. In mountains and forests, bicycles with electric support are also becoming a common sight.

If one looks for reasons for the decline in production sales of the classic bicycle, there are the following factors to consider, to name a few:

The German bicycle industry nevertheless looks confidently into the future. Bicycles and e-bikes offer a flexible, ecological, and above all important form of the individual day-to-day mobility for the coming decades. Every political faction has long recognized this and is increasingly promoting cycling. The federal budget for cycling was just recently increased to €200 million per year.

However, with regard to the forthcoming parliamentary elections, it would be desirable for bicycle traffic to become an even bigger focal point and for cycling to receive additional funding. It is only when cycling is granted the place in policy that it deserves because of its importance for sustainable mobility that its greatest potential can be tapped.

The Zweirad-Industrie-Verband is the national advocacy organization and service provider of the German and international bicycle industry. It includes manufacturers and importers of bicycles, bicycle components, accessories, and e-bikes.