Invoxia Bike Tracker is the first connected and antitheft reflective light. It integrates a GPS tracker with unmatched battery life – and it’s all sorts of ingenious.

Besides enhancing visibility on the road, this smart reflective light alerts bikers in case of a theft or damage attempt and allows them to geolocate their bikes on the associated app, in most European countries. It shows route history, notifies in case of an anomaly and allows to set up security zones. Bikers can finally act in due time and find their peace of mind. Invoxia Bike Tracker includes a 3-year subscription and has a battery life of up to 1 month.

The 1st Connected Reflective Light that Secures the Bike

Whether it is the choice of “Tour de France” enthusiasts, of Sunday cyclists, or workers who prefer pedaling on their way to work, bikes are more and more popular… However, over one-third in Europe are victims of theft or vandalism each year with a total estimate of 2.5M to 3M Bike stolen in the top 5 EU countries. As soft mobility gains ground, bike security is a serious concern for cyclists and anyone who’s thinking of taking up cycling or new electric vehicles.

Invoxia Bike Tracker is the solution to ensure the bike’s security whenever users leave it out of their sight: by day or by night, even if it is locked in a public place. Light and discrete, the connected reflective light mounts to the seat post or the bike’s cargo rack to make bikes more visible on the road.

Using low-power networks (no SIM card), Invoxia Bike Tracker is a portable antitheft device that can be used during and outside trips: once installed, it detects vibrations after a significant period of inactivity (> 5 min) and alerts the user, allowing him to act in due time. It’s also an anti-damage alarm that alerts the owner if his bike is suddenly shoved or overthrown when stationed. Featuring a battery life of up to 1 month, it charges in 1h30 through Micro USB.

According to Amélie Caudron, CEO of Invoxia: “Having our bicycle stolen is definitely the biggest fear of any cyclist! Featuring an antitheft alarm, our GPS tracker allows them to act immediately in case of an emergency. We also partnered with the police and helped retrieve hundreds of stolen vehicles. Alerts, geolocating and reactivity: Invoxia GPS tracker resembles all the qualities of a complete security device. It is also the ideal partner for safer mobility.”

A connected tracker to never lose anything again 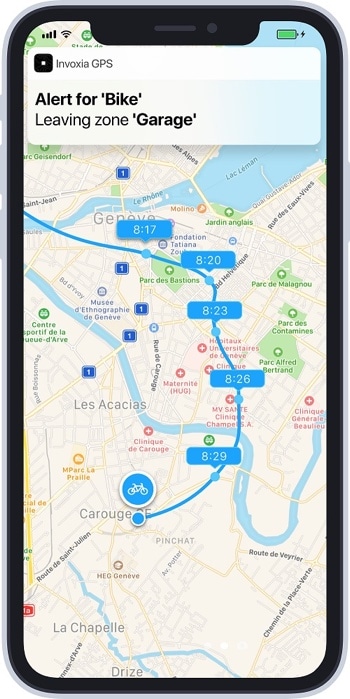 The companion app (free app available on iOS and Android) enables users to locate, track routes history in a selected time slot and set geographic areas so that they’re notified when the tracker enters or leaves that area. Easy to use, it works for anyone.

The Bike Tracker is suitable for the majority of individual vehicles thanks to its universal mounting system.

Unlike other trackers for motorcycles, it does not use a SIM card but works with low-power network Sigfox, which allows it to gain in autonomy and be more efficient than any other tracker. Specifically, it works for up to 1 month and charges in just 1h30 via USB – with no need to plug into the motorcycle battery. It also combines GPS and nearby Wi-Fi network locating technologies to offer the highest precision in every environment: city and countryside, inside and outside. It covers most European countries.

Contrary to other devices that require a costly monthly subscription, the Invoxia Bike Tracker is available with no additional cost: it includes a 3-year subscription to low-power networks. 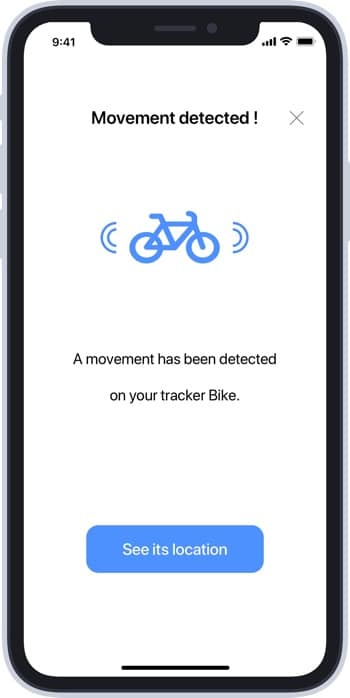 The Invoxia Bike Tracker is available at the price of 149€, including a 3-year subscription to the Sigfox low power network.

Invoxia specializes in smart devices integrating AI. The company develops and commercializes a range of consumer and professional trackers with deep neural network, allowing for instance to recognize pet behaviors (such as running, scratching, eating…). The company also created Invoxia Tracking Pro, a B2B complete and customized tracking solution for professionals, integrating a platform and a dedicated range of trackers. Invoxia also developed a predictive maintenance and defect detection solution for Richemont (Switzerland-based luxury goods holding company). Also known for its In Vivo Acoustic® technology, the company developed Triby, the first connected speaker compatible with Amazon Alexa Voice System and AppleHomeKit for the home. Invoxia is a French company founded in 2010 with offices in the United States and China.