The dreams of building a real, valuable product in today’s ever-growing market is a thought sought by many.

Yet, these individuals are often limited by their own skill or knowledge.

For example, a person may have an amazing idea for an AI-based solution but the chances of that idea actually being built are extremely slim unless the person: a) has an educational background in AI or b) has the financial resources to do so.

There are people who fit in the first situation or the other; the vast majority, however, don’t fall into either category which leaves their ambitions akin to a pipe dream.

One might argue that the existence of online learning platforms (like Udemy or Lynda) are doing their part in overcoming this challenge but the truth is this – these platforms do not bring students from A to Z in building real, functional products.

Instead, most courses cover only the surface, causing many students to lose interest as they cannot actually apply and use what they’ve learned because the courses are so basic!

Even if they complete a full course, it is highly unlikely for students to have the practical skills needed to build a complete product.

Luckily, a startup in the industry is rapidly overcoming these obstacles and they’re already making waves in the online education scene, with no signs of slowing down.

LiveEdu is a decentralized peer-to-peer project learning network for individuals to improve their job-related skills and knowledge in future technologies.

What makes LiveEdu different is that it doesn’t target the complete beginner; instead, LiveEdu focuses on individuals who already have basic skills but want to improve or learn more about a certain topic (think college students or working professionals).

Rather than focusing on theory, LiveEdu emphasizes the importance of application by using practical projects as a means to teach students to create real, functional products.

The platform also provides students useful project files to download and tinker around with to improve their skills even further.

Readers should note that LiveEdu is not the exclusive provider of projects taught on the platform. Instead, it acts as a network or platform for content creators to create their own educational projects and monetize that on LiveEdu.

Here are some of the things learners can expect from the LiveEdu platform:

Unlike other startups in the blockchain industry, LiveEdu has already been in existence since 2015 with several reputable team members from Amazon and Y-Combinator (the platform itself is a Y-Combinator company) which shows that the LiveEdu team is more than capable of delivering on their promises.

Over 1,000,000 users from just under 200 countries have used LiveEdu since its inception, with the platform boasting over 200,000 pieces of value-packed content as of today.

In line with LiveEdu’s expansion and integration with the blockchain, LiveEdu has added six different premium topics to its platform: game development, data analytics, design, augmented and virtual reality, artificial intelligence, and cryptocurrencies.

LiveEdu divides its services into two parts: premium and non-premium projects. The team has decided to shift its focus on premium projects which will be tokenized and powered by the blockchain.

Premium projects are built exclusively on the basis of teaching; they are also guaranteed to be well-structured and educational to deliver maximum value to LiveEdu students.

What differentiates LiveEdu from its competitors is that no other platform offers the sheer amount of details covered in LiveEdu’s premium projects which are designed to build complete products from start to finish.

So, why did the platform decided to use the blockchain?

For starters, the blockchain will make processes currently available in LiveEdu to become much more democratized and efficient for all parties involved especially on demand and supply dynamics.

A decentralized peer-to-peer network also allows users from all over the world to connect and learn seamlessly, making the global scaling potential of LiveEdu virtually limitless.

As mentioned earlier, LiveEdu is a profitable existing business with an experienced team to boot.

How does LiveEdu work?

The bread and butter of LiveEdu are the projects (premium and non-premium) available on the platform.

UI-wise, each practical project will include a live stream channel, a video project playlist, as well as a live chat window for instant answers to questions and requests.

If users miss out on live streams, they don’t have to worry too much about it as live streams are automatically archived by LiveEdu to be viewed at any time.

Content creators are not limited in their options as they can choose to either teach their lessons via a live stream or doing it offline – both ways work in LiveEdu.

With the interactive live chat, LiveEdu provides a level of interaction between students and teachers like never before; questions can be asked and answered directly in the live chat while learners also gain the ability to connect with other students in the community. 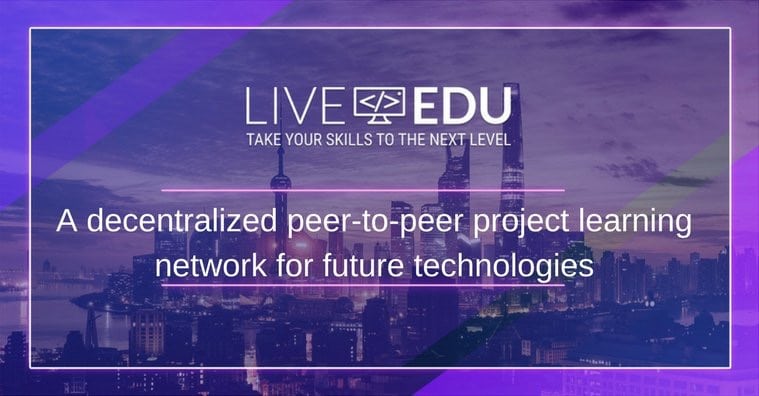 As already stated, premium projects are given more attention by the LiveEdu team to ensure quality is maintained for learners.

For instance, premium projects are streamed weekly on a schedule so that learners can organize their time for lessons. Projects are also moderated and checked strictly to maintain extremely high-quality standards among all projects.

One of the criteria to create premium projects is that a content creator must have at least 4 years of experience in his or her field to proceed; that alone shows you how much the team puts its focus on the quality of premium projects.

The LiveEdu team understands that the community wants to give their input on premium projects. Hence, they’ve created a system where requests can be made on LiveEdu where users can submit project suggestions which are then upvoted or downvoted by the community.

Bringing all of this features together is the platform’s utility token (ERC-20 compliant), the LiveEdu Education token or EDU for short.

EDU tokens are integrated into all of LiveEdu’s transactions and core modules. This means that it is used as a payment method for financial transactions as well as being used to reward users of the platform.

Every positive contribution of users in the LiveEdu platform is incentivized by EDU tokens to encourage a healthy ecosystem. Streamers, for example, have the advantage of guaranteed monthly payments (and for a lifelong period as well) when viewers watch their premium projects.

In the future, users can also expect to pay for subscriptions and services in the LiveEdu solely with EDU tokens; on the topic of payments, users who don’t have access to credit cards or PayPal accounts can purchase EDU easily with bank accounts and subsequently use the bought tokens in LiveEdu.

Uses of the EDU token

Aside from the features mentioned above, the EDU token has several other uses for it which include :

Content creators in LiveEdu are also incentivized in the form of EDU tokens for their efforts. The team reserves and fairly distribute 13% of all tokens minted during the ICO in a 3-year period—one of LiveEdu’s biggest advantages over other platforms in the market.

As the LiveEdu ecosystem rewards everyone fairly, learners are also incentivized for their time spent on the platform.

Learners can earn EDU tokens for:

Although the official token sale for LiveEdu begins only in January next year, the pre-sale for the EDU token is currently ongoing.