If you’re asking yourself, “Is it worth investing money and time in mining or is it just a fad?” or wondering how cryptocurrency mining works, read our article – we think it will answer those and other questions you might have.

Let us explain what mining is in simple terms.

What is cryptocurrency mining

You probably already know that Bitcoin and all other crypto coins (commonly called altcoins) are built on top of the core technology – the blockchain. Every single cryptocurrency transaction is heavily encrypted for anonymity and security. Once that encrypted transaction happens, it’s added to something called a “block” until a fixed number of transactions has been recorded. That block then gets added to a chain – the blockchain – which is publicly available (like a ledger). Since these blocks are heavily encrypted, they are much like complex math puzzles that only powerful hardware can solve. The process of solving the math puzzles on these blocks and adding them to the public blockchain, thus processing and verifying a transaction, is essentially what mining is.

Once mining is completed, the miners get a percentage of the transaction fee charged to the initial user who “ordered” the transaction. Besides that, in the above process, new coins are created. If there were no miners for a given cryptocurrency, it would cease to function as no transactions would be processed. Miners keep the network running and increase the coin’s global supply.

We hope that explains it!

However, things got more complicated since 2009, the year mining started. Mining cryptocurrency is like an arms race. The race for cheaper-yet-efficient machines have been on since the day one of Bitcoin.

With more and more people venturing into the world of virtual currency, generating hashes (solving math puzzles) for this validation has become far more complex, with miners having to invest large sums of money on deploying multiple high-performance machines. For example, it’s not profitable to mine Bitcoin with regular computers anymore, you’ll need to buy an expensive rig ($2,000-5,000). 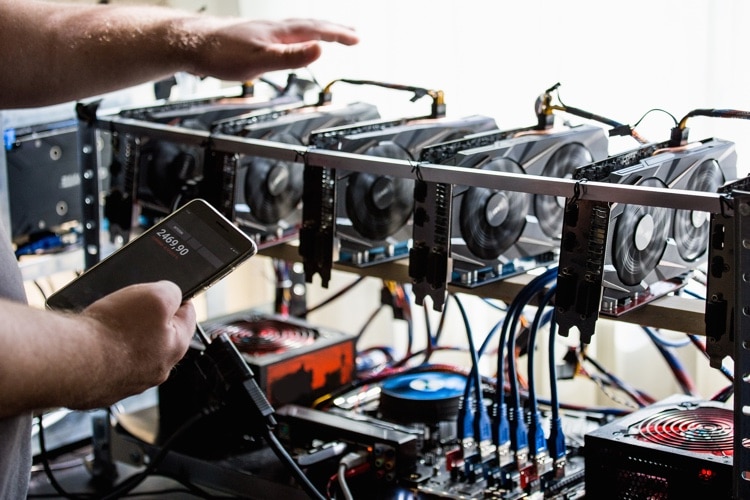 Mining cryptocurrencies consumes a lot of resources like electricity which is another factor to consider. Looking to cut their electricity bills, many crypto miners resettle to towns and areas where energy is cheap. This way, a sort of “mining heavens” come into being, like this one in Washington state, USA.

Huge power consumption also raises some serious questions about the sustainability of cryptocurrency mining and impact on the environment. It is estimated that the wattage required to generate one coin could power the average American household for 2 years.

Adding to the mix, government crackdowns and bans making mining illegal in some countries. You can never be sure what the future of mining will be in your country! For example, China used to host about three-quarters of the machines mining Bitcoin. As of February 2018, the Chinese government halted trading of virtual currency, banned initial coin offerings, and has plans to shut down mining. Many miners were forced to leave the country and move as far as Canada.

While some mine because they believe in the principles behind a certain coin and want to support it, others mine for profit.

Mining cryptocurrencies can earn good money for those who do it “professionally.” As a result, a kind of modern-day gold rush, or crypto coin rush, ensued, as many individuals have now become full-time miners and whole mining businesses sprung up all over the world.

If you’re considering Bitcoin mining and want to know how profitable it might be for you, you may use one of Bitcoin mining profitability calculators available online.

While cryptocurrency mining is not a reliable way to make substantial money for most people, it can generate a small income of perhaps 1-2 dollars a day using a commercial-grade hardware.

The profit from mining cryptocurrency only becomes significant when someone is willing to invest $2000-$5000 in specialty hardware, potentially earning $50 per day or more.

Today, Bitcoin mining is profitable for large miners. For beginners, newer cryptocurrencies like Litecoins, Dogecoins, and Monero, on the other hand, are best. This is because the complexity of the “puzzles” is not so high yet.

All things considered, for the regular folk, it can be almost as profitable to simply purchase coins from an exchange like Coinbase and wait until it goes up in value while sitting in a wallet.

The decision is yours.