Despite only being in existence for less than a decade, the blockchain has matured rapidly to where it’s being used in large-scale applications and systems. After the Internet, the blockchain is touted by experts as the next big thing to happen thanks to its unique properties.

When we talk about the blockchain, it’d be almost inevitable that cryptocurrencies would also come into play. Investments aside, coins like Ethereum and Bitcoin have changed how money is used in our everyday lives most notably in terms of costs. Sending money overseas or handling large transactions used to carry huge fees but with crypto, fees are negligible except for when the blockchain network is congested (which is rare).

Another useful feature is that since everything recorded on the blockchain is permanent and immutable, verified data cannot be changed for the benefits of any entity, not even for corporations and large institutions. Even if the data could be changed, the blockchain’s transparent nature ensures that any changes made are always visible to the public.

Of course, like most emerging industries, there are still some problems affecting the blockchain industry which has dampened its growth—one of them is the difficulty in introducing the blockchain to existing systems.

Not only is replacing legacy systems expensive, making the transition to the blockchain is also difficult due to gaps in the understanding of the technology. Skilled developers are hard to come by and even if they do, it’s not going be cheap which adds further to the already high costs.

At the same time, blockchain applications today are fairly limited, with most of it being exchanges, cryptocurrency wallets, or platforms that only use the blockchain partially. Ideally, the fragmented blockchain industry should be improved not only for the benefit of businesses, but also for your average Joe and Jane to realize what the blockchain can truly do for them.

Modex, a company based in Gibraltar, aims to do just that with its unique platform to connect smart contracts and applications in an effort to increase the adoption of the blockchain.

Modex is the world’s first marketplace for developers and interested buyers to trade smart contracts, a system that works similarly to the App Store and Github in one platform but for smart contracts and the blockchain instead.

According to the whitepaper, the Modex platform aims to:

With all of the features mentioned above, Modex hopes to make the blockchain more prominent in today’s society alongside establishing itself as the go-to platform for developers and businesses to manage their smart contract matters.

Modex has an extremely talented and experienced team behind the project, with employees having illustrious backgrounds with companies such as Oracle and Deloitte. Their experience in the blockchain industry is unparalleled as the team is also responsible for Moneymailme, a leading mobile money transfer app; Modex is also one of the few blockchain-based projects that already have a working product in the marketplace, with an alpha release accessible via this link. 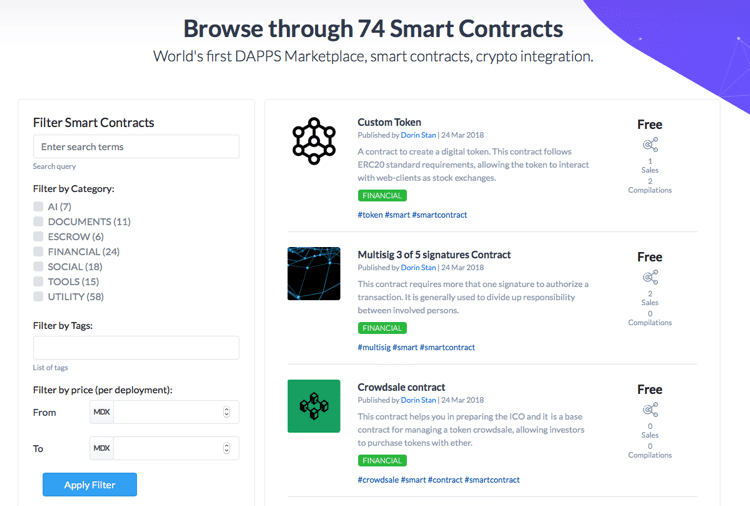 Leading the team is Mihai Ivascu, the company’s CEO, and his fellow colleagues Paul Mears and Alin Iftemi, also the company’s CFO and CTO respectively.

How does Modex work?

As mentioned earlier, the main product of Modex is its smart contract marketplace which also acts as an app development and deployment platform. The platform also has support for developers who are working on private blockchains in addition to integrating the Moneymailme app to allow users to send and receive money in several currencies (including popular cryptocurrencies). The Modex Developer Platform can be accessed https://dev.modex.tech and developers who sign up early for the platform will receive 1,000 bonus MODEX tokens in return for their participation.

Developers who wish to sell their smart contracts can do so by listing it for free on the marketplace. Buyers then acquire these smart contracts with the MODEX token (the platform’s utility token) and if they don’t find a contract that fits their need, buyers can commission developers to create custom smart contracts for them which again, will be paid in MODEX.

This allows companies to skip the headache of creating their own smart contracts by simply buying them and at the same time, allowing blockchain developers to have another profitable revenue stream. Users can test and interact with smart contracts before buying hence avoiding purchases that may not fit in a company’s system. Users who have no programming experience also have the luxury of editing the basic building blocks of their smart contracts thanks to Modex’s integrated customization tool.

To make the developer’s job easier, Modex has an IDE built specifically for smart contract developments which of course includes integration with popular services like Github as well as support for private blockchains and language libraries. Aside from improving efficiency, developers have the option of making their codes open-source for peer reviews or to allow trusted individuals to audit their code in return for MODEX tokens.

The team itself is involved with Modex as they provide custom, dedicated solutions to clients or existing smart contracts whenever necessary particularly in cases where client demands are not suitable enough for the marketplace.

Users can also use the Moneymailme app to store multiple currencies including fiat currencies and perform transactions within the platform. Fiat to crypto (and vice versa) exchange services are available on demand and a physical or virtual card can be requested by users if they want to spend their wallet balance outside of Modex.

All the features above makes Modex one of the best and most promising projects to look out for this year so be sure to keep track of the token sale as well as future updates.

Modex will be holding a token sale for the MODEX Token, the platform’s utility token. Aside from acting as the main payment method for products, MODEX tokens are also used to pay for things like fees for oracle services and access to a wide range of API tools.