Blockchained Virtual Reality platforms may sound like the future – but that connected, virtual and increasingly commercialized world is already here..

According to Forbes, Virtual Reality (VR) will be a $40 billion industry by 2020. Entertainment and gaming are just one subset of this. Whole virtual worlds, as well as enhanced experiences with a transactional, business element, are literally, just around the corner.

The crypto market, in contrast, has already dwarfed V/R. It is estimated to have a $700 billion market cap as of January 2018 and still rising.

It is where these two worlds meet that things really get interesting – and meet they already are.

Virtual and augmented reality companies are using blockchain to raise funds for new tech builds. They are also integrating existing V/R and A/R projects into blockchained environments. In fact, this combination of new technologies holds the best if not most unique opportunity yet to merge physical and digital realities as they are literally developing.

Project Districts is literally aiming to change the world. Namely, the start-up wants to create an environment where virtual and augmented reality projects can be hosted, accessed, developed and of course, monetized, via cryptocurrency. The system uses its own cryptocurrency (as opposed to an existing blockchain like Ethereum) to keep costs down.

The company plans to overcome the existing limitations of enhanced environments framework that include:

Complex to operate – Existing enhanced reality projects require an in-depth knowledge of existing technologies and frameworks. As such, at least to date, usage and further development have been limited to only a handful of industry professionals and tech-savvy enthusiasts.

Expensive to set up – AR and VR worlds require dedicated, high-end hosting infrastructure for hosting. Most of these exceed the budget ceiling of the everyday consumer.

Limited – Capabilities and applicable use cases are both in very short supply right now.

Project Districts is a panacea for all three problems.

The focal point of the Districts’ ecosystem is its users. Straight from launch, Districts will come with a pre-defined 3D world template, complete with existing entities and architecture. Users will be able to create their own custom entities on top of this world using the Districts’ visual studio (DVS). User-defined objects are commissioned into the entire ecosystem as flexible applications or DAPPS. In other words, the platform’s 3D world is a mini-verse of its own.

By exploiting the latent capabilities of blockchain, the Districts’ 3D world floats on a robust peer-to-peer system. The efficiency of this blockchain dramatically reduces the costs associated with setting up and running such ecosystems. The platform also comes with its own personalized developer tool.

What makes Project Districts really unique is its versatility and immense capabilities. From the retail industry to the education market, the Districts’ “blockchain train” is one that will be able to make a pit stop at every facet of human existence – from real-world to virtual and digital ones and even some in-between.

To begin to create and connect this world, the company leverages core efficiencies of both blockchain and enhanced reality. They are planning on doing this with the launch of the 3DCoin, the system token and driver of the Districts ecosystem. The benefits and capabilities of 3DCoin include:

The Details on Project Districts’ Ecosystem

The Project Districts 3D world is, literally, a world of its own. Real people, mom-and-pop businesses, global enterprises and everything in between, can, for the first time, have access to a full suite of V/R and A/R capabilities and tools. Unlike traditional AR/VR technologies that allow for localized visualization and limited interaction, Project Districts’ environment allows for visualization, interaction and real-time participation with actual and real-life consequences.

Using this technology, a consumer can walk into a virtual shopping mall and make a purchase. They can also receive valid receipts and obtain real-life delivery.

This consequential and monetized aspect of the platform also ensures that the developing ecosystem will be able to attract the most cutting-edge developmental platforms and emerging applications.

So what could be launched now using this platform? The possibilities are already awesome.

High-end applications – The Districts’ Visual Studio has native support for the development of a broad range of applications which can be commissioned into and with the ecosystem as a DAPP. A user-defined DAPP could also be just about anything. It could be as basic as a virtual key or as complex as a full-scale digital environment. Tech partners including Unreal Engine, steam VR, Oculus, and Allegorithmic are just a few of the existing tech companies already in the mix – and that list is just the beginning.

Provision of Real-World Utilities: The platform’s 3D world provides a solid basis for the establishment of enterprises that provide virtual and value-added services that can be accessed in real life. Digital entrepreneurs can set up custom entities including shopping malls, online virtual classrooms and even virtual health facilities. Remember, unlike scaling a regular business, virtual environments dramatically lower the costs of both starting and running most kinds of businesses.

Advertisement and Content Provision: The platform’s immersive world provides a fertile ground for all forms of targeted advertising. This could include a digital banner in a highly trafficked digital gaming environment. It could be, in fact, any digital brand presence and signage in any virtual environment. The sky, literally, is the limit.

Networking and Social Interaction: The worlds created by the platform will be a great place to meet new people. And users can meet in real time and via custom-avatars, or they can join chats. They can also “socialize” via online events hosted on the ecosystem. 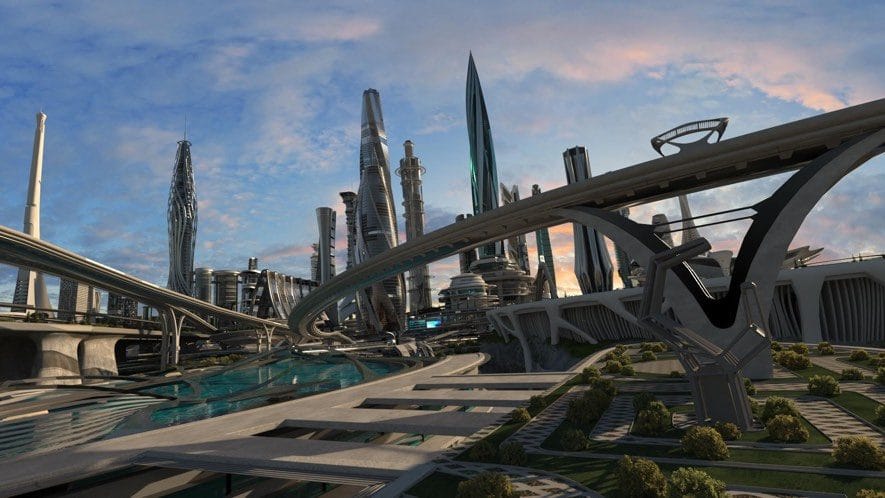 Here are the details of the upcoming Project Districts token sale:

Token supply: 150 million tokens will be sold (75% of the Coinbase)