Have you ever heard of Hangar18 or Noa?

If the answer is no, then it’s not extremely surprising, seeing as the Croatian company or its products aren’t exactly popular on the market. However, they were present at the Mobile World Congress this year, where they showed everyone the extent of their passion, materialized into a new line of smartphones.

Announcing the NOA H10le, NOA H2 and NOA N5, the team at Hangar18 showed the world that there is more to the smartphone market than just the cookie-cutter products shoveled out by the well-known titans.

Hangar18 is the first Croatian smartphone manufacturer, and has just revealed plans to start selling products in 14 countries.

The CEO of the company, Mario Kralj, stated that "It is no small thing to stand shoulder to shoulder with the largest players in the industry," and that the one thing that gives them the confidence needed to compete against the tech titans is the great selection of products they chose to present.

The three smartphones announced show a lot of potential, and may be just enough for the people behind Hangar18 to make a name for themselves, and to push the Noa brand out of obscurity.

Noa’s Element H2 smartphone is the low-end offering for those who are looking for a cheap and accessible phone. The phone offers a 2250mAh battery, a 1.3Ghz Quad Core processor, 2GB of RAM, 16GB of internal storage, 4G LTE connectivity, dual SIM functionality and a 5-inch HD display, running Android 6.0. The H2 has a great, 13MP rear camera and a normal 5MP frontal one.

The Element N5 is an upgrade over the H2 in every possible way, representing the perfect mid-range phone for those who want performance, yet don’t feel like shelling out the money required for the high-end smartphones. This device has a 5.2-inch full HD display, a 1.5Ghz Quad Core processor, 4GB of RAM, 32GB of internal storage, a 3000mAh battery, 4G LTE connectivity and dual SIM functionality. This phone is also running Android 6.0, but unlike the H2, it offers a 13MP camera both on its backside and on its front, making it a great deal for selfie fans. 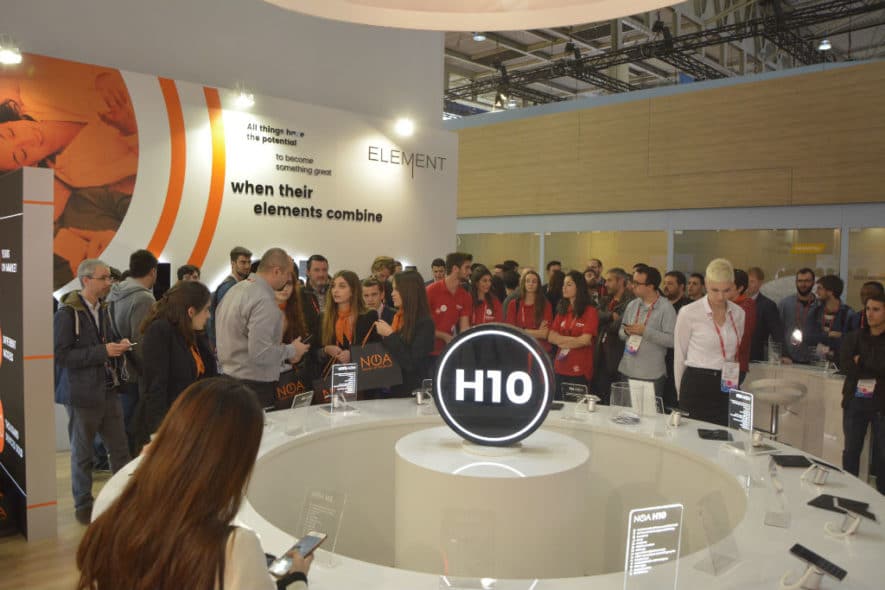 The star of the exibition was the H10le (limited edition) model in Matador Red color with an AMOLED screen, a 64 GB memory and 7.1 milimeter body thickness.

As attractive as the previous two smartphones may be, the Element H10le (limited edition) was the star of the show. Boasting a ridiculous MTK Helio X27 Ten Core 2.6GHz processor, 4GB of RAM, 64GB of internal storage, 4G LTE connectivity, dual SIM functionality, a 4000mAh battery, all under a beautiful 5.5-inch AMOLED display, the Element H10le is a true mobile powerhouse. This model runs Android 6.1, which is a shame given that the other phones in its spec range will release with Android 7.0, but perhaps the phone will receive an update at a later time.

All in all, even though the Noa brand may not be recognized by most people outside Croatia, the three smartphones announced at MWC 2017 have a lot of potential to bring Hangar18 into the club of popular phone manufacturers.