Yancey Strickler, one of the co-founders and current CEO of the largest online crowdfunding platform, Kickstarter, argues that crowdfunding may be in crisis, but founders should not be discouraged by failed projects.

Yancey grew up on a farm in the state of Virginia, US. He worked as a music critic for “Village Voice” and “Pitchfork” before teaming up with Perry Chen and Charles Adler in 2009 to form the crowdfunding platform, Kickstarter.

Strickler became the CEO of the New York based company in 2014.

Kickstarter is the largest platform for investment on the Internet. Innovators and creative people sell their ideas and projects on the platform to gain financial support from similar minded people and/or businesses.

When celebrating the platform’s seventh anniversary, Strickler mentioned that Kickstarter has 137 employees, most of whom work in the company’s headquarters situated in Greenpoint, Brooklyn.

45 percent of the team supports backers; another 45 percent designs and codes the platform; and the remaining 10 percent support the company itself.

In 2015, the team grew by 20 percent, with people joining from Google, O’Reilly Media, and Facebook, as well as from The New Museum, the American Association of Independent Music, New York Foundation for the Arts, Brooklyn Academy of Music, and the Film Society at Lincoln Center, among others.

In the 7 years that the company has been in operation, the community has successfully funded over 100,000 creative projects, attracted over 10 million backers, and collectively raised over $2.3 billion. 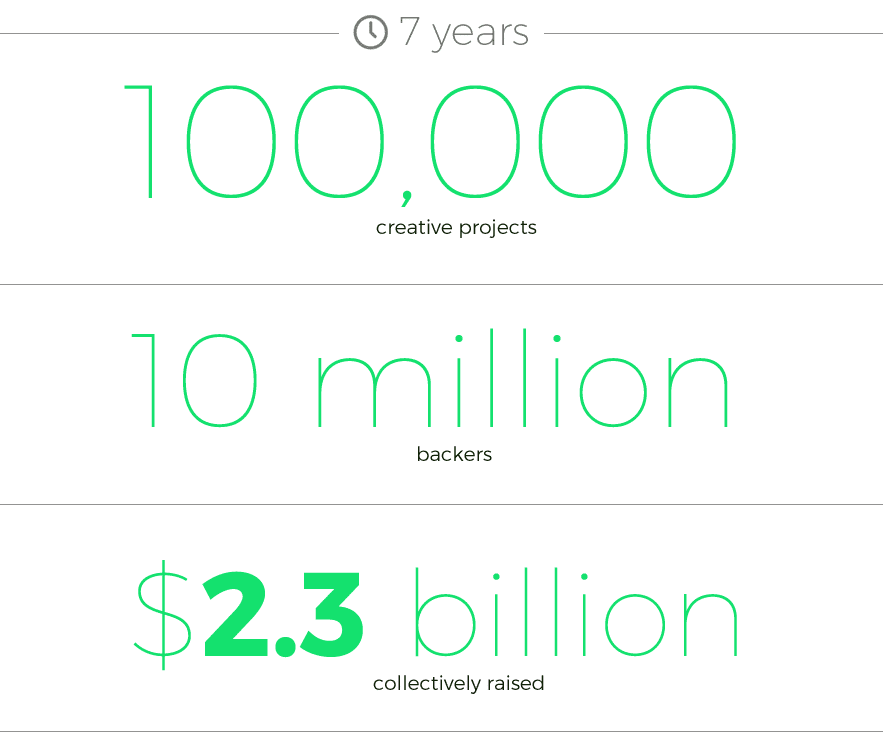 There are many other major successes, including: 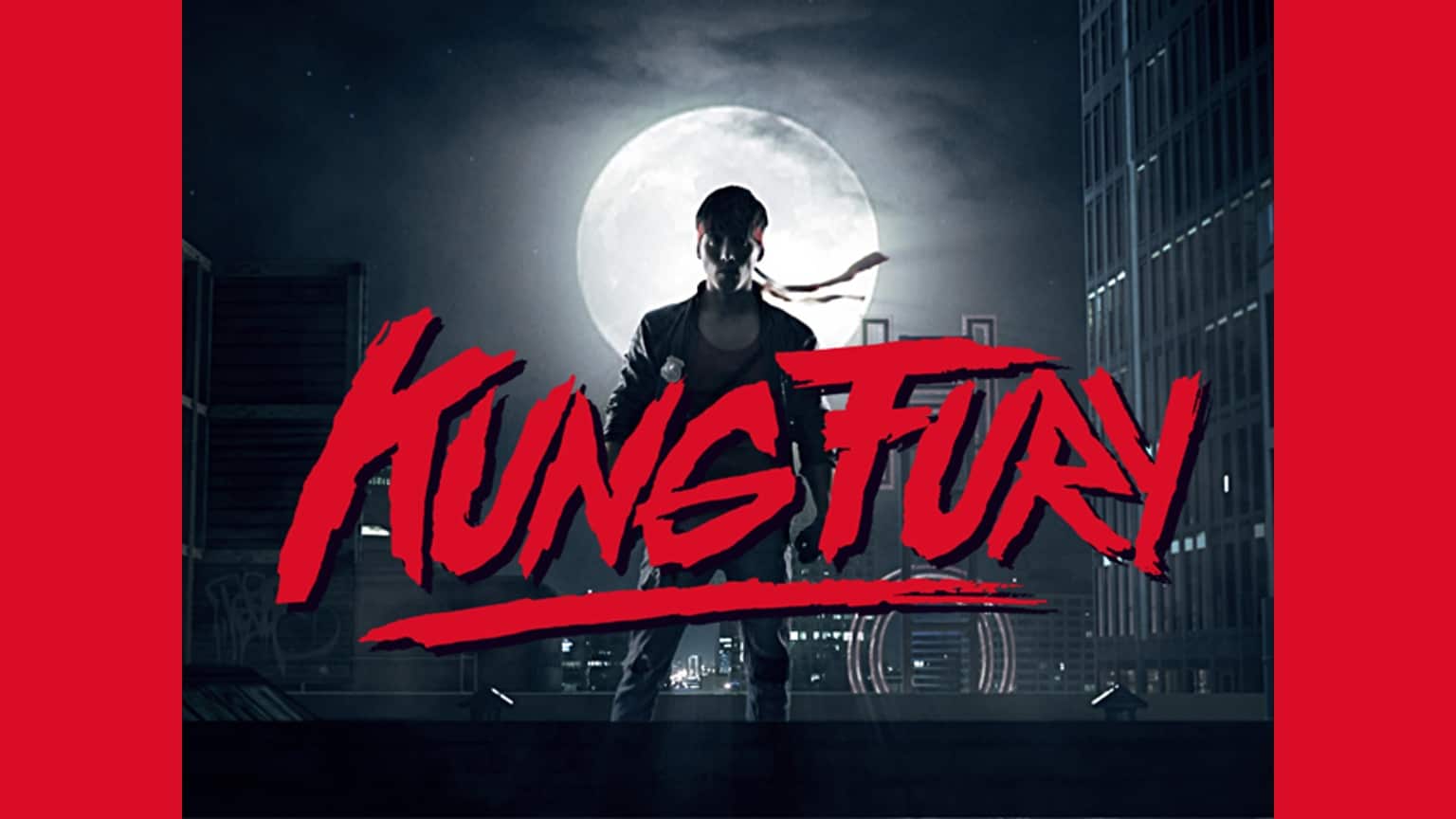 The platform has helped bring a lot of projects to life that would have, otherwise, taken longer to get public attention or perhaps never got initiated in the first place.

To help facilitate even more success stories, the team has worked on a range of projects.

The most recent ones include:

While there are many successes, Kickstarter has also faced a number of risks and challenges.

campaigns on Kickstarter have collectively received funding worth
2.3

So far, the campaigns on Kickstarter have collectively received funding worth 2.3 billion dollars in the different categories including gadgets, movies, etc.

Some of the most innovative and famous projects on Kickstarter have gone on to be acquired by top companies, like Oculus Rift, a virtual reality gear company that was acquired by Facebook.

But not all projects that are 100 percent plus funded end up becoming successful businesses. Most recently, the Zano mini-drone project, which was Europe’s most successful Kickstarter campaign by raising over 3 million dollars was shut down by the company behind it.

But Strickler argues that many things can go wrong when trying out something new. In a recent interview with the German “Spiegel”, Strickler stated that 9 percent of all campaigns on Kickstarter fail after having raised 100 percent of the financing they need just because the project initiators get overwhelmed or get in a fight with each other.

With crowdfunding, anyone can propose their idea for funding. But it is up to the backers to decide whether or not to give their money to a certain project.

That said, a project that hits its funding target but goes on to fail is something that Strickler considers the worst case scenario in crowdfunding. With Kickstarter, these failed projects must disclose how they used the funds to their investors and backers.

According to Kickstarter’s Terms and Conditions, companies declared bankrupt should not simply vanish from the scene without first ironing out things with their investors and supporters.

If, however, these terms are violated, the supporters can complain and even proceed with legal action. On Kickstarter so far, there has only been one case where the project initiators were sentenced.

One other concern that supporters may have is when a project creates the claimed product, but instead of delivering the promised perks, they first release the product to the market.

While it does not seem fair to the supporters, most of these businesses need the revenue from the sales in order to survive.

Sending the perks right off the bat may strain the start-ups. According to Strickler, this is not necessarily a bad thing, especially if the companies fulfill their obligations at the end.

According to Strickler, Kickstarter due diligence process takes two approaches:

First, the platform’s employees assess all proposals in advance before listing, with a particular focus on hardware-based projects. With over 130 employees, this is a thorough process for every application. Any hardware-based project must create a video in its pitch, so the team investigates whether the prototype actually exists, or the video is simply a simulation of what the initiators think they can create.

Second, the general public scrutinizes each pitch/project and notifies the administrators of any irregularities.

Moreover, Kickstarter requires that every project creator outline the Risks and Challenges of their project.

Moreover, Kickstarter requires that every project creator outline the Risks and Challenges of their project. There are a number of projects that face fulfillment challenges, while others become high-profile because of them.

To bring transparency to the issue of fulfillment, the platform launched two major projects. They collaborated with The Wharton School of the University of Pennsylvania to conduct the biggest study of Kickstarter project outcomes.

From the survey of more than 500,000 creators and backers, the Kickstarter Fulfillment Report found that 9 percent of projects do not deliver the product. In the case of the highly funded Zano project, the project creators did not provide an explanation of why they stopped their operations.

Following the astonishing failure of the highly funded Zano project, Kickstarter commissioned a journalist to investigate what went wrong.

It was revealed that, ironically, it was the unexpected success of their Kickstarter campaign that overwhelmed the initiators.

After the investigation, an independent 10,000 word report of what happened was published several weeks later.

The company does not check the financial situation of the project initiators though as this would contradict Kickstarter’s basic principle: being a platform for creative projects.

. Most common and generally successful projects

Most of the successful projects on Kickstarter are actually board and card games, which tend to draw a sizeable group of supporters; but established companies may not necessarily consider it worthwhile to create such games and bring them to market.

On the other hand, a startup with a simple idea can be supported by thousands or tens of thousands of users to quickly raise enough funds to bring it to fruition.

For instance, for the last six years, the arts and culture category in Kickstarter receives at least one film that gets successfully funded through the platform and goes on to receive an Oscar nomination.

The most common projects on the platform are simple wallet designs. According to Strickler, wallets are an easy first project that requires minimal materials, plus their production is fairly easy to organize.

Based on a successful first project, many designers then proceed to create a second, completely different project. It is a smart way for creators to experience crowdfunding, learn to interact with backers, and set realizable goals.

Strickler argues that art and creativity give anyone the means to shape and comment on the world. They play a vital role in society, yet remain underappreciated.

The platform acknowledges and celebrates creators who devote their time and energy to create and appreciate art, culture, and creativity.

According to Strickler, the co-founders are not looking to maximize their profits from the company.

In changing the company status to a Public Benefit Corporation, the founders have agreed to donate 5 percent of their annual profit.

The platform’s mission is to help artists and creators realize their dreams and visions, and in doing so, give them the opportunity to live sustainable creative lives.