OSA Decentralized (OSA DC), a team of experts in artificial intelligence, blockchain technology and the retail industry, has launched a token sale.

The company’s goal is to use the capital raised in the sale to scale their AI-powered blockchain platform and provide the entire retail industry with a much-needed digital overhaul.

Due to antiquated, analog-based systems still used in product ordering, shipping, and inventory management, retailers lose more than $400 billion each year. This also causes overstocking or under-stocking, as many stores fail in their efforts to manage inventory based on customer demand. Supermarkets and grocery store chains lose an additional $100 billion annually when high volumes of unsold perishable foods pass their expiration dates and are discarded.
OSA DC’s data and retail experts are dedicated to bringing order to the industry’s chaos by leveraging their AI, blockchain and smart contract technology. This will ensure that every bit of data generated by manufacturers, farmers, shipping companies, or grocery stores on a retailer’s supply chain is tracked by everyone else. Because of the transparent and incorruptible technical characteristics of a distributed ledger system that defines blockchain technology, OSA is confident there will be greater trust between retailers and their partners and product waste will be eliminated. 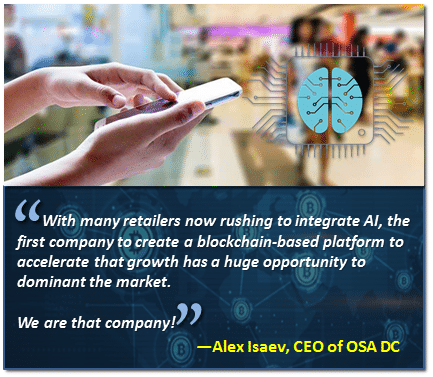 “There’s a massive shift underway in retail right now. Supermarket chains in every country are trashing their antiquated, untrainable retail management software programs and replacing them with trainable, cloud-based algorithms and in-store robots enhanced with artificial intelligence,” said Alex Isaev, CEO of OSA DC. In fact, according to an economic forecast published by the International Data Corporation (IDC), retailers worldwide are spending $3.4 billion — this year alone — on a range of AI systems, including robotic shopping assistants and omnichannel operations. “With so many retailers rushing to integrate AI, the first company to create a blockchain-based platform to accelerate that growth has a huge opportunity to dominate the market. We are that company.”

2,285,714,285 OSA tokens have been issued with 45% of tokens (1,028,571,428) available for purchase during the sale (1 OSA token = 0.0002 ETH). The company anticipates it will raise up to $40 million in the offering, with 39% of the funds to be used for Product Catalogue and Image Recognition Development, 21% to be invested in Core Product Development, 18% to be invested in R&D, and 17% to support Business Development. OSA DC’s goal is to use capital raised in the sale to enrich the existing solution with image recognition model and comprehensive product master data catalogue, mount it on AI-powered decentralized blockchain platform and scale it starting with the biggest markets – USA, China, Japan and South Korea and eventually worldwide.

Consumers will be able to use OSA Tokens to pay for B2C services, receive exclusive promotional offers and, of course, purchase groceries at major supermarket chains in Europe, North America and the Asia-Pacific region. Managers at partnering supermarkets agree with OSA’s founding team of data scientists that cryptocurrencies, including OSA tokens, will be a standard, widely-accepted form of currency at grocery stores and retailers worldwide. Currently in the U.S., 13 national retailers now have payment options for cryptocurrencies.
Since it was founded in 2015, OSA DC has generated more than $1 million in revenue by partnering with 20 retailers. The company provides services to major international brands including Coca-Cola, Mars, L’Oreal, Nestle, and Metro Cash & Carry.

For both retailers and brands, the company deployed the OSA Hybrid Platform, an AI-powered, Big Data platform that autonomously manages a store’s inventory, drastically reducing the frequency of out-of-stock items and improving revenues by an average of 5.4 . After 3 years of R&D and testing the platform through its partnership with Efficient Consumer Response (ECR), an organization representing more than 70 of Europe’s leading manufacturers and retailers, OSA DC’s founders are ready to deliver their platform and proven solutions to retailers and supermarket chains worldwide.

“In my 50 years in the industry, I’ve developed and executed many systemic changes in retail operations”, said Don Swann, former Walmart executive and currently the President and CEO of Cygnus Familia. “Of all the changes I’ve made to make my stores more efficient, none have had the full potential and customer trust that I’ve seen with the OSA Hybrid Platform. This is truly a game changer!”

Blockchain records, stores, and tracks complex digital transactions and detailed product data and then makes the data accessible to everyone on a retailer’s supply chain. Due to these functions, blockchain’s democratic, transparent technology is likely to have the greatest impact on consumers. Whether information is delivered to them through a smartphone app or a speaking, artificially-intelligent robot assistant in every store, shoppers will have access to a wealth of data about every product they’re considering for purchase while they’re in the store shopping.
With the unprecedented buying power it implies, shoppers will access competitive pricing information, extensive details about the ingredients of a food product, and whether it meets the specifications of their diet. In-store robots can instantly access and update what the robot “sees” when the shopper walks into the store. Consumers will know the name and address of the farm where a chicken they’re buying was raised or, if they’re about to buy a tuna from the “Fresh Fish” section of a grocery store, they’ll know instantly when and where the tuna was caught. Of course, they’ll also know whether the store’s advertising is accurate because they will be aware if the fish is authentically “fresh”.

All of this data – and much more – will give consumers a level of authority in retail they’ve never had previously. The emergence of well-informed, powerful shoppers explains why supermarkets are scrambling to be the first in their geographic or vertical retail market to integrate AI and blockchain technologies. Embracing such technology now will do much more than save retailers money and minimize waste; it will also give consumers the power and respect they have long sought from retailers for generations.

During the sale, 100 OSA Tokens will be given away daily to one lucky Whitelist subscriber. Interested? Visit: http://www.osadc.io/en/100token-rules

To learn more about OSA DC and participate in the token sale, visit: www.osadc.io

To join the conversation on Telegram and speak with the company’s founders and developers, visit: https://t.me/osadecentralized