Do you travel a lot, especially by plane? If yes, then you surely know just how important the luggage you travel with is.

How many times did it happen that you lost your luggage or you got it back at the baggage claim department partially destroyed? Even if your answer is “never”, you can imagine the frustration and maybe downright anger one feels when such an incident occurs.
In order to avoid such a situation, choosing the right suitcase is an important decision to make, but definitely not an easy one. So, in order to have no trouble whatsoever regarding your suitcase, we suggest that you take a closer look at Horizn Studios new trolley model: the Cabin Trolley Model M. 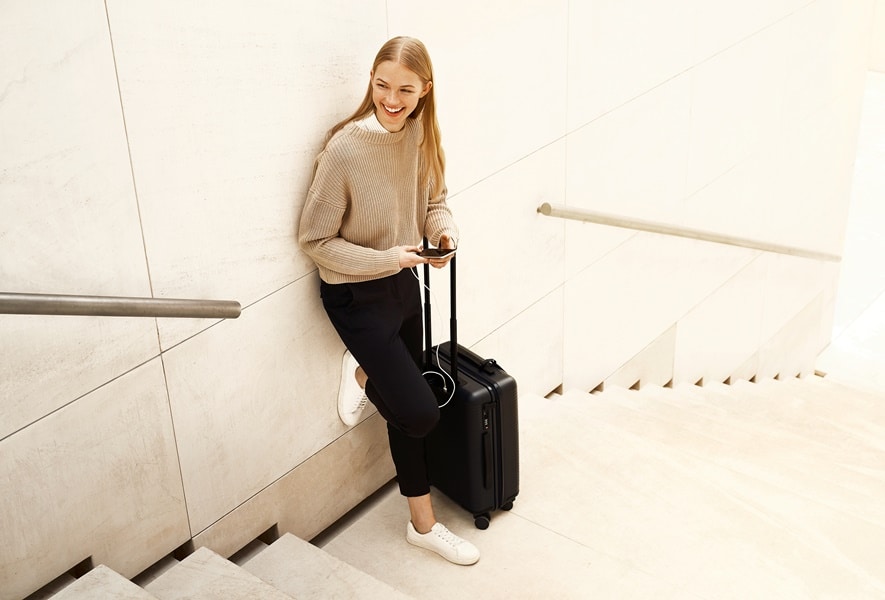 Before analysing the specifics of this elegant and practical cabin trolley, we should note what and who it was designed for. The idea of making such a suitcase came to Stefan Holwe, the co-founder of Horizn Studios. A long distance traveler with quite some experience when it comes to flying, Holwe wondered if he could improve the average cabin trolley so that it would better fit the needs of the modern person. In our day and age, most passengers want to easily pull out and store their laptops, tablets and smartphones. Let’s see what makes this trolley suitable for such a purpose. 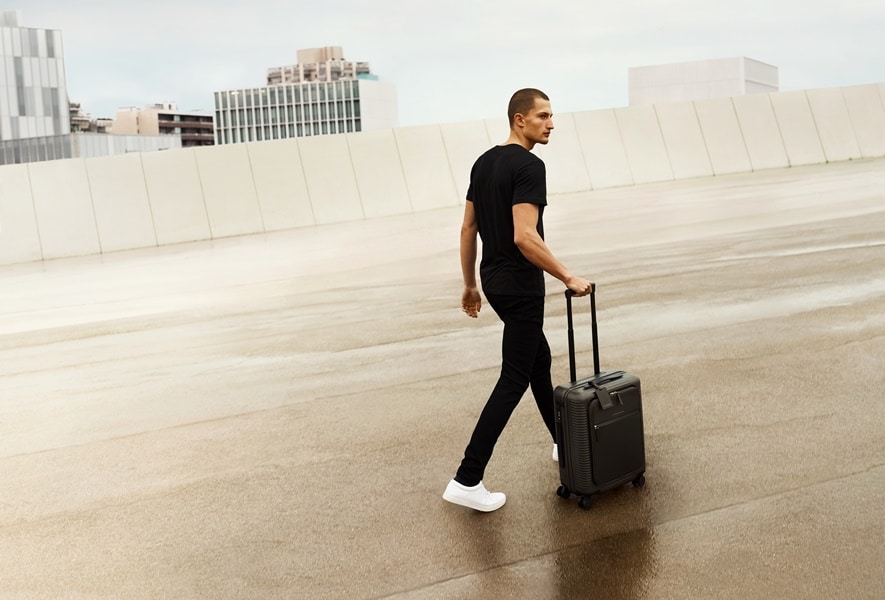 The Cabin Trolley M has a compact case made out of a German Polycarbonate hard shell, a very resistant material, with an additional practical Vacchetta leather front pocket that completes the smart design. The hard shell lowers the risks of breaking or damaging the trolley during trips, so you don’t have to worry about airport employees handling your luggage rather roughly, while the front pocket is big enough to fit a 15” laptop in it with ease. I’ve traveled between London and Berlin 3 times over the last few weeks with Ryanair and each time was asked to check in my luggage. I was happy to have quick access to the Tablet and Laptop at the front to quickly remove it and confident, that the remaining items inside the Cabin Trolley will survive whatever is thrown at them.

Just because it is resistant to shocks doesn’t mean that the trolley no longer is aesthetically pleasing; in fact it’s the opposite. Its blueprint is signed by Jaimal Odedra, a well-known name in the designing industry who has already collaborated with brands like Calvin Klein, Givenchy, Mulberry and Ralph Lauren. Thanks to him, the Cabin Trolley M from Horizn Studios could easily be confused with a model belonging to luxury brands. 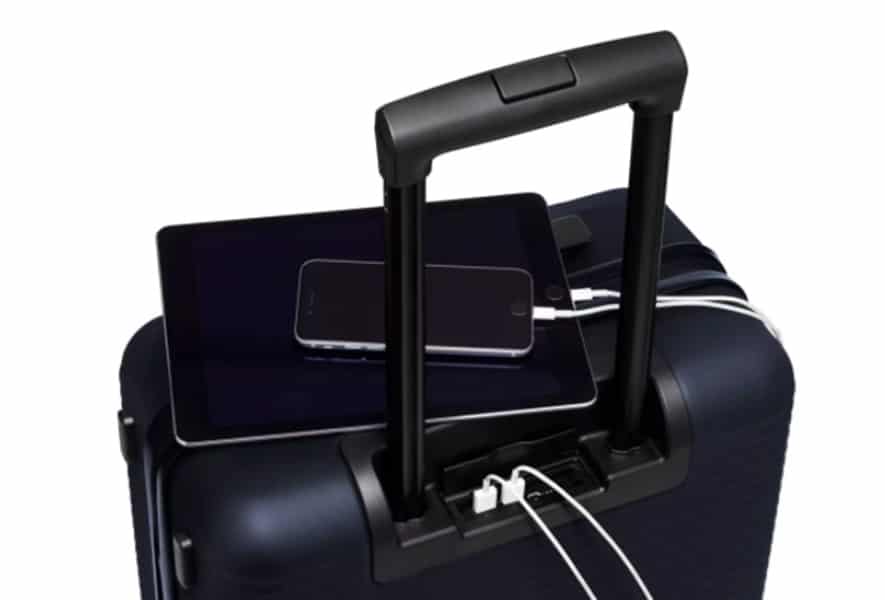 The wheels of a trolley may not usually be considered important, but they are one of the most important parts. The most innovative change in this family of products was the evolution from 2 to 4 wheels. The Cabin Trolley Model M is equipped with 4 double silent Japanese spinner wheels which can rotate 360°. This basically means that if you suddenly decide to change the direction in which you were headed, you can do so without having to realign your trolley to the new walking direction first. Despite their incredible mobility, the wheels are also very robust, with little to no chance of breaking. However, this mobility comes with a downside: when using the trolley in trains or on inclined flooring, you will have to set the wheels perpendicularly on the traveling direction or they could easily lose your luggage.

The size of the trolley is 40x55x20 cm and it is guaranteed that you are allowed to take it into the cabin of any aircraft, regardless of the airline company. The trolley weighs only 3.4 kg including the battery when empty and has a volume of 33 liters, making it easy to handle, while giving you enough space to store everything you need for a short trip. The inside has two compartments: the left side is separated by a net attached with a zipper, while the right side is designed mainly for clothes, having a compression system with two straps. 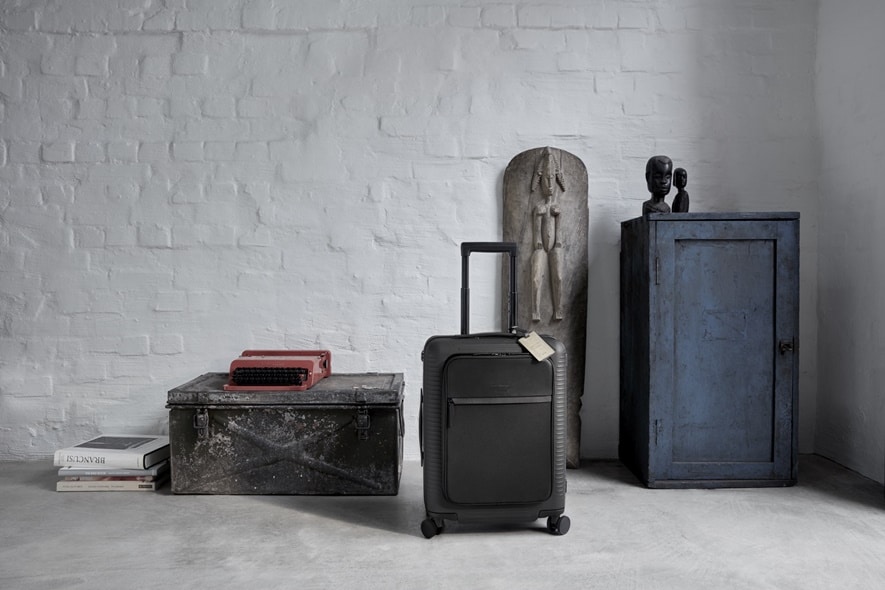 One ingenious feature is the included battery: the Model M trolley has a 10,000 mAh in-built lightweight battery that is both removable and rechargeable. The battery has two USB ports (one normal and one fast charging) so you can charge two devices at the same time and it can completely recharge your phone six times on average. It also has a mini-USB port that can used for recharging. However, since the battery is removable, you don’t have to keep it in the trolley and you can just take it out whenever you want to travel lighter or use the it without the trolley.

An interesting, and quite essential add-on is the GPS system. Over 25 Million Suitcases get lost each year. This feature is optional and costs an additional €99.00. Having the GPS add-on means that there is a tracking system incorporated in the suitcase that connects to your phone. It’s a little 3rd Party device, which you can activate before traveling. Having this means that no matter where you are, you can get information about the whereabouts of your luggage. Other features include a TSA-approved lock, a small laundry bag and a shoe bag.

Finally, all of these features come at €299.00, which might sound like a lot of money for a Cabin Trolley, but if you compare the Model M from Horizn with other suitcases that have approximately the same quality, features and sizes, the price is very sensible. Horizn Studios’ direct to consumer business model always assures, that you will receive a high quality product at a competitive price.

More about the Future – an Interview with Stefan Holwe 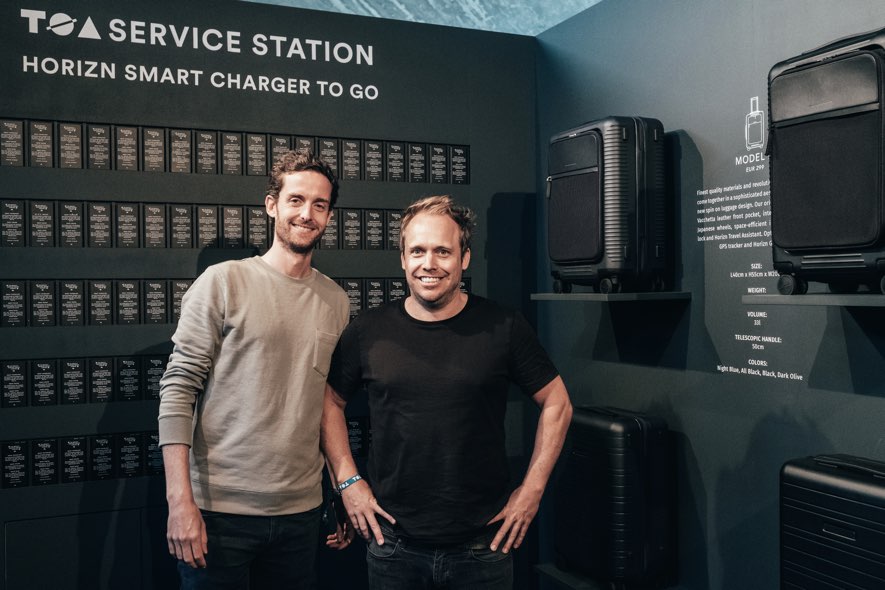 According to an exclusive Chipin interview with Stefan Holwe during TOA17, the Horizn Studios company has great plans for the near future, including becoming the “Nike” of the luggage market. Being the first smart luggage manufacturer based in Europe, it’s only natural that they have what Holwe calls “the greatest reach and penetration in the next generation of travelers in Europe.” The fact that they are based in Europe is, in Holwe’s vision, a blessing, as the more demanding and critical European consumers call for higher quality products.

Despite the fact that their smart luggage is mostly known for its smart features, namely the in-built external battery, Stefan Holwe claims that their products are smarter than most realize, as he calls “smart price” and “smart design” important factors in their success.

As for the near future, the interview revealed that the company plans to create a comprehensive mobile app that will allow users to track their journey history, display facts about their travel routine and even opt to send their luggage from the airport to your hotel, when the infrastructure will allow it.

Along with a new partner, Horizn plans to relaunch their Smart Travel Assistant service which comes with every smart luggage. The service effectively gives each user access to a knowledgeable travel concierge that can give them recommendations regarding flights, hotels and places to visit.

In terms of new products, Horizn plans to expand their new professional series, which currently hosts the DJ trolley, with a trolley for photographers and film-makers. They’ve just launched the brand-new H2 Series, a very smart & elegant solution at a cheaper price point. In October, they plan to release two new lines of backpacks, one similar in features and look to the smart trolleys, which will be light and functional at the same time, and one intended for demanding outdoor activities, such as Burning Man, which will be developed in partnership with Habitas. 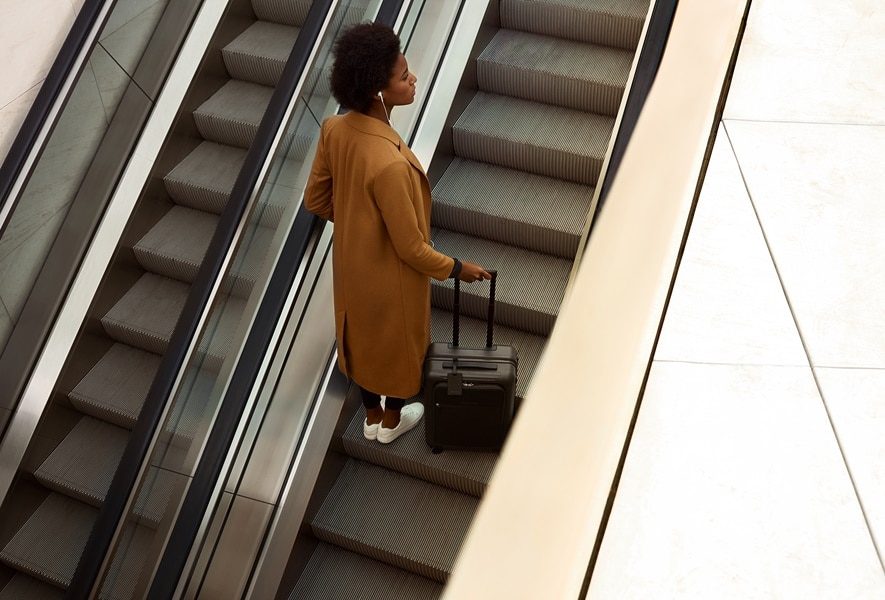 We have tested the Cabin Trolley M for several weeks and have been very impressed with the design, usability and the smart features and are looking forward to the new range of products over the coming months.
All in all, it seems like Horizn Studios has decided to provide suitcases that fit the needs of different target groups and so far they have done a great job.

Horizn Studios were kind enough to offer a 22% discount on the Cabin Trolley M in Blue. Please use the discount code: 22ANDBLUE during the checkout.

Have you ever wanted to improve your travelling experience by having a smart luggage? Luggage company Horizn Studios has done just that.