In conjunction with the debut at IFA Berlin, Fantem announces the European launch of its award winning smart home system, Oomi.

Oomi’s patent pending Tap-and-Touch™ technology sets Oomi apart from other systems by allowing for effortless setup and configuration. With just a tap, Oomi devices are instantly recognized and included into the home automation system without the need for any complex steps or programming. This simplicity ensures that even consumers with limited technical savvy can enjoy a connected home.

An Oomi smart home allows for wireless control and automation of home lighting, entertainment, security and more. It provides superior in-home control and monitoring right from Oomi Touch, the dedicated touchscreen super remote, and remote access and control while away from the home using the Oomi App for iOS and Android devices.

At the heart of the system is Oomi Cube and Oomi Touch. Cube, a hub with unrivalled functionality built on the Z-Wave® Wireless Mesh Network Technology, is also a super accessory with a built-in WiFi camera with night vision and six sensors including motion, light, temperature, and humidity. Oomi Touch, the dedicated in-home controller is encased in edge-to-edge glass and includes both tactile buttons and capacitive touch controls, offering control of smart home devices as well as television and music.

The Oomi Home Kit, which consists of Cube, Touch, Infinity Dock, two Oomi Bulbs, and one Plug offers a great start to a smarter home. Consumers can enhance security, control and automate their ambiance and environment, monitor and reduce energy consumption, and control their legacy devices that use infrared commands such as TV and climate systems. From there, customization is a breeze as the Oomi line of branded accessories offer a high degree of versatility for the system which is already set apart by its simplicity. 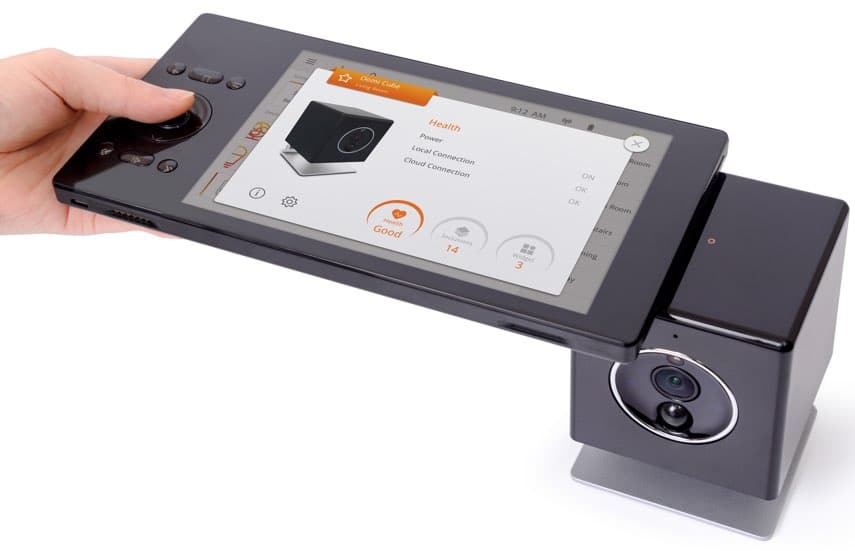 Oomi Bulb: Control light output, including color and hue, just by screwing in this RGB bulb. With the ability to render millions of colors, the Oomi Bulb offers brilliant color or white for perfect ambiance any time of the day or night.

Oomi ColorStrip: Millions of colors and white light in a flexible 5-meter strip that can be trimmed to accommodate many ambient and direct light settings.

Oomi Door/Window Sensor: A contact sensor used to monitor the opening and closing of windows, doors, cabinets, drawers and more.

Oomi Air: Monitor airborne pollutants that cause risks to you and your family and record environmental quality. Oomi Air measures PM2.5 as well as Volatile Organic Compounds

Oomi WaterSensor: A device that can be used to detect the presence or absence of water and can aid in the identification of leaks. The optional dock can help monitor water levels in pumps and other tanks.

In addition to Oomi components, consumers can add their existing Philips Hue lights and Nest thermostats as well customize their home with any Z-Wave smart device. Starting today, the latest Oomi smart home technology will be available for order at Oomi.com and through select retailers including Xura Domotica and Domadoo, with distribution through Z-Wave Europe.

The complete Oomi product portfolio will be showcased during IFA show in Berlin at the Z-Wave Pavilion.

Fantem is focused on enhancing peoples’ lives through the development of innovative lifestyle products and solutions. From simplifying the smart home to creating the first ever 3D lens for action cameras, Fantem is re-imagining the technologies that make life more enjoyable. In 2014, Fantem began a mission to remove the complexity and frustration associated with smart home systems and technologies.

Through thoughtful consideration of consumer goals, Fantem re-imagined the experience from the ground up. The result is Oomi, the easiest and most approachable smart home system available anywhere – “a system designed for the rest of us!” Now anyone can have a smart home, regardless of their comfort level with technology. Fantem has offices in Chicago and Shenzhen and strategic partners in four continents.