One of the most appealing aspects of the Internet is that it gives us the ability to view content created by people from all over the globe.

While national television, newspapers and magazines largely limit us to what is happening nearby or what is popular in the mainstream, the Internet has a plethora of different niches and sub-niches just waiting to be explored by people all over the world.

No matter how obscure your interests are, it’s almost guaranteed that in some corner of the Internet, there will be a community waiting to welcome you with open arms.

Despite how easy it has become for users to create their own content and share it with the rest of the world, there is still one glaring problem: it takes a lot of effort for the average content creator to receive even a small amount of compensation for their work.

As it stands, most of the content that we consume is controlled by a few extremely large commercial platforms. On one hand, this provides content creators with a massive potential audience which increases their likelihood of being discovered.

However, this also allows these platforms to manipulate content discovery and monetization. This makes it extremely difficult for certain creators to get noticed, and often makes it even harder for them to get compensated for their efforts.

Unfortunately, many creators aren’t being rewarded at all for their efforts.

Changing the Way Content Creators Are Rewarded For Their Work

With the rise of blockchain technology, we’re already beginning to see a significant shift in the way both creators and consumers are rewarded for interacting with content.

ASQ Protocol is one example of an upcoming content ecosystem that is leveraging the transparency of blockchain to change the way we discover and engage with quality content.

It will allow consumers to choose how they reward content creators in exchange for accessing whichever kind of content they want, on demand. It will even allow them to pay for bespoke content from the people they admire most.

Meanwhile, content creators will be given the opportunity to define the ways in which they will benefit from their positive social impact.

How Will This Model Work?

Let’s imagine a user, Jane, creates a video titled, “How to make money selling handmade jewelry” and uploads it to the platform.

Jane then chooses to give other users access to this video in exchange for 100 ASQs (the name of the ASQ utility tokens). The content will then be published on the protocol, where it will be available as an option for other users to purchase.

Should another user, Alan, find this content on the platform, he can choose to view it for the price of 100 ASQs. These ASQs will then be distributed between Jane, the community upvoters, and the platforms used to leverage publication and discovery, according to the agreement in the protocol. 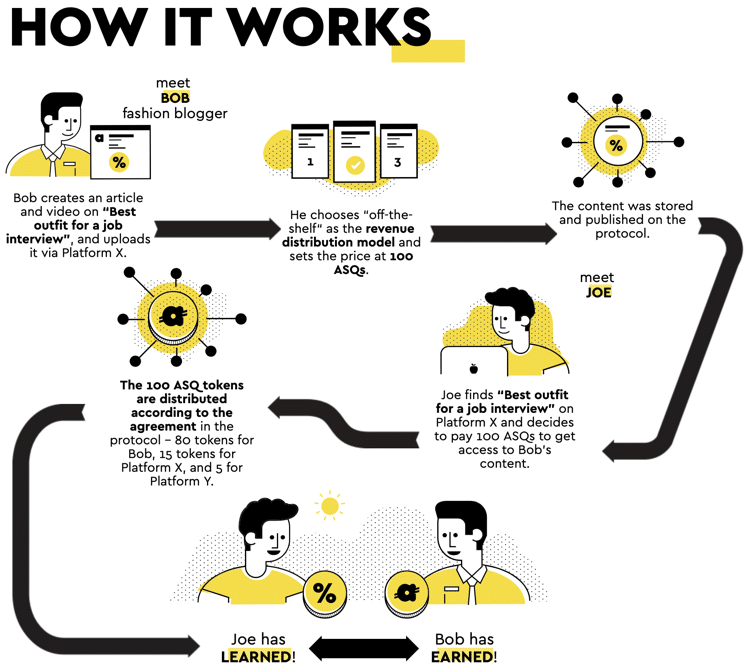 Will This Idea Really Be Successful?

ASQ Protocol might be a relatively new platform, but the team behind it certainly isn’t lacking in experience.

ASKfm, one of its partner platforms, is one of the biggest social networks in the world in the format of questions and answers. Over the past 8 years, it has amassed a total of over 215 million registered users. There are currently over 11 million active users every single month, who ask a total of over 600 million questions every month in 49 different languages.

It will use this protocol to launch the ASKfm 2.0 platform, which is designed to connect users with people around the world who can help them solve their dilemmas. As part of its launch, the platform will also offer a series of incentivized challenges including the likes of tutoring and online courses. 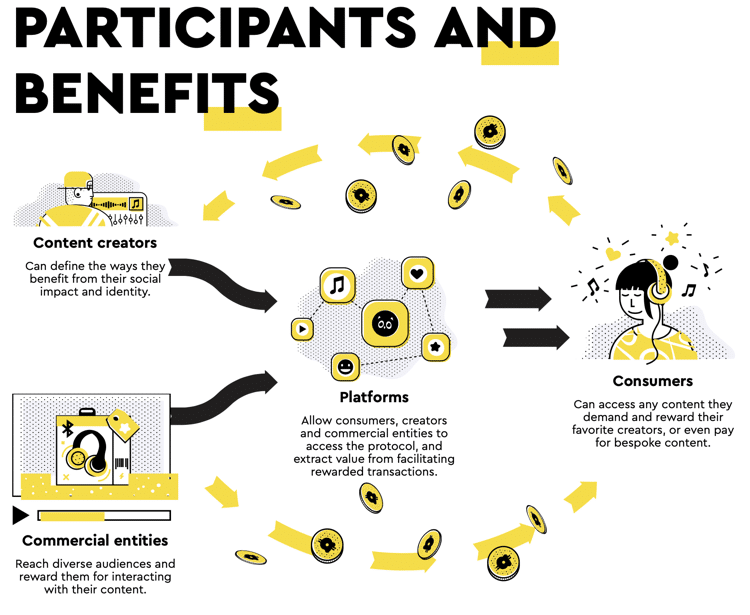 Another of ASQ’s ecosystem partners, Ning, has been on the market for 10 years and has since amassed over 45 million registered users, making it one of the largest SaaS platforms for creating social community websites.

Celebrating the Launch of ASQ Protocol…With a Twist

To celebrate their launch, ASQ Protocol is launching its own airdrop – with a twist.

Unlike most airdrops which are digital, ASQ Protocol is teaming up with the Edinburgh-based space technology firm, Skyrora, to launch a rocket that will drop $100,000 worth of ASQ tokens into Scotland.

Whoever is first to uncover the wallet will receive the prize once the ASQ tokens are released to the public.

It’s becoming increasingly clear that there is a demand for content creators, and that isn’t going away any time soon.

Hopefully, this new way of rewarding creators for their efforts will be just what it takes to motivate current creators to keep going, whilst also encouraging new creators to join in the scene and make their own mark.