Where is the Sony Smartwatch 4?

An Announcement in Barcelona?

CES 2016 attendees were bombarded with smart home tech, skinny TVs, and VR toys, but what they absolutely did not see was the brand new Sony Smartwatch 4.

Even though rumors had been swirling for months about the product’s launch at the annual Las Vegas electronics show, Sony kept quiet and did not make any new product announcements.

So, the question remains: where is the Sony Smartwatch 4?

There has been a great deal of speculation that it will finally be launched at this month’s Mobile World Congress (or MWC) event in Barcelona. Sony has called a press event for the morning of February 22, and while this could mean the announcement of a new Xperia tablet or a demo of their amazing new X930D television, many industry insiders and consumers are hoping it’s finally time for the Smartwatch 4 to make its big debut. Fact is – it didn’t happen.

With the Apple Watch leading the smartwatch pack, Pebble hot on its heels, and heavy hitters like Samsung, Motorola, Asus, and even Fossil throwing their products into the smartwatch arena, it may be a little hard to get excited about yet another product in this interesting but not quite booming category. Why all the hype over the Sony Smartwatch 4?

The Sony Smartwatch 4 will come in a variety of colours

Well, for starters, the previous iterations of the Smartwatch (a term that Sony trademarked several years ago) were popular, though they were not without their problems. Industry buzz suggests that Sony appears to have gotten it right on the fourth try. Additionally, the release of the Apple Watch last year, along with the release of Android Wear in 2014 (and its subsequent upgrades) have brought more awareness to the smartwatch market. You can also make the case that fitness tracker owners are discovering the limitations of their fun but somewhat flimsy wearables and are looking for a more powerful replacement.

Finally, the Sony Smartwatch 4 has just been built up so much. People are talking: when will it finally come out? Will it be better than the Apple Watch? As we’ve seen so many times in the past, the anticipation of a new gadget can drive its perceived value way up, and that could be part of what’s happening here.

Even though the forthcoming Smartwatch 4 should offer a number of improvements over the Smartwatch 3, the current version of Sony’s high end timepiece did have some big selling points. For starters, it was the first smartwatch to have built-in GPS. While a few other Android Wear watches have since added GPS and GPS support as notable features, the fact that Sony has had this for a while gives it a huge advantage over the competition. Notably, it’s one thing that the Apple Watch hasn’t got. 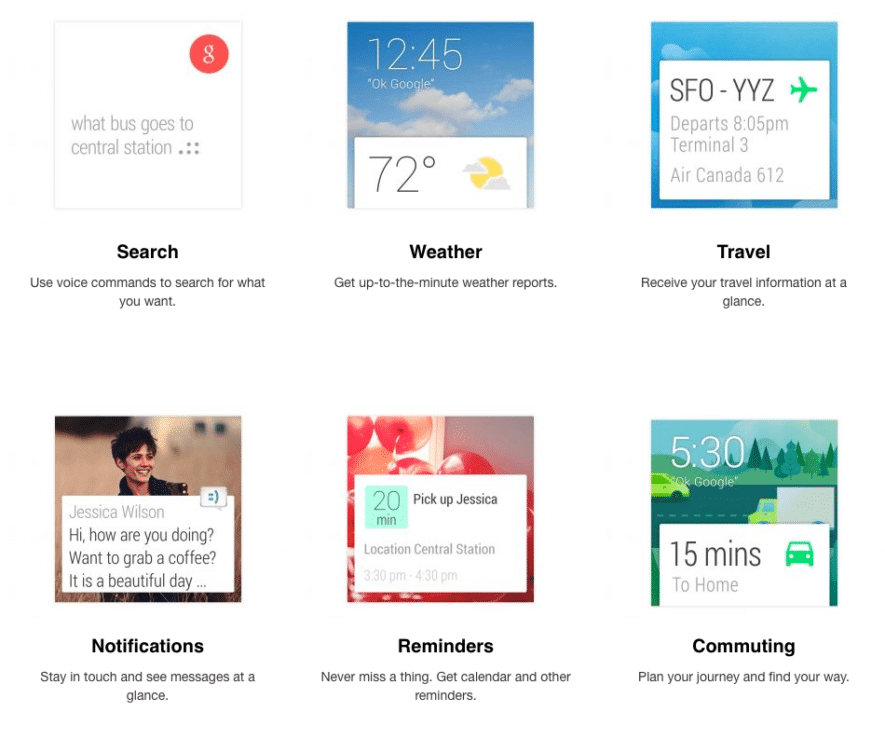 The Sony Smartwatch 3 came with a host of amazing features

The Smartwatch 3 also has NFC payment capabilities, a feature that will certainly carry over to the Smartwatch 4. And, thanks to improvements to the technology and better hardware on the merchant side of things, Smartwatch 4 wearers should actually be able to use it. Plus, with Smartwatch 4, it should be integrated with Google Wallet, making it especially easy to use.

The latest version of Android Wear also boasts support for built-in speakers, which the Smartwatch 4 should have. It’s sort of the old Dick Tracy cartoon come to life: wearers will actually be able to take and receive calls from the wrist. Music and radio playback is also an option, which could be annoying to others if you’re, say, on a train, but does present some useful possibilities. There’s no word on the audio quality of the speaker, but we have to believe that Sony wouldn’t put out a sophisticated device like the Smartphone 4 only to have the speaker sound like a tin can.

A final new function of the Smartwatch 4 that’s well worth noting is 4G LTE compatibility. While users will need a smartphone-like contract to take advantage of this feature, it essentially turns your watch into a full-fledged mobile device, allowing you to leave your smartphone at home.

We should preface this section by saying that no official photos of the Smartwatch 4 have been released yet, so much of this is based on what’s already been leaked. We can safely assume that the Smartwatch 4 builds on the minimalist design of earlier iterations; it is rumored to be slimmer and sleeker, with a slightly lower profile. It has an unassuming look — it’s not exactly the type of wrist worn wearable that coordinates with, say, a fine Italian suit, but it won’t clash with it, either. Plus, the stainless steel wrist strap that Sony released for the Smartwatch 3 definitely helps it in the looks department. 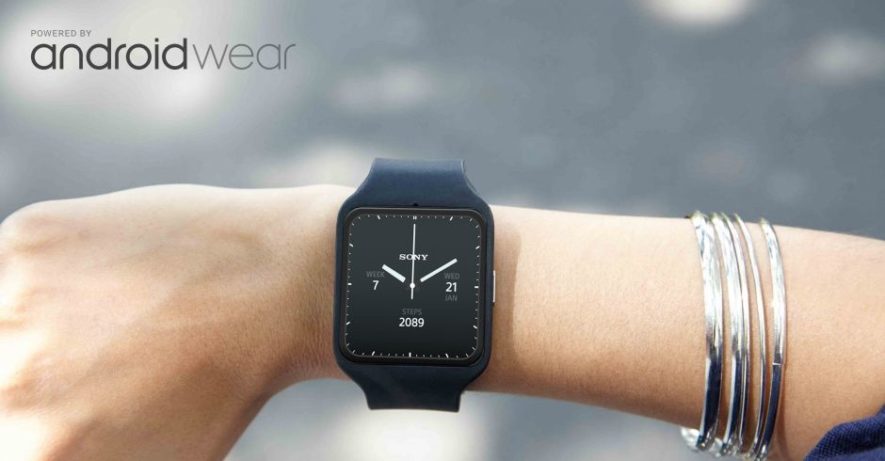 As for the screen, word is that the 4 will, in fact, feature a full color 1.6” AMOLED display. This helps Sony keep up with the Joneses, or in this case, LG, Samsung, and Apple. It will be protected by Gorilla Glass 3, the same material on most smartphones, tablets, and smartwatches. It’s strong, though as the photos of many cracked phone screens prove, it’s not totally indestructible. It is, after all, still glass.
Tech Particulars

Under the glass, the Smartwatch 4 has some pretty good numbers. It’s powered by a Snapdragon 400 1.2Ghz processor with 768 megabytes of RAM and four gigs of onboard storage. You won’t fit your whole music collection on it, but there’s certainly room for a few hundred favorites, plus all the apps and data you’ll download. There is no memory card slot, which may seem trivial, but it could help for users who do treat the Smartwatch 4 like a phone rather than a phone extension; four gigs isn’t much in the grand scheme of things. And, the Smartwatch 4 is certainly large enough to accommodate a slot.

It’s wifi and BlueTooth enabled, so you don’t have to burn your 4g LTE contract all the time. As for charging, the Smartwatch 4 still needs to be plugged into a USB cable. It’s a move that may seem a little outdated, especially given the snappy ease with which the Apple Watch charges, but it will get the job done. Just don’t lose your dongle.

Work on Your Fitness

One consumer demographic who will undoubtedly buy smartwatches consists of people who have used a basic fitness tracker for a while and are now after something with a little more oomph. Like the other smartwatches on the market, the Sony Smartwatch 4 does not disappoint in this category. In addition to working with several fitness apps (RunKeeper, Endomondo, and others), there’s an onboard optical heart rate sensor — another feature missing from the previous version. 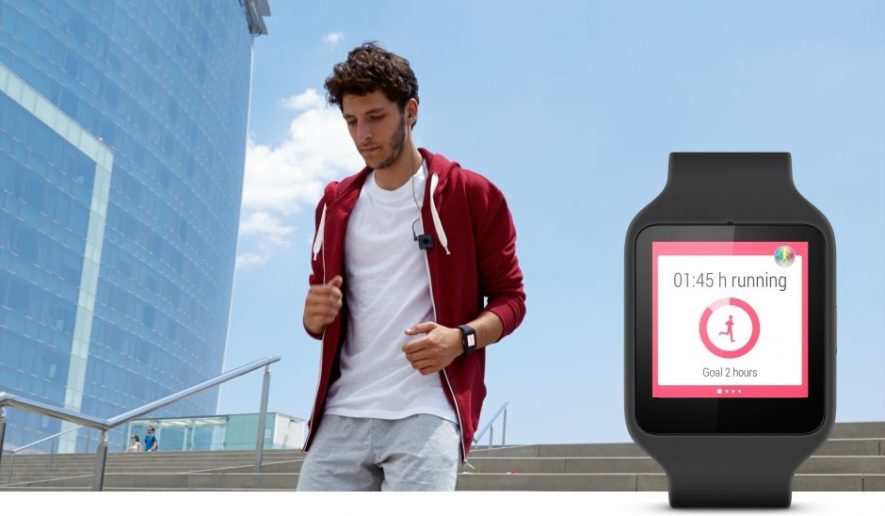 The Sony Smartwatch 4 will come with built in GPS, so you can leave your SmartPhone at home

As mentioned earlier, there’s GPS on the Smartwatch 4 as well, making it a complete, phone-free fitness and tracking solution. Pair up some BlueTooth earbuds to listen to your tunes (thanks to the aforementioned BlueTooth and onboard storage), and you’re ready to hit the road, trails, or whatever.

The Sony Smartwatch 4 sounds great, but still: where is it? With any luck, the February 22 event will give us some more details, including visuals, regarding this device and also tell us when we can get our hands on one. After speculation about it being released toward the end of 2015 fell short, current guesses are anywhere from next month to late summer. 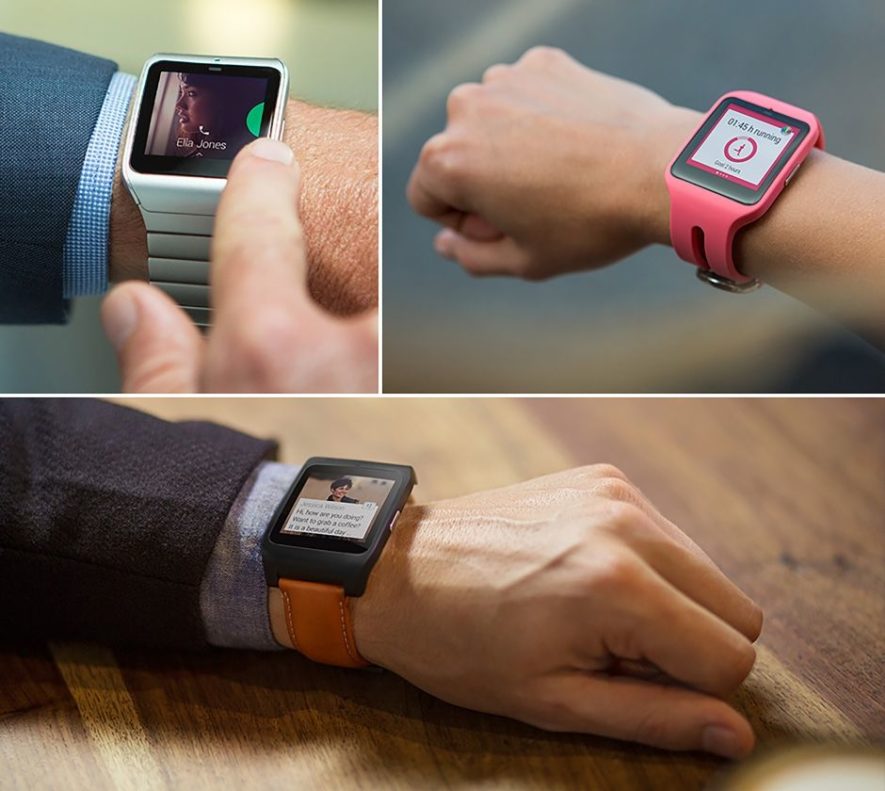 As for pricing, expect it to fall in the mid-$300 range. That might seem sort of steep at first, but remember: the lowest you’ll pay for an Apple Watch is $349, and the Sony Smartwatch 4 has GPS, a feature that often adds at least another $50 to a product. Also, given what some people pay for high-end non-smart watches (Breitling, Tag Heuer, Patek Philippe, and so on), $300-$400 is relatively harmless.

We’ll be sure to update you once we know more about the Sony Smartwatch 4. Our fingers are crossed for an official announcement this year.