Blockchain is well on its way to fundamentally disrupting the advertising space forever, with strong contenders appearing in the market this year.

Fraud in online advertising is one of the biggest reasons that the industry (not to mention publishers) is looking, already, for a better alternative to the current digital advertising model. Cost is another one. The large networks charge as much as a 30% premium on ad spend.

With a vertical already valued at $223 billion globally, the rewards are ripe for those who introduce new models – and further get it right.

According to Forbes the level of adoption of blockchain in the advertising industry is likely to rival banks. Expect to see as much as a 65% adoption rate within just three years.

But why will blockchain solve the multiple problems of the online advertising world? Blockchain itself, no matter the brand or name, functions like a giant database, recording all transactions across a peer-to-peer network connected to it. For that reason, fraudulent charges, fake products, and high expenses are about to be a thing of the past. Beyond that, block chained advertising gives consumers a better experience (allowing them to opt out entirely in some cases). However, beyond that, the advertiser is able to directly interact with and reward the consumer for brand loyalty in a way that is impossible through existing networks.

In sum, blockchain will help the world of advertising and branding find and keep customers while dropping expenses and virtually eliminating fraud.

AdSigma: Creating The Future Of Advertising On The Blockchain

AdSigma is planning on reinventing the world of mobile advertising – itself a relatively new phenomenon. However as more and more people have access to the internet, and more businesses adopt an online ad revenue strategy to reach customers and establish a brand identity, the weaknesses of this model have become quickly apparent. There is little opportunity to focus on demographics, location, turnover and bounce rates and of course the cost of the campaign in the first place.

According to industry analysts, e-commerce itself is growing at 23% a year. 53% of marketers say blog creation is their top inbound marketing priority. In a world where online advertising revenues surpassed TV ad revenue – as they did last year – accountability and transparency are just as important as cost-effectiveness if not overall expense.

By adding blockchain to the mix, all of these problems drop away. Publishers have direct contact with consumers. They can better customize their outreach. Brands can reward consumers rather than spending the bulk of their marketing budget on networks. Or lose valuable information about their customers to social networks like Facebook or Google. No more lost ad revenues to fake bots. And customers also know they are getting the “real” deal. No more fakes and frauds.

AdSigma connects advertisers directly with publishers. The platform is also easy to use, easy to scale, transparent and solves all the existing problems of the existing digital ad networks.

Advertisers sign a transaction and broadcast it to all intended recipients. When a user visits the publisher page, the AdSigma SDK connects to the system and picks up the best matching ad. In other words, a customized ad is shown to the customer. The publisher writes their claim on the blockchain system and a smart contract verifies the impression and transfers ADSi tokens to the publisher.

Tokens are used in the system to buy and sell digital ads and pay fees to both Ethereum and platform users. They will also be used to pay for future services as developed and offered by AdSigma.

The ADSi token will use the Bancor Protocol. Bancor is an ERC-20 utility token template which offers continual liquidity. The Bancor Smart Contract holds a reserve of another currency (the BNT) to determine an appropriate exchange rate between the two currencies at market prices.

The AdSigma team aims to restructure the existing business model of the advertising revenue model by removing the middlemen. They are implementing a blockchained backbone to integrate three critical components into the mix – authenticity, irreversibility, and validation tied to every transaction.

Publishers keep 100% of their ad revenue. There is no commission to pay. Google and Facebook in sharp contrast, charge over 30% commission and made over $100 billion in revenue.

And best of all, AdSigma creates a direct relationship between publisher and content consumer that allows consumers to see the most applicable material. The publisher also benefits by being able to select not only the ads they want but also the most suitable advertisers. 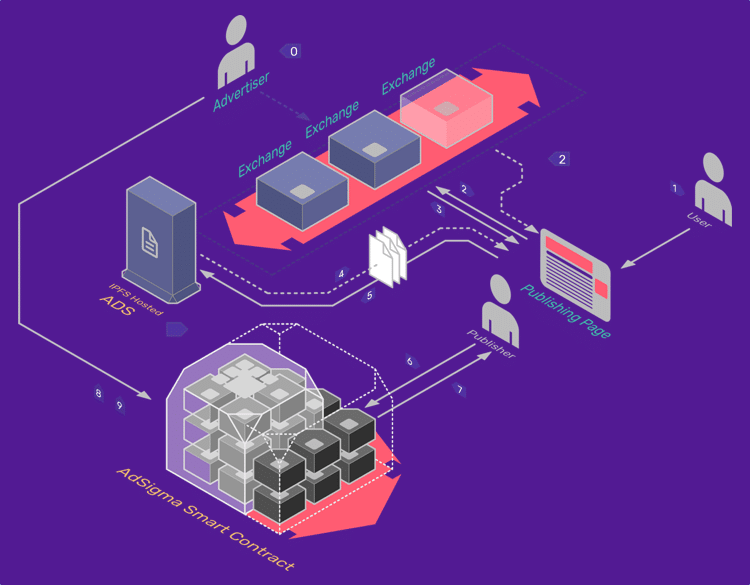 In a world where the majority of people now spend about the same time interacting with digital media than traditional TV, this can make a huge difference. It will certainly become a differential one in the near future when daily consumption of online content finally overtakes TV.

AdSigma is helmed by Suumit Shah, the founder of three successful tech companies in the web design and digital marketing industries. His last project, Grappr, is an Android app platform that gained 1.2 million users in less than a year. Lead developer Ravi Tamada has experience spanning mobile and web development, SEO and digital transformation. He also currently runs one of the top Android development blogs in the world named “Androidhive” which has a monthly viewer base of over 2 million. He has also won Gold and Silver awards for Google Glass innovation. The rest of the development team has equally strong credentials.

Here are the details of the upcoming AdSigma token sale: