In a fairly unexpected turn of events, Alcatel has announced two brand new Windows 10 devices in order to satisfy the demands of fans of Microsoft’s innovative operating system. Announced at Mobile World Congress 2017, the two devices represent Alcatel’s promising attempts at creating multiple-sized mobile offices: the IDOL 4 Pro is a true mobile powerhouse disguised as a smartphone, while the PLUS 12 is a versatile 2-in-1 tablet that facilitates work on-the-go.

Alcatel has hit it out of the park with the IDOL 4 Pro, providing one of the best Windows 10 smartphones on the market. The phone’s sleek design blends in with its gold-chrome finish in order to create a very aesthetically-pleasing device. However pretty it may be, the IDOL 4 Pro’s killer features go beyond its design: Microsoft’s innovative Windows 10 Mobile operating system may not have caught on that well, but it suits this device perfectly.

The high-end specs of the IDOL 4 Pro, coupled with the continuous connectivity between all Windows 10 devices assured by the Continuum function allow any user to pair their phone to a second Windows 10 device, a keyboard and a mouse in order to provide a true, desktop work experience while maintaining the portability of a phone.

Launching in June in Europe, the IDOL 4 Pro will retail at the starting price of 599 euros.

PLUS 12: A keyboard with a tablet attached, not the other way ’round

A bigger device for the biggest Windows 10 fans, the PLUS 12 is a truly up-to-date 2-in-1 tablet, harnessing the complete power of the desktop version of Windows 10. The tablet features a crisp 12-inch full HD display, along with a modern design that will look good anywhere. 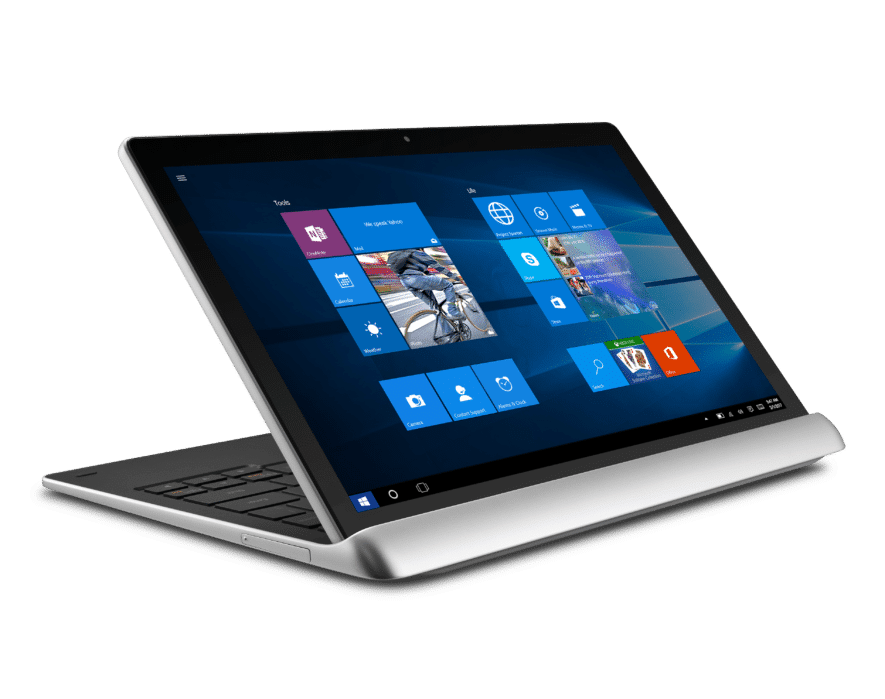 A bigger device for the biggest Windows 10 fans, the PLUS 12 is a truly up-to-date 2-in-1 tablet, harnessing the complete power of the desktop version of Windows 10.

While powerful enough for a basic, portable work machine, the PLUS 12 isn’t impressive in terms of its specifications, the 2-in-1 only featuring an Intel Celeron N3350 1.1Ghz (that can be boosted up to 2.4Ghz), 4GB of LPDDR3 RAM and 64GB of internal storage. There is also a 5MP camera included, which should be good enough for regular video conferences. The system weighs around 990 grams with the keyboard attached, and 596 grams on its own.
The impressive part is, surprisingly, the keyboard. Bringing 4G LTE connectivity to the tablet when connected, the keyboard doubles as a powerful Wi-Fi hotspot for up to 15 people when detached. This is done with the keyboard’s integrated Cortex A7 processor and 128GB of LPDDR2 RAM. Additionally, the keyboard features an additional USB 3.0 port and a SIM card slot, and is able to use Windows Hello via the integrated fingerprint scanner, and Windows Ink.

Releasing in July for the European market, the 2-in-1 tablet will retail starting at 499 euros.

The two Windows 10 devices are great products on their own, and may help bring more momentum to Microsoft’s part of the mobile market. However, with Alcatel also announcing the quirky A5 LED smartphone yesterday, we can’t help but wonder whether they have more in store for us in the coming days.