Some say that though Android Wear 2.0 cannot replace the Apple Watch or FitBit, it still is good for fitness freaks. Others hail it as Google’s best update so far. Opinions are rife but one thing that emerges is that the Android Wear 2.0 is definitely the hottest topic of discussion in tech circles as well as fans of wearables. So here is a synopsis of the new features, how they meet up with expectations, and how they compare with the iOS. We also delve into what the new software has in store for developers.

First up are the features of the new Android Wear 2.0 which include standalone native apps that run independently on the watch. A new interface named Glide allows users to send video messages. Another major highlight is the Google Assistant which brings convenience to users. All in all the user experience has been greatly enhanced in the second launching of Android Wear. It has also made life easier for developers with improved compatibility but more on that in a bit.

The new Android Wear watches have a new app launcher more suited for circular screens rather than rectangular ones. This has changed the way you interact with your watch. Pressing the slide button will now display your apps in an arc allowing you to drag your favorite ones to the top so that they are prominently displayed. At the bottom of the screen, you have an action drawer that holds a list of actions you can perform on your apps.

The new Android Wear watches have a new app launcher more suited for circular screens rather than rectangular ones.

The rotational input – a new feature of the ANDROID WEAR 2.0 – allows vertical movement within the menus. You can zoom out a particular menu too. There are several more features that are changed because of the up-down movement so that you are no longer tied down by side swipes.

Google has finally caught up with Apple by introducing Standalone apps – Apple introduced them a couple of years ago also in the second launch. Standalone is, however, the latest buzz word for smartwatches running Android. Android Wear 2.0 allows your smart watch to run applications independently so you need not lug your phone while you are wearing your watch. You will need a Wi-Fi connection of course or alternatively Bluetooth or Cellular data connection.

Google has finally caught up with Apple by introducing Standalone apps

You can now download apps and more directly to your watch instead of tying up with your phone for app support. Google has promised a load of standalone apps for the new software in their play store which brings us to the next big feature.

Android Wear 2.0 brings you its own play store so you can now download apps directly to your watch

Since your watch is no longer tethered to your phone, Android Wear 2.0 brings you its own play store so you can now download apps directly to your watch. Doing away with the need to store apps on your phone saves considerable space on your phone. It also gives you the freedom to choose which apps you want on your phone and which ones you would like to carry along on your watch.

Playing catch-up – in the words of Paul Lamkin – Android Wear 2.0 offers its users a better interface with customizable watch faces. The new widgets have a new name – complications – named after those from the Apple Watch. You can now access data from the likes of Google Fit and what’s more, you can even interact using APIs. You can customize your watch face or choose from a host of existing ones complete with complications and time window. Personalization means you can have different watch faces for different times of the day or for different tasks such as jogging, work, and leisure. You have to select them manually, though – watch face selection is not automated nor can you set timers for selection.

Messaging just became a whole lot easier with Google Assistant ready to take orders and fulfill them. You can now ask to be guided to the nearest “in” place to eat or the best place to work out. And you can pay via your watch too! The assistant will voice-guide you provided you have the hardware to support it. Some custom keyboards have been made compatible with ANDROID WEAR 2 making it easier to send and receive messages. You may have to scrunch your eyes though because of the size. But once again Google Assistant comes to your aid taking dictation for your messages.

This is perhaps the best feature – it’s definitely the most talked about! Better streaming and an automated activity detector make your work out that much more pleasurable and easier to log. Google Fit has seen some much-awaited improvements showing you your fitness information right there on your watch! What’s more with new and improved compatibility features, you can now port it to almost any platform. Your watch can count for you whether you are doing squats, sit-ups or pushups – these are the only three currently available, though.

And some users are demanding accuracy – don’t scratch or swat a fly whilst working out or you may end up with a bigger count! Also on demand is coaching – you’ve done 10 today is that where you stop or do you push for more? Fit workout – a preinstalled app that ships with ANDROID WEAR 2.0 tracks your runs whether on the road or on the treadmill – but some find accuracy lacking here too. All in all, fitness has improved but still has a way to go! 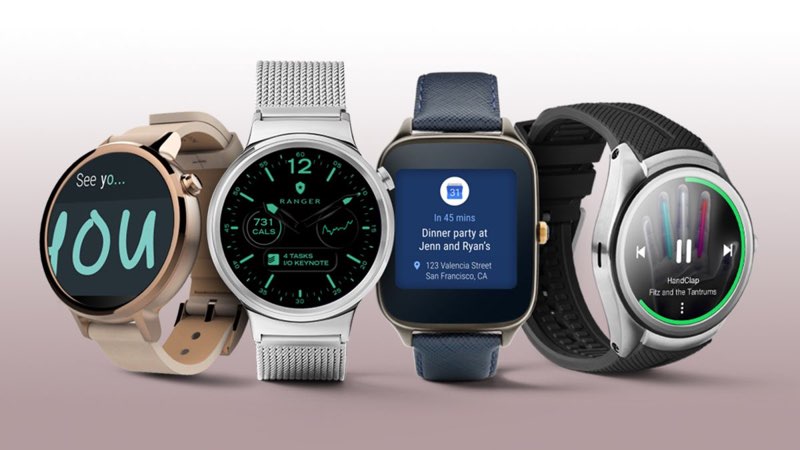 Notifications are slightly improved with light text on a dark background instead of the reverse saving power – or so says Google. The cards are now stacked with the top one showing when you raise your arm to activate your watch. You can then swipe through them with a counter below showing you how many remain to be seen.

Surprise! Surprise! Google has caught some watch makers like LG and MOTO unawares – they did not put much faith into the next Google update. Others like Zen Watch and Fossil have come out with newer models some of which are already available. Those in the “surprise” group have recovered quickly and coming up with new products. As we mentioned earlier, users are demanding more from the Google Fit app. We feel the improvements in notifications are significant enough, given that there isn’t that much you can do on the small watchface.

Any new technology has two main perspectives, that of the user and that of the developer. Here is a look at both.

That’s you! We’ve already discussed what’s new for you in the foregoing section. Better notifications, enhanced apps having their own widgets, information about nearby eateries & other businesses, and better fitness tracking give users a better experience all around. Of course, if you’re comparing it with the Apple Watch, Apple has a substantial head start. But Google is not far behind!

From a developer’s perspective, iOS support is perhaps the most important feature. The App Store now has a new version of the companion app which supports Android Wear 2.0. Supported features include RemoteIntent and OAuth. RemoteIntent hands off APIs have been added into DP4 making it easier for developers to test their apps on all platforms. You can pair your ANDROID WEAR 2 with a device running iOS and enjoy a hands-off experience (off the phone that is). We do hear though that the iOS version must be iOS 10 or higher and this specifically excludes 10.0.1. The near field communication has been enhanced as has the Host Card Emulation. The Wear Support Library has been updated too.

Fitness wise even if you have collected your data through your Google Watch – which is now automated for recognition of activity – you can still map it to your favorite platform – like Strava for example – making life easier for developers. On the other hand, automated tracking makes programming that much more complex. Look out developers – don’t’ count an itch into a rep! But then you probably just have to tweak your algorithm a bit if you are already writing for iOS – or for that matter Android.

Several third party keyboard apps are also now compatible with Android Wear making messaging that much simpler for the end user. Also, you may have to put the message together alphabet by alphabet by recognizing the shapes the user writes – if he chooses to do so that is.

Notifications are now stacked with a progress bar at the bottom to let the user know how many more are still in the stack. Users will also expect to be reminded about upcoming appointments, workouts, and schedules so be prepared to juggle the storage.

To sum up, all in all, the new Android Wear 2.0 has received a warm welcome. There were many who had low expectations from Google and did not expect the giant to come up with an update – at least not so soon. Developers will have their hands full understanding the intricacies of the new OS while users have fun trying out the new features – particularly in the area of fitness. What remains to be seen is how well these features work. But Google being Google, we are expecting a good performance and hopefully more updates. If you are debating between Apple and Android read on.

If you are trying to choose between the two, Apple has a head start as far as Smart Watches go. Another thing in Apple’s favor is that the company manufactures its own watches and makes them compatible with other Apple devices like phones and TV. Look out for our write up on the best smart watches for both iOS and Android. Meanwhile, as we already mentioned, Apple has a strong foothold in the smart watch market.

However Android is catching up fast and you will soon see Android watches that can act as TV remotes. This aspect is important because Apple Watches already have this and more iOS-like features. Apple, of course, will always be remembered as the pioneer in Smart Watches but Google comes a close second. And who knows there may be others down the line? Perhaps soon the lines of distinction will blur enough to make all devices compatible with one another?

For those who consider Google nothing more than a “copycat”, we at Chipin say Google is a true pioneer in technology. So kudos to Google for the latest release of Android Wear 2.0 and we are looking forward to many more. If you already own an Android device scroll down for a list of Android Wear 2.0 compatible watches.

The list is not comprehensive nor do we have a clear idea about the release date for many of these devices. But the buzz word is that most of these devices are AW2 compatible so BOLO (Be On the Look Out).

The Android Wear 2.0 is now officially out. Expectations were high with Forbes proclaiming 2016 as a “bumper year for smart watches ….and 2017 even bigger”. Some of the greatest expectations from the then expected Android Wear 2.0 included standalone – phone free – apps, better texting, improved fitness support, and better notifications. Here is a first review at which of these expectations were met and how they compare with Apple Watch.