The trading industry is filled with assets; from gold to stocks, to real estate and other commodities like oil.

Currently, a lot of these assets face the same bottleneck in that they are difficult to physically transfer or divide. Traders instead trade paper or agreements which represent a portion of the asset when exchanges are done on the marketplace.

With paperwork, things become complex and legal agreements start to get even more complicated the more valuable the trade is. You also have to factor in the fact that paper agreements are difficult to transfer and it cannot be tracked down easily like a digital item.

While some exchanges have forgone the paper-based system by using electronic transactions and standardized agreements, the operational costs of these systems are expensive and they also rely on a third-party to function.

This bottleneck can also be seen in other assets like long-term investments, for example.

With current market practices, the investment would most likely not go through because of the high costs of investment in the project.

First of all, the firm’s investments would be illiquid for a significant period of time while the real estate project is under construction. Next, the real estate market in Hong Kong is unpredictable which poses a huge risk to investors.

These statements explain problems that are actually happening right now in the assets trading market.

What can be done to alleviate this issue?

BANKEX aims to solve this issue by building an innovative model of combining Bank-as-a-Service (BaaS) principles with assets tokenization, IoT, as well as AI technologies.

The main direction of BANKEX is the development of a BaaS (Bank-as-a-Service), which allows for the tokenization of assets (turning assets into tokens) and the trading of said tokens.

The model allows for the introduction of new financial products and services that integrates easily with current financial services technologies.

With the BaaS model, you can technically build a bank or a financial service in as quickly as day; the same business can also be constantly changed and improved as it is made up of microservices and open-source software rather than a model that is large and needs to be overhauled completely.

This can be achieved with the use of APIs that enables asset owners to access a global capital, both in cryptocurrencies as well as fiat that can come from parties like private investors, funds, and even banks. The tokenization model, on the other hand, provides an effective solution to a serious problem.

Businesses are starting to get aware of the benefits of a tokenized model, but there has to be an easy and effective way for these businesses to adopt the model. This will help to move forward industries to a more tech-based one which is again, much more efficient (and cheaper!).

BANKEX solves this by introducing the Proof-of-Asset protocol which allows users to tokenize revenue generated by assets.

One such example is demonstrated by one of BANKEX’s use cases in where tokenization allows for greater flexibility in financing between buyers and banks for to-be-built apartments in the secondary market for new buildings.

Here’s an example of how the Proof-of-Asset protocol works:

Let’s say you want to sell a used car. Doing it the traditional way will take you a very long time; after the paperwork, you’ll need to go for a test drive, and then you have to wait for god knows how long for your buyer to make a decision.

His decision is not going to always be a yes either – what is stopping him from refusing to buy your car?

Even if you have a used car that is in good condition, it is nearly impossible for you to make a profit on it. The value is going to be less than what you paid for when you got the car.

This is where the Proof-of-Asset protocol comes in. You can tokenize your car to access BANKEX’s platform. This will allow you to access capitals and markets all around the world in just a click.

That is a sample use case of the BANKEX platform.

With tokens, you avoid the hassles of going through paperwork to get loans or stuff done as well as the expensive fees attached to it because you’re now trading your assets in terms of tokens!

All of this is tied together with smart contracts.

You don’t have to go to a court or the police to get things done, everything is done automatically and fairly for all parties.

What are the benefits of BANKEX?

Real world assets like oil and gold have one big issue: they are extremely illiquid.

When you tokenize these assets, trading suddenly becomes so much easier because you can now split them into parts.

With tokens, individuals who previously didn’t have access to trading such assets due to procedures that cost too much or extremely complicated regulations can now trade easily and quickly.

Not only does tokenization make assets highly liquid, they also increase its value thanks to the increase in liquidity.

Trading tokens also include a strong layer of security around it as traders do not have to worry about the physical security of their assets because everything is stored digitally.

This means no one can steal, take away, or scam you out of your assets.

The BANKEX project is also led a by an extremely strong and experienced team of developers and other professionals.

As a testament to the team’s technical abilities, the BANKEX team recently developed an ingenious solution to a major problem in the Ethereum platform.

The Ethereum network can get congested during peak periods which makes transactions slow to process, and more seriously, make transactions more expensive especially during a token sale.

To counter this problem, Ethereum developers came up with a solution termed Plasma, which reduces the stress put on the Ethereum network hence making transactions significantly cheaper as well as speeding up transactions on the blockchain.

During ETHWaterloo (an Ethereum event that happened on the 13th-15th of October 2017), the BANKEX team came up with a solution like Plasma to solve the network’s transaction issue in breakneck time – in just under 36 hours.

This astonishing achievement ranks the BANKEX team among one of the world’s best blockchain development teams, a feat that not many startups can boast of.

Another good thing about BANKEX is the seriousness of the team in tackling legal issues and regulations. 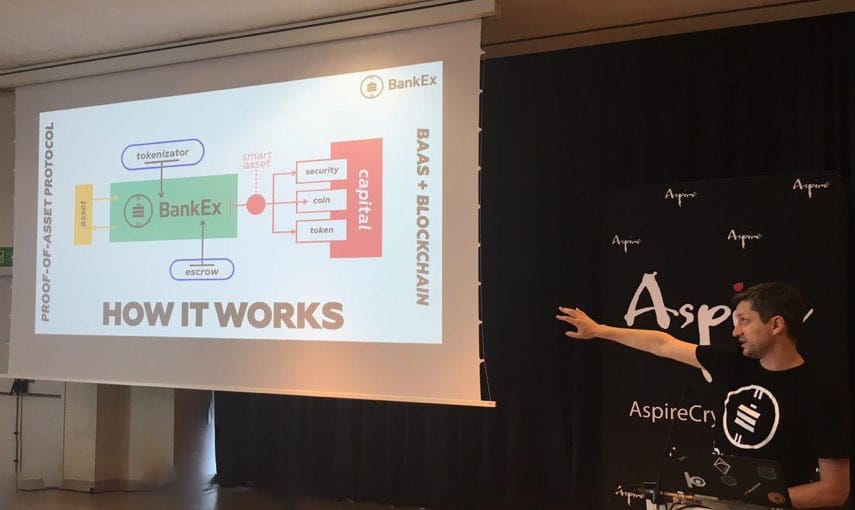 Unlike other token sales, BANKEX has been legally approved which means US investors can participate in the BANKEX token sale after accreditation as well as KYC and AI procedures.

The BANKEX team will continue to develop their legalities to ensure that anyone can invest and use the platform, regardless of their country of residence.

The platform will also be secured by a cyber defense partnership with Group-IB, one of the world’s most reliable anti-cyber fraud firms.

The partnership will help protect BANKEX at every stage of the token sale, minimizing outside interruptions such as preventing attacks from hackers as well as minimizing risks as much as possible in the platform.

How do I participate in the BANKEX token sale?

The exchange rate of the BANKEX token sale is set at 1 ETH = 500 BKX tokens.

You can participate in the public presale right now which has a minimum investment amount of 100 ETH.

The presale will reward investors with a bonus rate of 625 BKX per ETH.

The first stage of the token sale will commence on November 28th.

To participate in the token sale or learn more about the project, click here to head over to BANKEX’s official homepage