With global political unrest being sparked by recent events such as the possibility of Russian interference in the last American election, people are questioning the political process now more than ever.

In developing nations, there is the constant issue of blatant corruption and despite technological advances, voting is still an annoying and cumbersome process – voters are still forced to line up to mark pieces of paper.

If public trust in voting erodes, voter apathy will rise. This may be due to individuals feeling that the process of voting is too arduous or they can’t see their own vote making a significant difference.

Horizon State hopes to revolutionize the way people vote and make decisions by utilizing the blockchain to create a secure digital ballot. They aim to use the blockchain to add security and transparency to the voting process, with applications ranging from governments to public and private organizations.

Horizon State co-founder, Jamie Skella, explains: “We need better-shared decision-making tools and processes in almost every facet of our community lives. We need them to be transparent and trusted, allowing deliberation and inclusion, removing barriers rather than stacking them up. We need better mechanisms to become informed, to deliberate, and to collectively make decisions in regards to shared resources.”

Technical obstacles have previously prevented society from achieving a better voting system. But with the blockchain, that has changed. For example, there is no longer any technical reason why voters should need to vote at a polling station or receive a postal vote, and no financial reason to continue spending the time or money to upkeep the traditional processes.

The blockchain lends itself perfectly to casting votes. It is an immutable public ledger, trustless, and inspectable by all. A vote cast to the blockchain is unforgeable and the voting results recorded on it are indisputable.

By using a distributed ledger, Horizon State will deliver a digital ballot box that can’t be hacked, results can never be altered, and voter identities are protected. These counts can happen in perpetuity, as results are permanently retained on the blockchain and can never be changed. 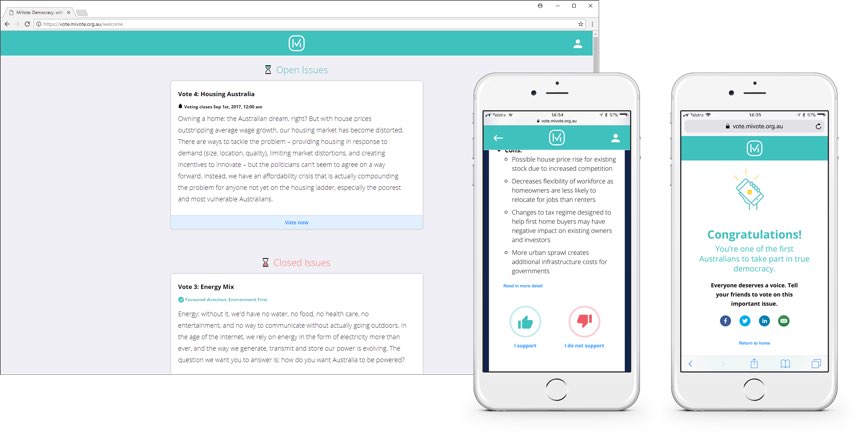 Horizon State will then allow voters to verify their own vote while maintaining their anonymity. The end result is a system that is quicker, more convenient, and much cheaper than current centralized voting processes. For the first time in history, voters have a perfectly secure record of vote results, thanks to distributed ledger technology.

As a real-world example, Australia conducted a non-compulsory postal vote on September 12, 2017, costing taxpayers over AUD $120 million dollars. Considering the 15.7 million eligible and active voters in Australia, this equated to a cost of AUD $7.70 per vote. Meanwhile, the cost of a federal election has risen to AUD $227 million, or $15 per vote. Horizon State’s blockchain voting solution fares significantly better when compared to traditional voting systems. Their cost per vote – excluding the cost of initial platform development – remains less than AUD $0.50.

Utilising Horizon State’s blockchain voting platform, the time it takes to deliver and ‘count’ results will be drastically reduced from months to days, or even hours.

Direct competitors to Horizon State include Boule and Votes Platform, but Horizon State believes their secret weapon lies in the fact that they work with customers on a case-by-case basis to ensure their existing policies and processes are well accommodated.

Horizon State has partnered with SAP Next-Gen to present a token-based blockchain voting and decision-making platform. Other traction includes a pilot planned with a global NGO, partnership discussions with Bancor, Hollywood studios, and United Nations IGOs.

The Horizon State platform operates through the use of Decision Tokens (HST). These are used for running the decision and voting processes by providing the ‘gas’ for voting and other services within the ecosystem.