After a successful beta launch, Blockport plans to fund expansion of its social trading crypto platform.

Social crypto trading platform Blockport has announced that it plans to launch a multi-stage security token offering (STO) starting in March 2019. The company’s goal for the token offering is to raise at least 15 million EUR for further company expansion. Blockport intends to use any funds raised in the STO for establishing operations in the U.S. and other countries, expanding its social brand in the European retail market and acquiring licensing for fiat-to-crypto banking services following massive user growth in 2018.

To be held on the Tokeny security token issuance platform, the Blockport STO will include separate offerings to (i) accredited investors in the United States and (ii) to participants in Europe and other jurisdictions.

Blockport has big goals for expansion in 2019 following paying-user conversion rates exceeding that of Coinbase’s by four to five times in the previous year. The success Blockport experienced with its beta launch made the social trading platform a leading crypto exchange in Europe. The platform also generated significant interest in the U.S. during 2018, with 40 percent of Blockport’s web traffic coming from the United States. In order to enter the U.S. market, however, Blockport will require significant resources for securing the proper licensing.

The team chose an STO to fund their expansion plans because of their strong belief in cryptocurrency as the foundation of innovation in global finance. In fact, this STO isn’t Blockport’s first token offering. The company held a successful utility token sale in 2018 to help fund development for the crypto exchange. That token — Blockport Token (BPT) — powers the platform’s social trading features. The upcoming STO seeks to deliver additional value to investors in the form of an indirect participating interest in Blockport and will help Blockport pursue its goals for growth, all while maintaining the company’s values and support for the crypto community.

The first round of the offering is scheduled for March 2019, with a goal of raising 5 million EUR in the European Economic Area and the United States. Blockport intends to leverage an exemption from the requirement of publishing an approved prospectus for the first round.

Shortly after the first round concludes, a second round of fundraising is planned. Blockport intends to engage in concurrent offerings in the United States under Rule 506(c) under Regulation D under the United States Securities Act of 1933 (Securities Act) to accredited investors and a separate offering under Regulation S under the Securities Act to investors in Europe and other countries. Blockport aims to bring the total amount raised to 15 million EUR by the end of the second round in June. A third round of the STO is planned, but the timing and structure will depend on Blockport’s growth in 2019 as well as market conditions. In total, with all three rounds combined, the crypto exchange aims to raise 30 million EUR.

Participants in the STO will receive Blockport Securities (BPS). Each security token represents a ‘depositary receipt’ or ‘certificate’ for a corresponding share and, thereby, an (indirect) ownership stake in Blockport, entitling holders to the dividends paid out on the underlying share if and when they are declared. These tokens will not, however, give holders voting rights, as these vest with the intermediary issuing the BPS’s who also acts as legal owner and administrator of the underlying shares in Blockport. 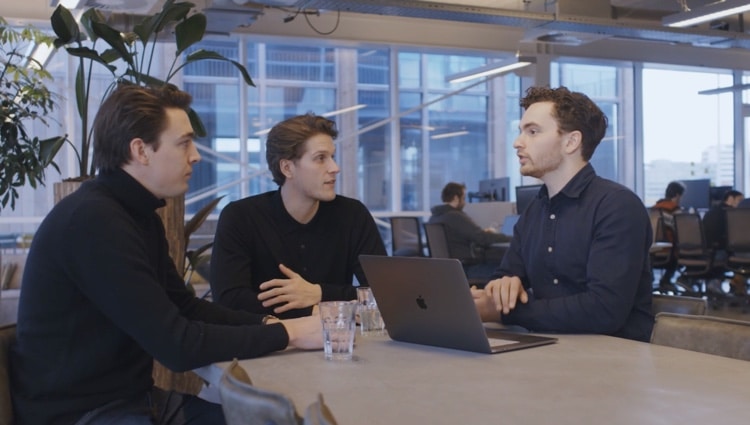 Chipin got in touch with the Sebastiaan Lichter, Founder & Chief Product of Blockport and asked him a couple of questions regarding their upcoming ICO.

Will utility token holders get any benefit from the security token?

Blockport intends to allocate a certain amount of the STO proceeds to buy BPT. The exact amount and timing of the BPT buy program will be disclosed at a later stage. Utility token holders will indirectly benefit from the success of the STO. Blockport raises funds through the STO to further spur development of the platform where BPT is an integral part of. This means that the success of the STO will expand our platform and brand to additional countries, resulting in more usage of the platform and the token BPT.

What will be the model to value utility tokens vs security tokens and how can they generate liquidity for both?

Utility tokens’ value is derived in terms of users and usage (network effects) and will drive the platform’s features, whilst security tokens are directly linked to our company’s financial performance (revenues & profits).
So there are two different models to value each and both don’t necessarily have to go at the same pace. For instance, as an example. The company could subsidize sign-ups and make a lot of costs to do so, resulting in a lot of new users for the platform and increase usage for the utility token but not in actual profits. The other way around the same can occur. This means that both can in theory independently increase or decrease in its value.

In order to receive updates regarding the STO, please register at the official Blockport website.

This press release does not contain or constitute an offer of, or the solicitation of an offer to buy or subscribe for, the securities referred to herein to any person in any jurisdiction, including the United States or in any jurisdiction to whom or in which such offer or solicitation is unlawful. The securities discussed herein have not been and will not be registered under the Securities Act and may not be offered or sold in the United States absent an exemption from registration under the Securities Act.

Blockport is an Amsterdam-based cryptocurrency trading platform that combines social sharing with trading to provide a secure, efficient and enjoyable trading experience to its users. As part of its social trading system, users can connect with each other to discuss trading strategies and copy each other’s portfolios. This social trading model makes investing more enjoyable and allows beginners to quickly learn from veterans, hopefully resulting in early success. Since the launch of its user-friendly trading platform in August 2018, Blockport has seen paid user conversion four to five times higher than Coinbase.