The idea of lending without the middle-man has caught fire in cryptocurrency finance. The idea of being able to connect with lenders beyond traditional sources will be the next big “thing” in global business development.

This ability is especially important for smaller businesses – many of who do not qualify for traditional loans from established lenders.

Crowd Genie is one of the earlier Asian entrants into this space. It is a platform connecting potential lenders with borrowers. As such it is well-poised to enter a market which is also just exploding and worth well over a billion dollars in Singapore alone.

They attract both lenders and borrowers by offering better than established market terms on both sides. Those who are seeking loans are offered better terms and see requests processed faster (in as little as 5 days). And those who step up to be lenders receive better returns than leaving their funds with banks.

Crowd Genie’s goal is to create the first Asian-wide Asset Exchange on Blockchain.

Based in Singapore, the company was founded in January 2016. It received regulatory approval in March of this year when it was granted a securities license by the Monetary Authority of Singapore.

The company boasts a 22% ROI to date with a zero default rate and a $5,000,000 loan pipeline. They are now looking to expand services. To that end, they are launching a token sale that will be complete in early 2018.

What is Unique About Crowd Genie?

Crowd Genie offers lending services essentially to small businesses who cannot otherwise get credit or where banks do not lend the full amount they need expand their successful business.

In addition, it attracts lenders via what may be the first provision-funds insurance offered by a crowdfunding platform in Singapore. Called GenieShield, it is a fund that can advance money to lenders in the event of a delay in payments or default of the borrower. Funds are kept in a separate account that is managed by their escrow agent. Defaults are defined as payments made later than 120 days past due date. A delayed payment must be at least 21 days past due.

While this does not have the same protections as lenders insurance from a bank, the offering at least is a level of protection that sets this apart from P2P lenders who do not offer such services.

GenieShield is not the only form of protection offered by Crowd Genie. The company performs rigorous credit checks, including 40+ variable checks and using a sophisticated AI-powered scoring engine. They also perform multiple identity checks in a process known as KYC (Know Your Customer) on both borrowers and lenders. This ensures that those who borrow are who they say they are.

Crowd Genie is not a loan guarantor, rather a facilitator.

The founders hope to create both a microloan and a lending platform where assets can be divided efficiently for the purposes of funding. This is sometimes called fractionalized lending. In other words, the service will be able to efficiently split larger safer projects into smaller pieces, allowing even smaller lenders to participate in a loan.

What Is The Purpose of The ICO?

Crowd Genie has launched an ICO to raise money for additional tech capability. Their desire is to become the first pan-Asian asset exchange platform. And while they have been in operation at this point for 18 months, they believe that integration of blockchain into their capabilities will allow them to not only serve clients faster but expand services quicker. 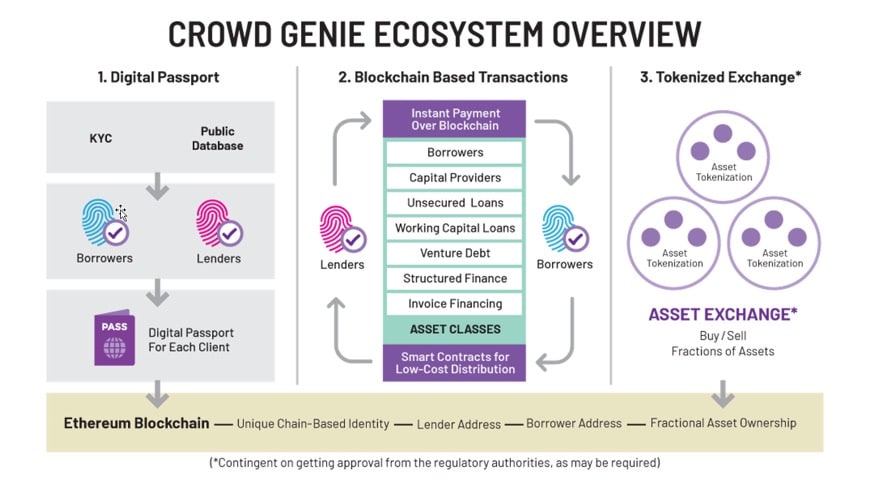 To do that, they are planning a three-part plan, financed by the ICO.

Step 1 is to create an international, albeit Asian “digital passport.” This means that the firm will engage in KYC processes for every customer that is compliant with all Asian laws.

Step 2 will be to integrate this identification ability into the current P2P environment. This will, in turn, allow the company to grow their footprint and franchise while keeping lending fees and margins competitive. They will also expand the asset classes they will incorporate into the scheme – meaning that they will allow more assets to be tokenized and commoditized. They intend to build this out on the Ethereum blockchain.

Step 3: They want to create a token-enabled platform to allow international asset trading throughout Asia. These tokens would be used for investment in infrastructure, stocks, cryptocurrency in both Asia and outside the region.

The coinage of the service will be called CGcoins. These, in turn, are invested into Crowd-Genie’s high returning alternative loans. Debts will be denominated in this currency. Borrowers are also rewarded for timely repayments with them.

80% of the profits of the company will also be used to buy back CGCoins at market price.
Transactions on the Crowd Genie platform will be conducted in CGCoins. These, in turn, are based on Ethereum ERC-20 coins.

The token sale is ongoing from now until February 28 with a goal of raising 100,000 ETH. Early investors get more of a bonus. Crowd Genie is offering graduated bonuses on investments from now until the end of the ICO with a minimum purchase of .1 ETH and no maximum purchase.