A wave of cryptocurrency platforms are either transitioning to proof-of-stake (i.e., Ethereum) or are launching from scratch in the hopes of gathering the attention of users, developers, and other blockchains — a foray into interoperability.

Platforms like Cosmos recently launched to much fanfare, while the mainnets of Polkadot and Cardano loom on the horizon.

While Polkadot, Cosmos, and Cardano are proof-of-stake networks, they are a slightly different iteration of another set of projects seeking to advance on-chain scalability with a novel approach — sharding.

Elrond is one of those projects and has been building momentum since its cross-shard transaction prototype that they open-sourced back in November 2018. Similar to another public blockchain network exploring a bootstrapped sharding blockchain, Zilliqa, Elrond differentiates itself by pushing the limits of sharding technology with state sharding and a wholesale transition away from PoW and into its native Secure PoS (SPoS) consensus.

With a focus on user-friendliness and linearly scalable performance, Elrond presents a unique take in an increasingly crowded field of PoS blockchains tackling scalability and interoperability.

What initially began as a research project, fueled by a passion to solve the problem of scalability and interoperability that plagues public blockchains, quickly evolved into a full-fledged endeavor to build the next-generation blockchain that would scale to mass adoption. 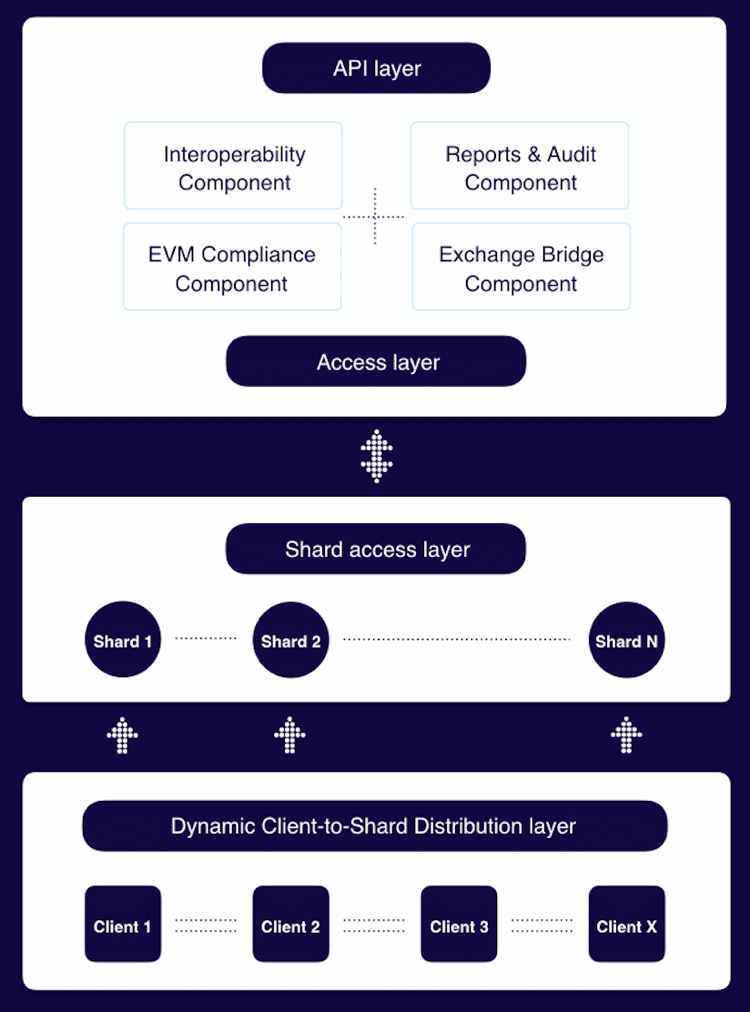 With a talented team of computer scientists, Elrond is pushing the limits of research and practical development of a highly sophisticated and novel concept — blockchain sharding.

A brief history of sharding will reveal that it is no brand-new technology that was born to scale blockchains. Instead, sharding — otherwise known as horizontal database partitioning — is a method for splitting a database into individual components, called shards, that are each held on a different server instance.

Applied to a blockchain, sharding comes in several distinct forms that allow the blockchain to process transactions within each shard in parallel to another shard — vastly increasing performance. Explorations into sharding for blockchains have been ongoing for several years, and separating the forms of sharding is an important consideration.

For example, network sharding is the division of nodes into shards, which process transactions in parallel. Transaction sharding is the efficient allocation of specific sets of transactions to node shards that further increases performance. And finally, state sharding, the most complex of all, involves partitioning the state of the blockchain network across multiple shards, where each shard does not store the entire state — instead functioning as an independent blockchain in communication with the other shards.

This ‘network of blockchains’ that results from state sharding is a crucial component of the ‘Adaptive State Sharding’ that Elrond has created. A combination of network, transaction, and state sharding, adaptive state sharding enables Elrond to linearly scale — even surpassing specific centralized counterparts in performance.

“Elrond is a sharded, layer one protocol designed to add 1000x improvement in performance to current iterations of blockchains by addressing throughput and speed of execution,” says Elrond Co-Founder and CEO, Beniamin Mincu.

The idea is to provide the high-performance infrastructure necessary to support mass adoption of applications on a public blockchain without sacrificing the equilibrium between decentralization, security, and performance. Ultimately, Elrond could not achieve the optimal version of Adaptive State Sharding without its complement — Secure Proof-of-Stake (SPoS). 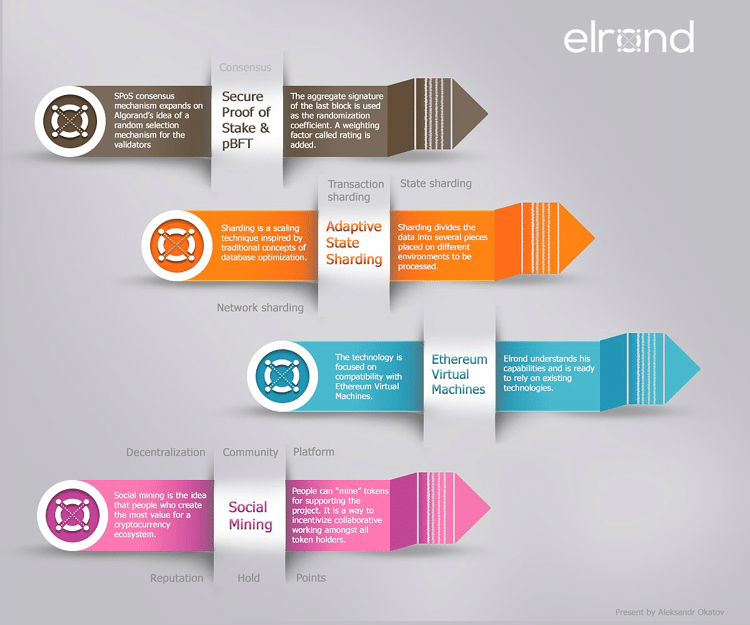 Compared to other proof-of-stake algorithms, SPoS is designed explicitly with cross-shard communication, random validator selection, and pruning of the blockchain state in mind. Elrond’s SPoS extends the concept of Algorand’s random selection method by reducing network latency and improving the multi-signature scheme. As such, Elrond produces a robust and secure PoS algorithm for a complicated inter-shard consensus design.

The results of Elrond’s design are compelling so far. According to preliminary results of the GO implementation of their protocol that they adapted from their prototype, Elrond peaked at 3750 transactions per second (TPS) per shard. For context, Bitcoin processes roughly 4 – 6 TPS on the entire network, not just a single shard, and Visa can process upwards of 20k TPS at peak capacity.

A Network of Proof-of-Stake Blockchains

Elrond’s results so far are impressive, but even they will admit there is no ‘one protocol to rule them all.’ The broader notion within the industry is that, eventually, a network of interoperable blockchains will communicate and transfer data/value with each other in a mutually beneficial dynamic.

An important caveat of interoperability, however, is that many blockchains bootstrapping as PoS are only compatible with ‘fast-finality’ consensus blockchains — aka other PoS blockchains. For example, Cosmos requires a custom bridge to Ethereum in its current proof-of-work format, called Ethermint. Elrond will work in a similar format where bridges between disparate chains require specialized adapters if they are not compatible with Ethereum’s EVM — which Elrond will connect to with a bridge.

The larger takeaway though is that an ecosystem of PoS blockchains with an emphasis on scalability and communicating with each other is on the cusp of materializing. The market will eventually determine which blockchains prevail for specific use cases, and Elrond is positioning their platform as the ‘user-friendly blockchain for deploying programmable money and unstoppable applications.’

A high-performance infrastructure blockchain congruent with the exacting demands of modern applications should prove a significant draw for many developers, and eventually, more users. Public blockchains have come a long way since Bitcoin’s inception, but they still struggle to attract mainstream users. Perhaps an ecosystem of scalable, interoperable blockchains can shift that narrative.