Coalichain, the first decentralized political platform that connects citizens to their leaders and governments, is announcing today that Frederic Lefebvre, the founder of French Political Party, Agir, and seven other Israeli politicians, have joined as committed users of the platform. Coalichain offers a transparent and decentralized alternative to the current democratic system through Web 3.0 features and blockchain technology. Coalichain’s app is dedicated to hosting communication between citizens and leaders with real-time chats, news feeds, e-voting with smart-contracts, and other features.

Coalichain has gained commitment of Israeli leaders such as former Interior Minister Eli Yishay, Eli Ben-Dan, Shulamit Mualem-Refaeli, Bezalel Yoel Smotrich and Moti Yogev of the Jewish House, Moshe Zalman Feiglin founder of the Zehut party (Former Deputy and member at Likud Party), Michael Ben-Ari of the former National Union party, as well as Elad Tzadikov. Coalichain currently has more than 32,000 pre-registered users and counting to date – both citizens and leaders that will be using the app.

“Frederic Lefebvre and the endorsement of other leaders of the Coalichain platform is a positive indication that politicians not only want to cooperate with citizens, but they are actively seeking ways to be transparent and direct in the way that they communicate with the citizens they serve,” says Levi Samama, Co-CEO and Co-Founder of Coalichain. “In order to make an impact on the way politics is run, we need the support and engagement of politicians and citizens alike, which is why we are happy to help leaders revolutionize the political landscape and give them the tools to communicate directly with supporters.” 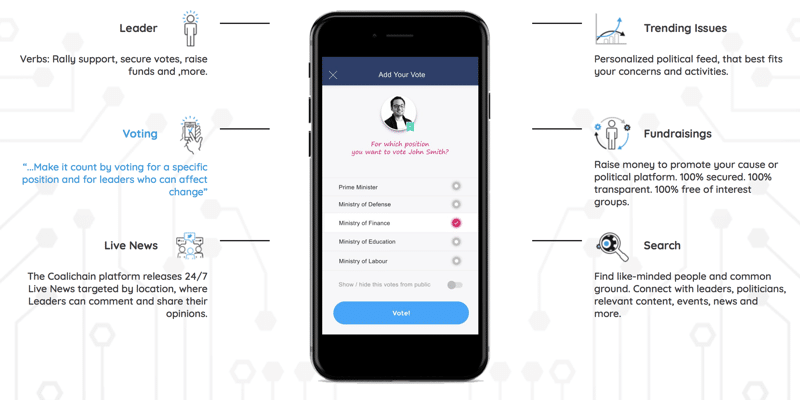 “Technological advances have the opportunity to solve some of democracy’s greatest issues. I am excited to lead the charge as one of the first leaders to adopt Coalichain and its promising platform for political communication. As a political leader, I value any platform that helps me serve the citizens I am representing, and allows them to share their support and discuss ways to improve.” says Frederic Lefebvre, founder of French political party, Agir.

Coalichain’s ICO pre-sale for the ZUZ token began February 28th. The Beta version of the application will be released in early May, along with the crowdsale launch.

More information can be found in Coalichain’s white paper here.

CoaIichain is a blockchain based political communication platform allowing transparent communication between voter and leader lead by Founder and Co-CEO Levi Samama and Shay Galil, Co-founder and CTO.