ModulTrade is a blockchain startup in the trade finance sector with an aim to allow small businesses all over the world to involve themselves in international trades efficiently, securely, and easily.

The ModulTrade ecosystem which is based on a smart contract platform will provide MSMEs (micro, small and medium enterprises) with a complete range of trade services while minimizing transactions costs that support small business from developed and emerging markets to be a part of international trade.

With the ModulTrade ecosystem, millions of MSMEs across the world will be connected to negotiate, agree, and execute trades that benefit parties involved fairly.
We recently sat down with Evgeny Kaplin, the CEO of ModulTrade to have a chat with him about the project as well as finding out his thoughts and insights.

Hi, Evgeny. Thanks for joining us today. Can you tell us more about yourself and ModulTrade?

ModulTrade is a synthesis of my 17-year experience in Trade Finance business and Strategic consulting.
“Blockchain can democratize global trade. Can help over 400mln SMEs to become global players.”
I learned well how banks make money on trade finance inefficiency in Sberbank (where I built and run a global trade finance platform) and in Cargill TSF (Trade and Structured Finance).
During my McKinsey days, I understood that Blockchain can provide secure trade service efficiently and without banks.
Then in a group of 4 MIT graduates, we decided to realize the vision in ModulTrade.

Tell us about how you came up with the idea of ModulTrade.
Did you face a problem with the trade financing or do you think there is a gap in the market for ModulTrade to fill?

There is a gap – 56% of SMEs requests to banks for trade finance are rejected (vs.7% for large corporates). And ModulTrade can fill in this gap for over 400mln small enterprises worldwide.
The idea is to give all-in-one application for SMEs they need to become an equal player in global trade. And the appearance of Blockchain can make this vision a reality.
Overall there are some well-known problems in trade finance, like inefficiencies, fragmented processes and financial non-inclusion that ModulTrade can fix with the help of Blockchain.

What do you think is the biggest problem ModulTrade will solve and why is the problem important to solve?

Over 400mln small enterprises worldwide are not a part of global trade today. Markets are monopolized by large corporates while most of the world population who work in small businesses are not able to trade goods globally.
ModulTrade can establish new world trade routes and helps MSMEs to become effective and to create better goods with better quality and price.

Currently, trade financing is far from inclusive. The global trade finance gap, i.e. the inability of financial institutions to support buyers and sellers of goods across countries is estimated $1.6 trillion, resulting in forgone growth and job creation, while 56% of SME trade finance proposals are rejected. All this while large corporates face rejection rates of 34% and multinational corporations are rejected only 10% of the time.

The idea of the blockchain and smart contracts work extremely well for simple trades between a retailer and supplier, for example.
The tough task, however, comes in complicated trades where multiple businesses are involved and terms are not straightforward as “receive goods, pay seller”.
Is ModulTrade capable of handling international trades that will involve more than two MSMEs?

The smart-contract concept helps to digitalize on blockchain almost every business process which has logic and terms of execution, meaning that the ModulTrade platform can be upgraded to serve more complex business relations and integrates a number of trade participants as well as services like insurance, logistics, customs service, tax, etc. 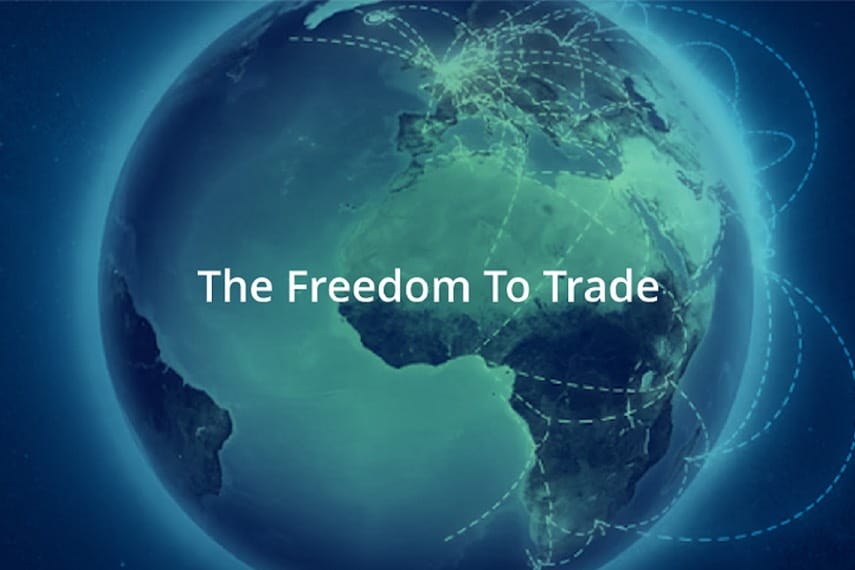 In today’s trading industry, banks do everything you need for you but at an expensive cost. From opening an account to moving money between accounts, even for something as simple as buying online, banks charge you fees for everything which adds up over time. While some may argue that charging

The costs of replication of Letter of Credit (#1 banks’ instrument for trade) on blockchain are just several USD. That’s it.
Now, banks charge 5-15% of the trade amount, ModulTrade can do it at 1%.

Blockchain technology enables a greater efficiency in comparison to how trade financing and global trade is handled today.
Let’s take the letter of credit for example: as I have previously mentioned, smart contracts allow to replicate the letter of credit in a much more cost-efficient way, while banks often rely on obsolete technologies and often inefficient internal processes to deliver this product. And we are focusing on the bank’s internal process only. If we think about the LC from the small businesses’ perspective, then, if their application is not rejected by the bank, the process is something like:
After negotiation, buyer and seller sign a contract.

Buyer’s bank supplies a credit letter to seller’s bank, which guarantees seller will be paid if certain conditions are met.
Seller gives goods to a carrier and receives a bill of lading.
Seller provides the bill of lading to its bank and receives the payment.
Bank gives the buyer the bill of lading so that he can present it to the carrier and receive the goods.
All this cumbersome process will no longer be necessary on our blockchain-based platform: you can negotiate in a depersonalized way on the platform and, once you have agreed on the trade, a smart-contract is created on the platform. That smart-contract blocks money on the buyer’s account to guarantee the payment upon delivery. Upon delivery, it releases the payment to the seller. That simple and efficient!

Can you explain more about the ModulTrade reputation system?
How does it work?

Every user will be able to build a reputation capital within the ModulTrade ecosystem.
Reputational capital is an amount of potential credit the user can get and related fee for this credit. This is a measure of users reputational value on the basis of their behavior in past transactions on the platform. This reputation capital will represent a form of remuneration of the user’s efforts, generating trust and respect within the ecosystem.

For small-medium businesses, finances are still a big deal in international trades.
Is there some sort of financing or credit system in place in ModulTrade or with the MTRc perhaps?
If yes, can you briefly explain how it works compared to traditional financing options?

Yes, there is and it will be related to the users’ reputation capital: funds and guarantees will be granted to small business users in MTRc, also based on their reputation capital for the period of up to 30 days. Credit lines and related fees will be established on the reputation capital built by the enterprises, which in turn will be the function of the network recommendations, as assessed by ModulTrade’s Reputation System.
Token Holders will be able to provide MTRc for a fee to users to finance trade transactions. On the base of Reputational capital ( potential credit amount and related fee) – P2B and B2B lending in MTRc.
On the flipside, what has been the most painful, or perhaps the most regretful decision you’ve made with ModulTrade?
We are on a positive side of ModulTrade development now 😉

Is the ModulTrade platform already working with notable businesses or firms? Are there any future partnerships in the process?
If yes, can you explain briefly about it?

Yes, we agreed with our supporter German marketplace Contorion (https://www.contorion.de/) to pilot ModulTrade smart-contract platform in serving trade transactions from China to Germany and further in EU countries.
We found a concrete client demand for trusted and efficient trade services that will help ModulTrade in a fast building of further partnerships with marketplaces and MSMEs.

We’ve seen the Ethereum network lag out during peak periods.
Let’s say that ModulTrade achieves a million users by 2020. How will this affect the ModulTrade blockchain?
Do you have a system in place to prevent network congestions from happening due to too many transactions?

From the beginning, we have been structuring the ModulTrade platform development so it can be scalable for millions of MSMEs. The platform can be switched to other faster blockchains if needed. While we also believe in the evolution of the Ethereum itself.

Why did you make the choice to use the MTRc token as the backbone of ModulTrade?
Can you also explain more about the process of planning and designing the MTRc token to specifically fit in ModulTrade’s ecosystem?

MSMEs need an efficient instrument for trade. And MTRc is structured as a key to the global trade – the first crypto token for B2B trade.
We work on the infrastructure which gives a stable and easy instrument to buy goods and services for every business which has access to the internet.
You install ModulTrade App, get Reputational credit in MTRc and start trading globally. 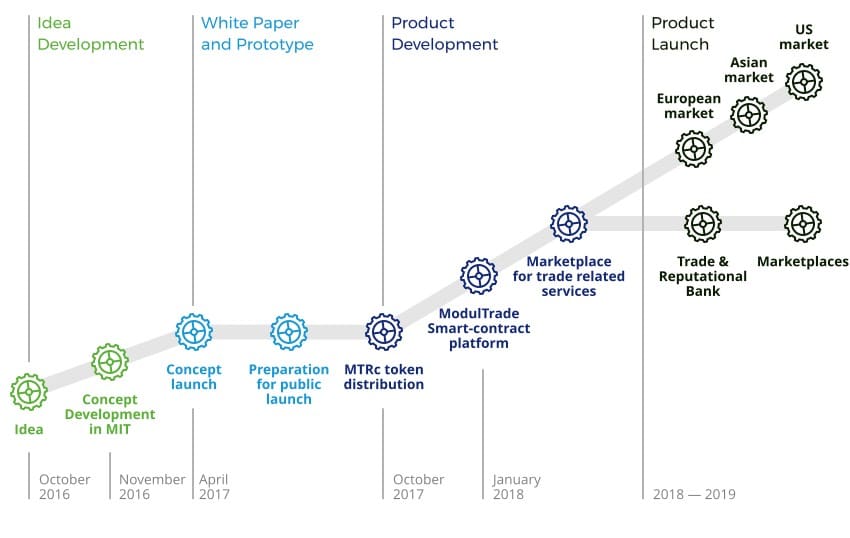 What do you think is the biggest challenge or obstacle ModulTrade will face? How do you plan to tackle that challenge?
The absence of regulation for blockchain solutions and cryptocurrencies as well as low acceptance by MSMEs community.
Statistics prove that we are now in an evolutionary process that will quickly adopt new fintech developments including cryptocurrencies. And ModulTrade will pioneer and help this new reality to appear in trade finance.

My target is to use my energy, internal resources and time in the most efficient way. My morning starts with a cold shower then intellectual work followed by team collaboration and continued with external communication and of course swimming, I really like it.
Now my working hours are close to my McKinsey days but with much more energy due to my belief, personal ambition, and interest in what I do.

It will change the way people live together. Blockchain creates a base for democracy or even communism in the social and economic life of people around the world.

I dream to make a world tour on a sailing yacht 😉 and to help my four kids to grow up and enjoy a new world where blockchain makes their lives better.