There’s no doubt that virtual reality (VR) is no longer a gimmick with the technology being increasingly used in businesses and everyday actions.

According to a study by Goldman Sachs, there will be nearly 100 million virtual reality users by 2020 with more than half of the number highlighted as users consuming video content.

The market cap of VR is extremely optimistic with experts suggesting that it could reach as much as $70 billion by 2021. This statement is further backed by investments; in the past 5 years, global investments in the VR/AR industry have exceeded $3.5 billion!

One of the biggest changes VR can bring to the world is its potential to fundamentally change how people consume information.

There are inherent problems within the VR ecosystem, however.

The first issue is the problem with payments for content creators. It is well known that many content owners remain underpaid (if they are even paid) for their work which limits the quality of their content as they don’t have the budget to produce high-quality work.

The reality in this industry is that there are too many intermediaries involved who may or may not be reliable. To add salt to the wound, payments are constantly delayed and fees are added on top of the initial payment.

Another issue with VR is that unlike 2D streaming which requires a small amount of bandwidth, live streaming in VR would need a more complex approach which inevitably eats up bandwidth.

Aside from being high-resolution, VR streams are literally doubled as they have to compensate for each eye. This increases the load since decoding and transmitting two streams at once requires significant computing power and bandwidth.

Finally, piracy is still a major issue for content providers. Steps have been taken by businesses and even the authorities to reduce privacy; unauthorized live streams, however, are just as widespread today with piracy being more accessible than it ever was.

Prosense is a business looking to solve the burning problems within the VR industry.

They plan to do this with the development of ProsenseLive, a platform that aims to transform broadcast technology from the traditional centralized model we’re used to, to a decentralized peer-to-peer model that works globally.

What makes ProsenseLive unique is that the platform will be the first P2P live streaming VR-platform that is accessible by global audiences.

Users of the ProsenseLive platform will be able to access both professional and amateur content, such as live broadcasts of sports games and concerts as well as user-generated content like live cams or webinars.

With the help of the blockchain, ProsenseLive also offers professional and amateur content creators the chance to produce live VR content on an affordable distribution solution that is extremely scalable and less censored than existing options.

The platform works this way.

To handle the process of video encryption, the transcoding process, as well as the delivery of content, there would be a decentralized network of Prosense Nodes partners working with the platform.

These node partners are then rewarded with VRP tokens, the official cryptocurrency of the Prosense platform.

Readers should also note that ProsenseTV is already a well-known and established company from Russian. The platform provides a wide range of VR broadcasting services and has successfully worked with companies like Google, Coca-Cola and Ikea in over 50 projects.

Advantages of the Prosense platform

The biggest advantage of the platform is its decentralized nature.

Decentralized platforms use peer-to-peer transactions which are essentially data transfer architectures based on the idea of equality for all network members. There will be no dedicated servers or networks, unlike centralized services like Twitch or YouTube.

In decentralized networks, all of the participants in the platform are both clients and servers.

The main advantage of using a decentralized network is the nearly complete independence of the network’s working capacity. Building and maintaining servers to handle thousands of users is not only expensive but also hard to maintain without errors and failures. 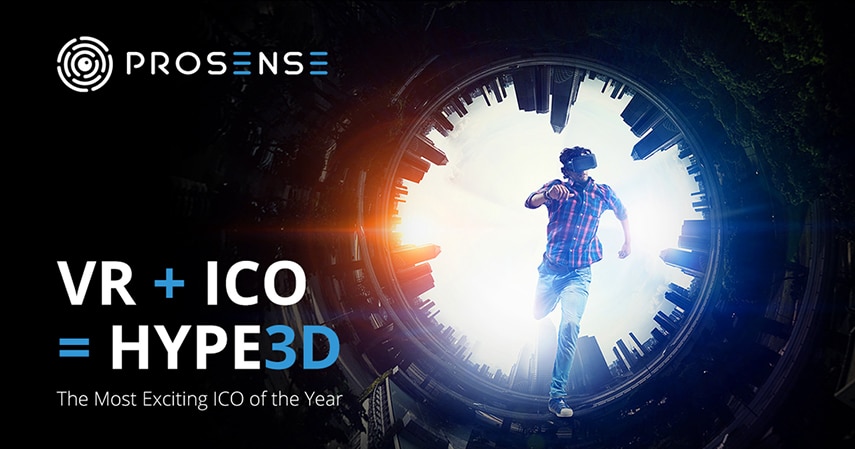 The other advantages of using a decentralized platform are:

ProsenseTV will also reward content creators by providing them with a transparent and efficient way in making money from content.

The blockchain guarantees that the payments are directly and automatically transferred from users to content providers as soon as the user accesses the content.

It is also impossible to fake or artificially inflates​ the statistics or the number of views on the platform. Everything else is strictly regulated and implemented with smart contracts so that content creators and users are both fairly rewarded.

ProsenseTV is also fighting against content piracy by planning to protect content streamed through ProsenseLive with a special tracking code next year.

The tracking code will be processed using Proof-of-Existence blockchain technology of the platform in order to provide 100% transparency and security. This code will then allow content owners to track their streams during each phase of delivery up to the end user.

All the content in ProsenseLive platform will also be distributed​ to multiple partner nodes which makes it impossible for viewers to illegally copy the content on the platform to somewhere else.

ProsenseTV will launch a token sale for the VRP token.

The VRP token is a secure, internal currency that will be used by users to pay content creators directly for their content.

A percentage of each transaction will go to associated node owners as a reward for their participation.

The VRP token will also enable token holders to directly pay for other services such as launching their own broadcasts as well as unlocking access to unique features, such as player customization or various social functionality