2016 wasn’t Samsung’s year at all: the well-known scandal regarding the exploding Note 7 phones was enough to turn many people away from both the Note and the Samsung brands, thus making it even harder for them to win a big piece of the market share with their annual flagship release. However, it seems that Samsung has noted the criticism received and has moved on, as the company’s next flagship phone, the Samsung Galaxy S8 is set to be released on March 29, as part of the Galaxy Unpacked event.

Both the phone and the event come at a critical time, as they represent the company’s shot at redeeming their public image and attracting customers once again. The phone’s design has already been teased by Samsung in a 30-second ad that announced the Galaxy Unpacked event. However, will a curvy design be enough to make people forget about the shortcomings of the past, or will the phone’s specs manage to dazzle consumers back into the Samsung brand?

While several details have been leaked online, what is currently known for sure is that Samsung will pay a lot more attention to the handling of the batteries in order to avoid last year’s scandal happening all over again. Supposedly, the Samsung Galaxy S8 will have more space allocated for its battery and will use a revised testing procedure in order to assure consumers of its safety.

If you want more details about the Samsung Galaxy S8 Plus, then you should know that the main difference between the two models is the size. While the S8 is expected to have a 5.8-inch display, the S8 Plus may have a 6.2-inch one, along with a larger battery and a larger body to make room for these changes. 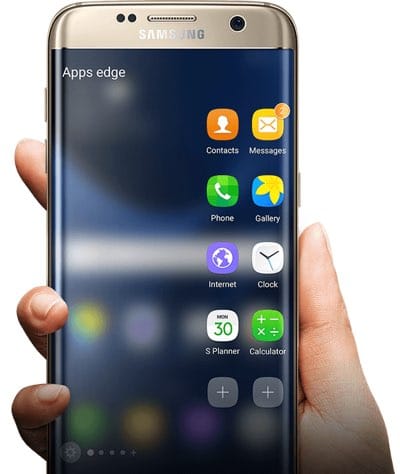 The Samsung Galaxy S7 Edge was groundbreaking. What will the S8 bring?

So what else is known about the Galaxy S8? Well, first of all, it seems that Samsung wants to get on with the rest of the cool kids and swap the Micro USB port with the increasingly-popular USB-C port. Despite early rumors, everyone can rest easy, as Samsung will not remove the headphone jack as Apple did.

Initially, it was believed that the flagship phone will feature a state-of-the-art fingerprint scanner inside its display, but recent reports state that Samsung ran out of time to implement this feature. Therefore, fans of this feature will have to wait an extra year for the Galaxy S9 to come out. In the meanwhile, the Galaxy S8 will have a fingerprint sensor on the rear, positioned to the right side of the camera, which may put left-handed consumers in an awkward position when trying to simply unlock their phone. An iris scanner is also reported to be included on the front of the device, as Samsung included it in the failed Note 7.

Regarding specifications, Samsung leaves nothing else to be desired, as the Galaxy S8 and the Galaxy S8 Plus are packed with top-of-the-line components such as a Snapdragon 835 chipset, 4GB of RAM, a 12MP rear camera, an 8MP frontal camera, a 3,000, respectively 3,500 mAH battery, and different sizes of storage available, starting at 32GB. The phone will run Android 7.1 Nougat, of course, modified to use Samsung’s TouchWiz interface. Additionally, the phone will feature an exclusive assistant called Bixby AI, meant to be Samsung’s answer to Apple’s well-known Siri assistant. It seems that Samsung has great expectations for Bixby, as they have even reserved a button on the side of the new devices that will be used exclusively to summon the assistant.

By far the phone’s most unique feature is its sleek design, on which Samsung also seems to rely their hype campaign on. Featuring a Quad-HD+ SuperAMOLED dual-curved-edge, Force Touch, always-on display, the phone does away with most of the bezels, making it so that the screen covers 83% of the surface of the phone. This comes along with a complete redesign job, making the phone look a lot sleeker than would be expected, as it doesn’t offer a button on the front. The design of the phone is something that Samsung expects to blow consumers away, as they have even made a 30-second ad solely to advertise their designers’ ingenuity in making the phone stand out of the crowd.

Besides these almost-certain details about the upcoming flagship devices, there have been some confusing and incredible rumors. Without a doubt, one of the most farfetched ones is a rumor claiming that the Galaxy S8 will dual-boot Android 7.1 Nougat and Windows. It is unclear why Samsung would let users jump ship from their prized interface, and even more unclear why Microsoft would give their competitors access to Windows 10. However, as impossible as that may be, it would certainly make for a surprise feature that would take the tech world by storm, and just maybe create an actual market share for Windows 10 mobile.

It is unclear whether or not Samsung will manage to win back its fans with its annual flagship, especially considering the fact that it was one of their flagships that turned most fans away from their brand. However, the rumored specifications and features are certainly intriguing, and the sleek design of the phone is sure to have lots of fans. If you want to learn more about the Samsung Galaxy S8 and the Samsung Galaxy S8 Plus, stay tuned, as we will post news about the phone as soon as they are available. Additionally, you might want to keep an eye on Samsung’s official social media pages for the March 29 live event, in which the new flagships will be officially unveiled.

It is unclear whether or not Samsung will manage to win back its fans with its annual flagship event, especially considering the fact that it was one of their flagships that turned most fans away from their brand.