Over the last decade, the nature of work and service has changed in some subtle and other not-so-subtle ways. A lot of this change is precipitated as millennials, that incessantly mobile and eccentric generation, make their mark on the economy by looking for new and better ways of doing things. As a result, a novel, more participatory economy emerged. Hotels, taxis, rental services, even traditional corporate structures are all being upended by this new movement.

These changes take on a variety of names. Some see themselves as freelancers, others are participating in the “gig economy,” and it’s collectively known as the sharing economy. Regardless of the title, it’s a gigantic market. According to freelance exchange, Upwork, nearly 60 million people are freelancing. What’s more, the Brookings Institute estimates that the sharing economy will be a $335 billion industry by 2025.

At this point, the sharing economy isn’t just lucrative. It’s incredibly expansive. Uber, frequently seen as the preeminent sharing service, is joined by a host of competitors that offer their own unique take on the ride-hailing industry. Another front-line company, Airbnb, is experiencing similar market dynamics. It’s not just competitors who are crowding the market. New services and ideas are constantly emerging. As the sharing economy becomes more mainstream, additional companies diversify customer options but also complicate the market. 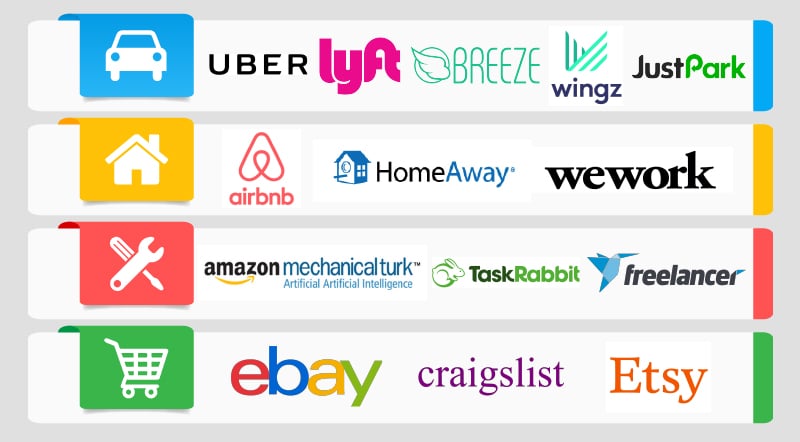 Currently, there is no single marketplace where users can go to participate in the sharing economy, and that’s a huge problem. With so many disparate platforms popping up, the movement’s growth potential is being stymied by opportunity overload, and users are not able to benefit from diverse offerings made possible by the sharing economy.

The sharing economy needs a central marketplace to bring together the diverse platforms that collectively comprise the industry. Ironically, ShareRing, a decentralized blockchain-based platform is doing just that.

In many ways, ShareRing can be considered the Amazon of the sharing economy. Using a simple single sign-on feature, it brings together unique services and platforms into a single marketplace and uses blockchain features to improve the process. For example, ShareRing users will be able to procure an Uber from the airport, arrange lodging from Airbnb, and ensure their pets are attended to on DogVacay all while remaining inside an easy-to-use app.

In addition, ShareRing uses its native digital currency to make payments more comfortable, more reliable, and more secure. By introducing the blockchain’s smart contracts to the sharing economy, ShareRing creates a trustless payment structure in an environment that necessitates a lot of trust and confidence. After all, letting someone stay in your house for a fee requires an extraordinary amount of confidence in the entire process.

The blockchain is renowned for its security features, which help bolster ShareRing’s ability to provide a safe, secure experience for everyone. By eliminating the needs for multiple accounts among many different services, ShareRing users can constrain all of their information to a single account. Moreover, the blockchain’s decentralized network is much more secure than traditional, centralized servers, so even that information is more secure than ever before.

A Resume of Success

ShareRing’s development team has been here before. They are responsible for Kaez, a car-sharing platform that has more than 300 car-sharing locations around the world. With strategic partners including Toyota, Telstra, Envoy, and Merchants Fleet Management, they are already making significant inroads into the industry.

Both blockchain technology and the sharing economy launched around the same time, and their tandem rise will be a disruptive force for many industries. They share a common ethos that celebrates forward-thinking idea, individual autonomy, and unique value exchanges. ShareRing’s combination of experience and cutting-edge innovation will harness the power of the blockchain and the possibility of the sharing economy in ways that offer a better, safer customer experience.