Synereo, the company offering blockchain-enabled attention economy solutions, is announcing today the official launch of WildSpark, a social network web app supporting Imgur, Medium and YouTube creators where they can be rewarded in cryptocurrency for the value and content they generate – no middleman or pay cut necessary. Synereo is also announcing that it will burn 307 million AMP tokens (approximately $100 million USD worth), representing 33.33% of all Synereo-held AMP. The WildSpark launch will drive growth to Synereo’s community (writers, photographers, video and meme creators and consumers), who use the token on a daily basis.

Creating high-quality content is difficult, but making it profitable is even more complicated. Currently, social media giants like Facebook and Instagram use advertiser-centric algorithms to make money off of user-generated content leaving the content-creators themselves without much reward for their insightful value and efforts. Imagine that every video, photo, or even meme you create on the internet gets you the value it deserves – without anyone else taking a cut.

WildSpark is a user-centric platform, meaning that value is created and measured by content that people like and appreciate. In its beta phase, WildSpark’s registered users, including writers, photographers, video and meme creators, are already fairly and freely monetizing their content and have a combined 1.5 million subscribers. When a reader or viewer enjoys a piece of content, WildSpark enables the user to show support for the creator by instantly sending them cryptocurrency rewards. These fans are themselves incentivized to further support the creator by distributing the content, as they are rewarded with AMP for sharing the content to the right audience. WildSpark’s network allows value and information to flow freely, cutting third parties out of the equation. 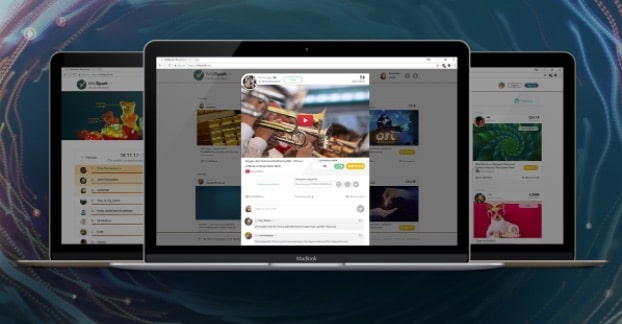 The more value a piece of content has, the more creators and curators will be rewarded in AMP tokens (opposed to the platform reaping the financial benefits of the content made), the more attention it will receive on the site, ranking higher in the display algorithm. This way, users are guaranteed that their efforts are rewarded and will be able to use their AMPs for real-life services, as well as making content they love receive more attention on the WildSpark site.

“The internet wouldn’t be what it is without the content that people create and share with one another,” said Dor Konforty, CEO and co-founder of Synereo. “Content creators deserve to be rewarded for the value and engagement they contribute through better monetization tools. The release of WildSpark is a major milestones for us in reaching our goal of creating the Liberated Attention Economy based on novel decentralized technologies. Now that our growth milestones have been met, we are happy to burn our tokens and make AMP much more valuable for our users.”

Synereo’s meticulous funds management allowed the company a full year of clockwork delivery at a low burn rate, relying on AMP reserves far less than projected. The increased value of its Bitcoin holdings have also made it possible to assure more AMP sales will not be necessary in the foreseeable future. The upcoming burn event will make each AMP more valuable and will create favorable conditions for Synereo’s community, early investors, content creators and curators using the token on a daily basis.

Synereo, founded in 2014, is the brainchild of Dor Konforty and Andy McCutcheon. Synereo offers blockchain-enabled Attention Economy solutions, allowing direct and platform agnostic monetization of original content posted anywhere on the net. Its first product, WildSpark, provides an entirely new way for original content to be monetized and lends to a freer and fairer Attention Economy.