Universa, the next-generation blockchain technology, has officially launched its mainnet.

The Universa Mainnet was launched on the 12th of April, capping off several successful weeks of rapid progress for Universa.

The Universa team is currently developing the remaining fundamental smart contracts of the network with an expected delivery time of two to three months.

Nevertheless, the team has already begun to establish partnerships and networks with countries around the globe to implement the Universa blockchain in areas such as fintech, supply chain management, and government registry digitization among a list of other sectors that can be improved by the Universa platform.

Universa partnerships in other countries

Universa has begun working with several countries to implement the use of Universa in sectors that could be improved by the use of the blockchain.

One of the countries involved is Kazakhstan; the team discussed the possibility of using the blockchain to improve the capabilities of financial transactions monitoring with Alik Jatkambaevich Shpekbaev, Kazakhstan’s head honcho in combating corruption.

Other discussions involved using the blockchain to implement a Public Official ID to improve the tracking of an official’s work as well as discussing the potential of blockchain technologies in realizing Kazakhstan’s “Digital Kazakhstan” initiative. (a state program established by the Kazakhstan government to improve and develop the country’s digital ecosystem)

Universa was also one of the two technology blockchains invited to Turkey’s first ever National Blockchain Forum which shows the country’s acceptance towards the Universa project.

The presentation by Universa CEO, Alexander Borodich, was focused on Smart.Money, a technology that enables blockchain transaction between countries that could create national cryptocurrencies and even beyond national boundaries.

The icing on the cake of Universa’s progress is in Russia, where a special economic zone named Cryptopark will be established in Stupino to develop and maintain upcoming crypto and blockchain projects. Cryptopark will use Universa for asset tokenization as well as being the official digital platform. 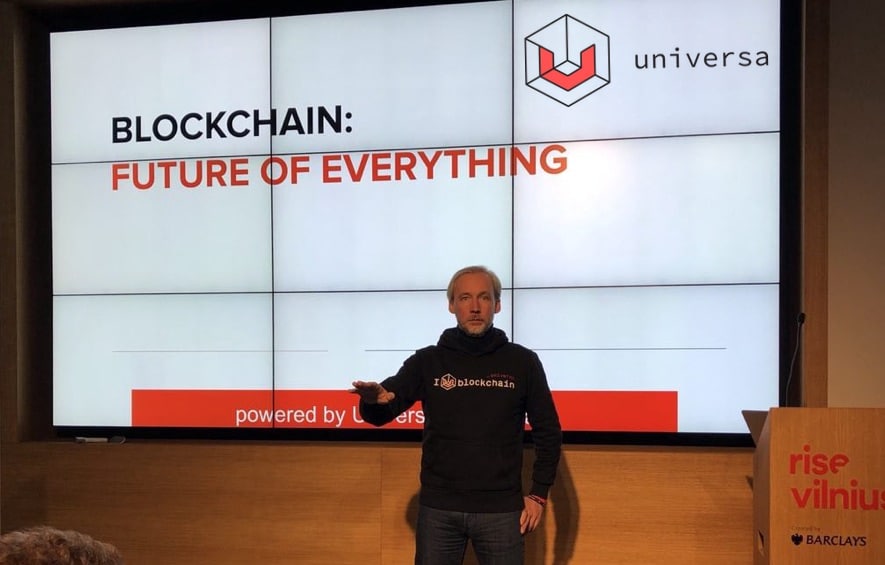 These developments were encouraged by the Russian Association of Cryptocurrency and Blockchain (RACIB) which chose Universa as the preferred blockchain technology solution at the recent BlockchainRF-2018 Congress.

In tandem with the release of the Universa Mainnet, Borodich hosted an AMA (ask me anything) session on Telegram to answer questions from the public and investors.

Below is a summary of the session:

Q: To run a node in Universa, the node owner has to have 1 million UTN(P), pass the KYC requirements and have the proper hardware needed. A license is also required to run a node.

There have been multiple conversations about this with(in) the community. Both purchasing a license and staking, locking etc. mechanisms have also been discussed. Could you enlighten us on how Universa is planning to approach this? How will people obtain their licenses to run a node?

A: We would like to perceive Node Owners as our Partners and the goal is to make this job profitable enough to make it prestigious and important for the society. So, in general, what is good for the node owner is good for the Network.

A license is needed:

2) To prevent different types of attacks e.g if a node does not keep the service level agreement, it will be shut down by the node’s smart contract.

The staking or fee is required to obtain a license. If you check the previous answer – we would like you to operate the node and not to lose your tokens. So, the 1 million tokens paid to obtain a license will be held in the Node Smart Contract securely.

Q: Is there a minimum amount of time for a person has to run his/her node? After this period would it be possible at all times to waive/give up a license and regain the 1 million tokens?

A: The minimum period to host a node currently is 12 months. Later on, all of these parameters will be available in the Node’s Smart Contract and will be managed automatically.

Q: What would happen if, for example, 300 people would want to run a node but only 100-200 nodes are wanted for the first year. Will there be a mechanism that selects people and what is it based on?

A: We are still having internal discussions on this topic. We have a first-in, first-out list of nodes at the moment, but we are open to recommendations.

Q: How will rewards be paid to node holders? Will this be in UTN(P) or in other currencies?

A: UTN always, as it is the only fuel we have. All transactions will be paid in UTN, even if a business has a fiat contract on paper.

Q: Will rewards be paid daily, weekly, monthly? Since transactions are pegged to 0.01 USD, will it be in an UTN equivalent based on exchange rates?

A: Instant conversion is available for payments. Payments are also going to be released monthly or bi-weekly; we will have the community of Node Owners to decide the process.

Q: Let’s say that I run a node and have my tokens locked for 12 months. What happens after 12 months if:

1) I regain control of my tokens and I sell them on the market, or I take them out the smart contract? Do I “lose” my license to run a node?

A: As long as you operate the node, the tokens will be locked. However, you will be able to get it back and return the node license to the pool at any time.

Q: Would it be also possible to transfer my license to someone else? For example, another interested individual pay me 1 million tokens; would the license and locked tokens now belong to the new node owner/operator?

Alexander: We will create a special smart contract to sell the license to the new owner. The internal escrow will help you to transfer the license securely and to get your tokens back.

Q: Can US citizens run a node?

Q: Does there have to be a new owner of the node before I can sell the license and receive the tokens back?

A: No, the network will automatically lose your node and you will get your tokens back even if there are no new owners at one time.

Q: How many people have currently expressed interest in running a node?

Alexander: More than 100 at the moment.

Q: Let’s say I own more than 5 million tokens and want to run 5 nodes. Is there any bias against one person (or group of people) running multiple nodes?

A: Being libertarian, I prefer to give 1 license and then put the next license request to the end of the line for fairness’ sake. However, we are going to automate this process to make it as equal as possible but also as spread out as possible. The number of nodes per region might be limited.

Again, we would like to have a high independence and high diversity, so the number of nodes per owner will be limited by contract.

Q: Will there be a list of cloud companies from where we can rent servers according to Universa’s hardware requirements? Can a server be virtual or only physical?

A: If your setup passes our hardware test, we don’t mind even if it’s virtual. We highly recommend node owners to have the physical hardware, though.

Q: How many nodes will be run by Universa itself?

A: Ideally, less than 10% of nodes per network.

Q: What will be the rate of adding new nodes? Could the market crash if all staked tokens come to a market and get dumped 12 months from now?

A: We cannot control it, the smart contract is responsible for the sale of nodes. The network in a year will be strong enough to survive a market dump, as I predict from current projects.

Q: Is there an estimate on when people who already filled in the node hosting request form to receive a response? Is there a timeline for that?

A: I would expect things to start next week.

Universa’s timeline for the next 100 days

Universa has also released its plan for the next 100 days in line with the company’s plan to deliver on its roadmap rapidly.

Previously, the team has already completed its Smart Token goal. Instead of doing that, the team moved on with a universal smart contract template that could create complex smart contracts in a seamless fashion. The platform’s Liquidity Ocean is currently being tested with a bank customer while Universa’s Blockchain Academy has been officially launched. 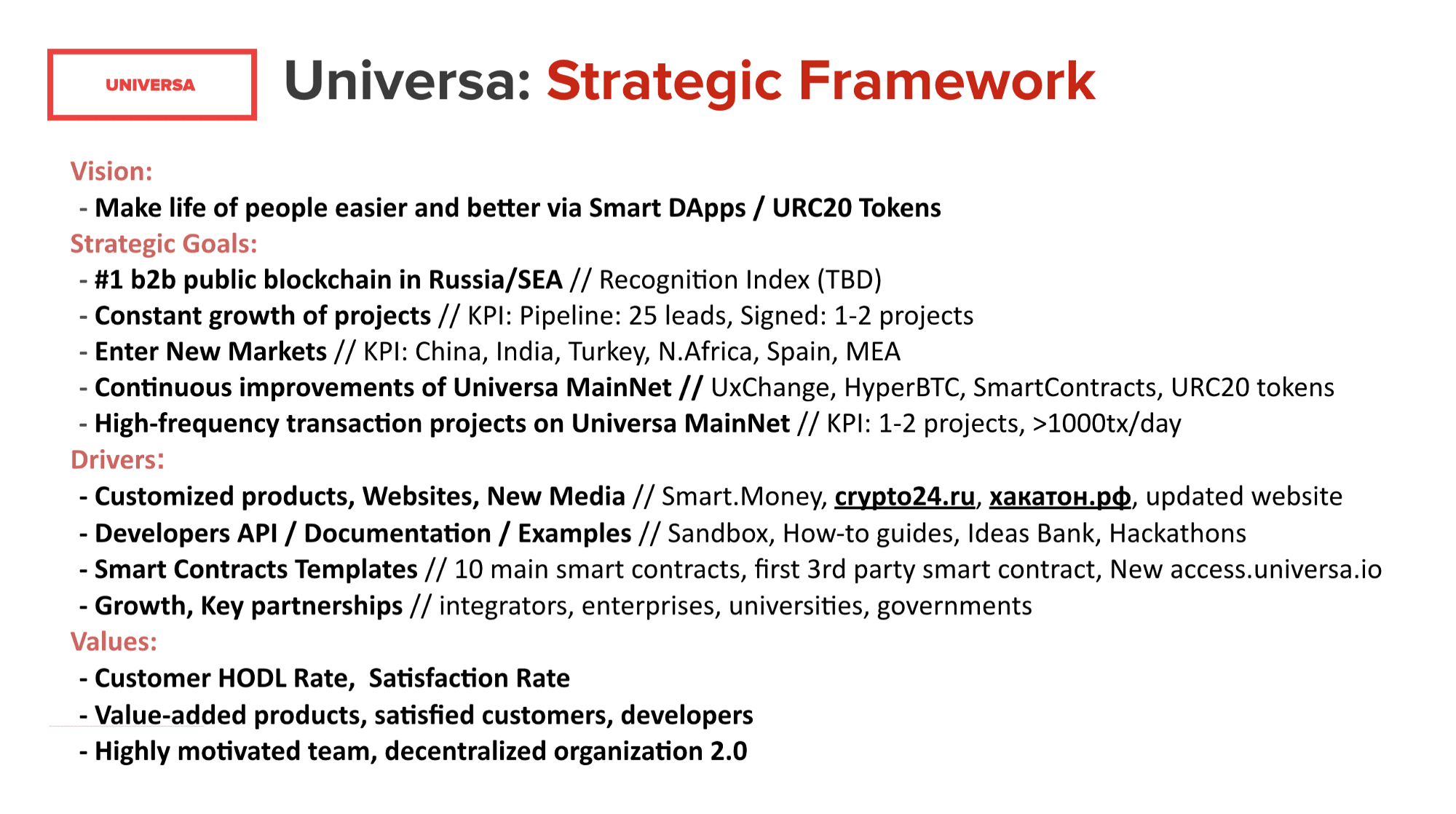 The main goal of the next 100 days for Universa is to develop a sales mechanism to enter new markets and expand the company’s presence in several regions and countries including South-
East Asia and Europe. The focus will be on verticals that can benefit immensely from using the Universa blockchain, with 5 main verticals being identified by Borodich:

UTN tokens will also be released while the team will also be focusing on working with Bitcoin and Ethereum blockchains to ultimately releasing smart contracts that can work seamlessly across different blockchains.

Finally, the team will also be improving their marketing and communication efforts in the next 100 days, starting with publishing reports every two weeks for the public to view.

If you’ve missed out on our previous coverage of Universa, click here to read it.