Blockchain is a hot topic in places where the rich and powerful meet to decide policy and invest personal and family fortunes.

Vimana , is a blockchain start-up. And it is about to hold its ICO. That said, the similarity between this company and its coin offering to the average crypto raise right now is pretty significant.

Beyond its blockchain aspirations, the company has already produced air-borne urban mobility vehicles that are getting attention from Dubai to Davos.

But what does that prove, apart from the considerable (non-cyber) bank the company clearly has access to? Why does being present in such venues mean anything? Starting from a generic technology perspective? Much less a blockchained one?

Last October, the company was in Dubai making several important pitches. The first was to the Ministers of Infrastructure Development from the UAE and the CEO of the Roads and Transport Authority of Dubai at the Arab Future Cities Summit, where Vimana also became a gold sponsor.

The event presented both pressing global policy challenges and evolving technologies that pose the most promise in meeting some of the world’s greatest problems. After the event, the connections made during the conference led to a further meeting between the head of infrastructure in Dubai and Vimana to discuss how they might work together in the future.

Less than a month later, the company also had the opportunity to present a full-scale prototype of their air taxi at the Arabia Wealth Summit. It is an event with a reputation for bringing together the region’s wealthiest investors with an eye to making money and solving problems. In this case, the company was able to pitch its ideas to those looking for unique social investments.

“Vimana’s presence at the Wealth Arabia Summit certainly generated plenty of intrigue. The venue enabled (the company) to showcase what the future of travel may look like for Dubai and other cities worldwide moving forward,” said
Daniel Bateman, organizer of the event. “Vimana went away as one of the most talked about sponsors of the day.”

In January, less than a month after closing a multi-million dollar angel round and kicking off a token generation event (TGE) to begin building out its own blockchain and system token, the company was at another high profile, global event.
This time it was Davos, the legendary Swiss resort meeting of bankers and policymakers from around the world. 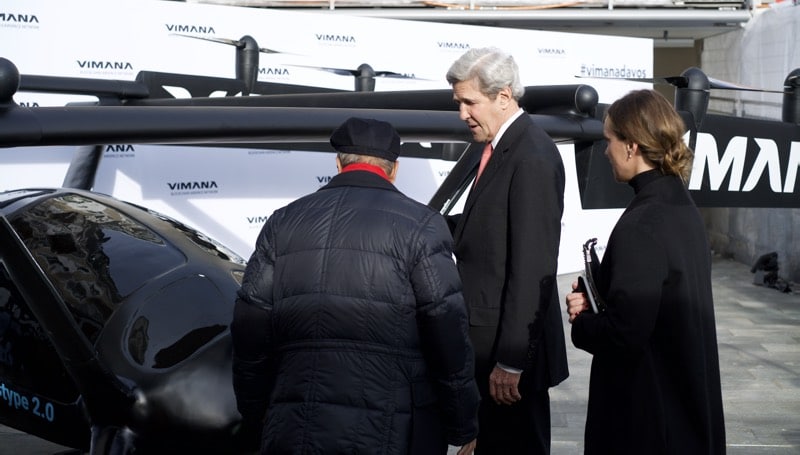 Here Vimana not only showed their vehicle. They also unveiled the first look at their blockchain – the first protocol for airspace and the management of it. As Evgeni Borisov, the founder and CEO of the company said, “Vimana Global is extending the blockchain into the air, and delivering the technology that would enable unmanned flights to launch and fly safely in any national airspace.”

Governments all over the world right now are being forced to deal with not only cryptocurrency and its regulation, but the regulation of blockchain as a technology- no matter how or where it is applied and used. This is especially true in areas like energy, utilities and transportation.

Beyond the autonomous vehicle Vimana has developed, the company is actually in a new kind of space being opened by the acceptance and development of blockchain. It is an important thread in the ongoing discussions about what it will enable as the world faces a new and differently regulated future.

The problem is, when confronted with just one amorphous technology that is invisible, policymakers (not to mention investors) have a hard time connecting theory with practice.
Vimana’s approach shows these audiences exactly how to begin to do that.

That is leading to even more successful avenues for the company to explore – as well as the ability to raise funds to fuel that vision. This high profile approach that is easy to touch and feel has also directly led to the success of Vimana in signing agreements with multiple municipalities to begin to roll the project out in real time and in real life.

During the first week of February, the company announced that the TaaS fund had contributed its largest ever portfolio contribution to the Vimana vision. TaaS is a Singapore-based fund, dedicated to blockchain assets, with a string of successful crypto investments to its credit. These include Bancor, TenX and Singularity.

The TaaS investment in Vimana, of 2071 ETH, was equivalent to $2 million at the time.
It is clear that this company too is impressed with the unique connections of tech, policy, infrastructure and entrepreneurialism on display at Vimana.

Funded up until the launch of the token generation event late last year by serial angel investors from aerospace and blockchain industries, Vimana currently has a four-seater, version 2.0 prototype of its air taxi.

The vehicle is designed to become the backbone of the first Smart City Blockchain Airspace network that would host other autonomous flying vehicles and airspace specific applications.

VIMANA Global has also already executed several Smart City strategic agreements and is expected to announce its first Smart City rollout soon. The company already presented its solution in November to the Monaco Blockchain Legal Investments Forum as a unique way to connect Nice airports to hotels and private residences.

Will it be Nice first or another lucky city? Vimana has agreements in place with 35 municipalities and other locations.

Stay tuned. Where-ever the first rollout or the subsequent ones, this is a company clearly headed for the stars!