WePower has teamed up with various energy industry actors and producers in Estonia to design a full cycle tokenized energy ecosystem, from industrial production to consumer consumption, on blockchain.

WePower, the blockchain based green energy trading platform, announces today that it has completed a round of partnerships that will enable a full cycle blockchain-based energy trade across the country. This marks a significant step in showing both the importance and vitality of blockchain technology to energy sector on a meaningful scale. On February 1 2018, WePower successful raised $40 million, making it one of the most demanded blockchain projects of the year.

Estonia has been at the forefront of digital innovation for a number of years now. In December 2014, Estonia has launched its E-Residency program, which created an opportunity for anyone with an internet connection to gain access to company formation, banking, payment processing and other government services that were only available to its physical residents before. In 2016, it has completed the first nationwide rollout of Smart Metering systems and in this way brought their power grid fully into the digital world. More recently, Estonia has started driving towards crypto adoption with an intention to release its own coin estcoin and in this way attract an emerging crypto business community to use Estonian e-services.These activities have created a unique development environment for WePower to fully test a holistic energy trading ecosystem at a country-wide scale.

WePower has made three strategic partnerships with energy companies in Estonia that will allow for the nationwide adoption of a blockchain based green trading ecosystem.These partnerships span the energy sector from production, through transmission and to consumption:

These three partnerships will allow Estonia, with the help of WePower, to test blockchain technology’s ability to bridge different elements of its energy sector, from production to consumption, creating a whole new level of transparency and global capital flow opportunity into the green energy development. Elering will help connect energy production tokenization with the energy supply infrastructure; Eleon, will help WePower test energy tokenization on the energy production side; and 220 Energia, will help develop tailored retail energy solution and services needed to have the tokenized energy bought and traded. 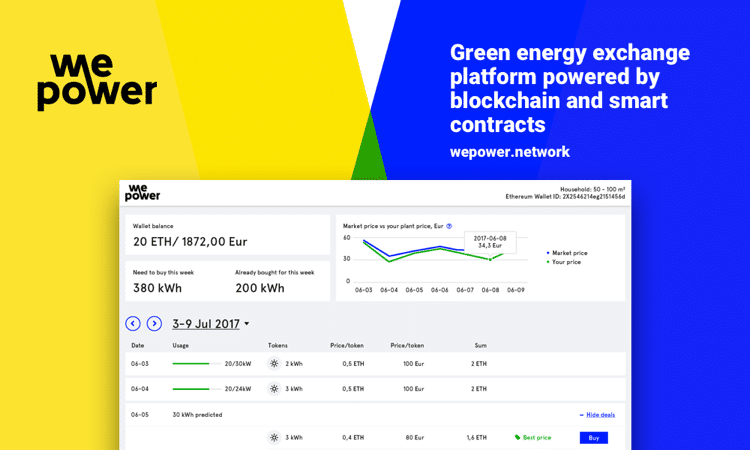 WePower has chosen Estonia as the testing ground for a national blockchain based energy system, as the country already has the infrastructure for a fully integrated solution across the whole value chain. Estonia offers both proclivity to digital innovation, cryptocurrency and the values that blockchain brings, as well as key partners that are willing and ready to work with WePower.

“WePower has shown that green energy and sustainability are some of the most supported challenges by communities across the globe that blockchain can solve,” said Nikolaj Martyniuk, Co-Founder and CEO of WePower, “We are excited to implement our technology into Estonia’s smart power grids, as it is a perfect case for new energy system testing with findings applicable in Europe and beyond. Our partnerships there will help develop the world’s first nationwide tokenized energy system, a huge step in blockchain based green energy adoption.”