While just about every new smartwatch released nowadays features a GPS tracker, they certainly don’t come for cheap. At least that was the case until Amazfit decided to release their newest smartwatch, the Amazfit Pace, which combines minimalistic and clean design, GPS tracking capabilities and a low price point in order to offer the best value on the market.

The Amazfit Pace Smartwatch comes in a sexy package.

The company behind the Amazfit Pace and the Amazfit fashion line, Huami, was launched in 2014 and since then has partnered with Xiaomi in order to create wearables such as the Mi Band. Now, the company is coming out with a brand new range of fitness trackers and smartwatches. Among them is the one we’re looking at – the Amazfit Pace.

The reasons to pick up the Pace (no pun intended) go way beyond its affordability, as the smartwatch gives its competitors a run for their money. First of all, the feature that its marketing campaign is based on is the GPS capability, which effectively turns the smartwatch into an accurate fitness tracker, eliminating the need for a standalone one. That being said, the Amazfit Pace does a stellar job at emulating a fitness tracker, as it can track every single detail about your run, from basic elements such as distance and time to specific ones like altitude, elevation gain and loss, average cadence and more, all while using the integrated GPS capability to allow users to track their run routes and distances. The smartwatch also does an amazing job at accurately tracking the user’s heart rate during workouts.

One nifty little feature that the Amazfit Pace has is the “stand up reminders” it occasionally gives out. The way these work is that whenever the device detects that you sat in the same place for too long, you’ll receive a notification that alerts you of this and encourages you to move around.

Another great feature is the Pace’s ability to track your sleep and present detailed data about your deep and light sleep. In order to activate the tracker, you don’t need to press any button, as the watch will realize when you’ve fallen asleep by the lack of activity, and will start tracking data that will be presented to you when you wake up. Speaking of waking up, the Pace also has a silent alarm feature, which vibrates in order to wake you up without waking everyone around you.

Okay, that’s that for the fitness tracker part, but how well does it carry out activities expected from a smartwatch? Good enough to be considered a fierce competitor against the other watches on the market, as the Amazfit Pace has just about everything you’d look for in a modern smartwatch. The watch is able to connect to headphones via Bluetooth and play music without being tethered to a smartphone, by playing songs directly from its internal storage. As with other smartwatches, users are able to connect the Pace to their smartphones in order to receive notifications for things such as calls, weather forecasts, alarms, messages and more directly on their wrists.

Pretty much everyone needs to take a second look in order to realize that the Amazfit Pace is actually a smartwatch, as it manages to blend in as a regular watch quite well. Whether or not you like it, the Pace gives up on the standard futuristic design that is quite common and instead opts for a sleek and minimalistic design that’s clean and guaranteed to look good alongside any attire.

The device has a dark ceramic bezel that is resistant to scratching, which features a small button on the top-right edge that acts as the home button. Strangely enough, the touchscreen cannot be used until the button is pressed, presumably as a way to protect users from accidental swiping during intense physical activity and to increase the battery life, as the screen doesn’t have to be always-on. However well-intended this design decision was, it may lead to a lot of frustration when trying to use the smartwatch, which is no good thing, as smartwatches are supposed to be easy to use.

On the bright side, the watch does have an IP67 water and dust resistance rating, which means that users will be able to swim without taking the smartwatch off their wrists. Another good call on the design part are the high-quality rubber straps that come included with the device.

As for the display, the Pace features a 1.34-inch transflective color circular LCD display that runs at 320×300 resolution and offers a good enough quality, especially when compared to the other affordable smartwatches on the market. There are 13 watch faces to choose from, each one representing a different style. Additionally, users can upload their own pictures to use as watch faces.

For its asking price, the specifications of the Amazfit Pace are nothing to scoff at. With 4GB of internal storage that’s perfect for taking your music collection on the run, 512MB of RAM, a 1.2GHz Core processor and a 280mAh battery that is supposed to last 5 days while using the GPS and activity tracking and 11 days without, the watch presents a great value for its asking price. 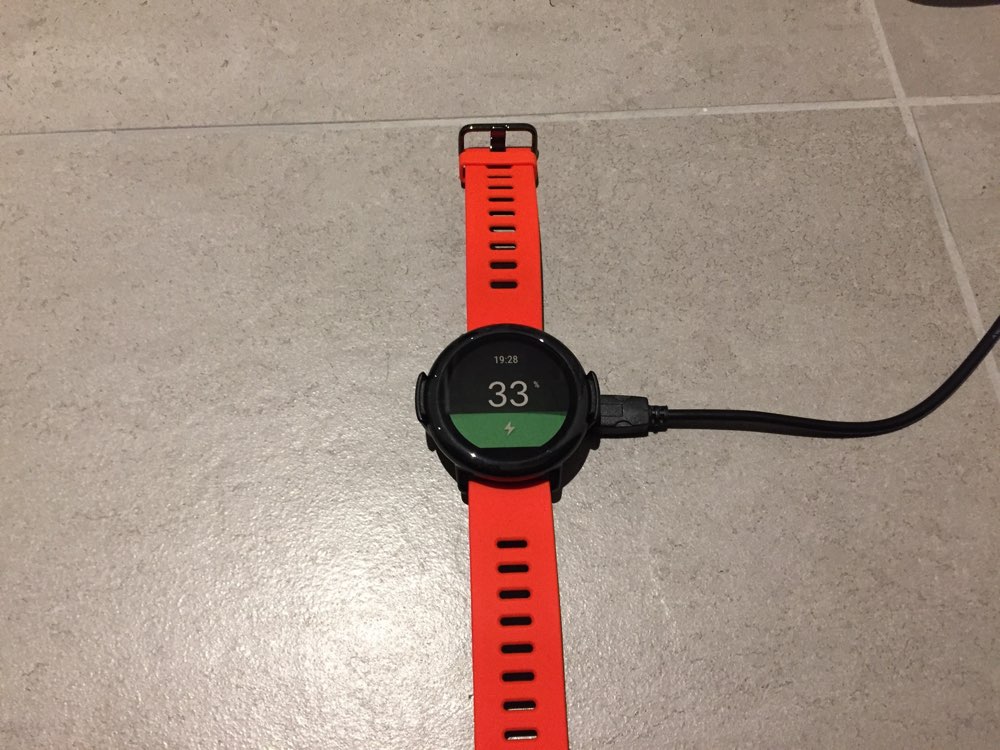 The Amazfit Pace can be quickly and easily charged with a standard Mini-USB cable.

One downside of the Amazfit Pace is the fact that while it runs on a version of Android, it doesn’t run on Android Wear, while pretty much every other smartwatch on the market currently runs on a version of Android Wear. This not only leads to an incompatibility with apps but also highlights some of the problems with the custom software that’s loaded on the watch, such as slow transition animations.

Another problem is that while there is an official companion app available for Android and iOS devices, the app doesn’t do a whole lot of things. While other companion apps are able to track workouts, set alarms and the likes, the Amazfit Watch app only enables users to change their watch faces, change notification settings and disable certain apps. Theoretically, you can sync workouts using the app, but only if you use Strava.

All in all, the Amazfit Pace is a great device that puts a large emphasis on running and intense workouts. As amazing as that sounds for people looking for a smartwatch and fitness tracker hybrid, that emphasis comes at the price of certain features being lacking. However, if you’re looking for an affordable smartwatch that is able to replace your current fitness tracker, then the Amazfit Pace is a perfect fit. The device costs only $160 and is available for purchase from multiple websites and retailers.

If you’re looking for an affordable smartwatch that is able to replace your current fitness tracker, then the Amazfit Pace is a perfect fit.