We recently sat down with ARROUND CEO, Neil Bryant, to have a chat with him about the project as well as learning more about his thoughts and insights.

So, can you tell us a little about yourself, and what makes ARROUND stand out?

My name is Neil Bryant, and I’m the CEO of ARROUND. My background is in marketing and user growth for large internet projects. I spent five years helping to grow Badoo.com, then moved to SD Ventures where I ran a set of social platforms with a revenue of over $150 million per year. I’m especially excited about augmented reality (AR) because it’s such a new space, it’s growing so quickly and also because the actual technology is just so amazing to use.

With ARROUND, what we’re doing is creating a decentralized ecosystem for AR. The company is building a platform based on blockchain, that combines four key elements: a social network, an advertising network, a 3D Map of the world and a marketplace for developers. Each aspect is integrated into the blockchain and it’s linked by the ARR token, and together it creates an environment where any good augmented reality app can thrive. AR is a booming market segment, and we’re entering the market at just the right time.

The first phase of our social network has got elements of Twitter, WhatsApp and Instagram, but, instead, you publish your thoughts in the space around you and can control who gets to see them. Some posts can hang around for a day, others are more like a conversation or stream. You can follow all these thoughts and pictures in the air around you if you’re in the same place, like at a festival or university, or catch them on the news feed if you’re not there in person.

What’s the feedback been so far?

Testing it with friends has been brilliant, it can be lots of fun if you play with it with a good crowd. The MVP or pre-alpha release is a stripped down version of the main application. It’s going to let people try out AR for themselves and share it with their friends. The main network is being built in a way that lets us plug in new functionality, so the next phase might contain urban quests, virtual tour guides, dating or a real estate service. Wherever we see a compelling application, we can port it into ARROUND and deliver it in augmented reality. Of course, the main app will come with a wallet for holding ARR tokens.

ARROUND is also building an AR Map, using crowdsourcing. There are ARR tokens as a reward for building the map, and we’ll have ownership of the map built into the blockchain, so that when it’s used by a 3rd party, then everyone who helped build it gets a reward. We can put bounties on locations that we want mapped right away, could be a school, restaurant, bar or a Starbucks …wherever our users hang out, then we want them to map it.

The map allows us to build a better augmented reality experience, it means that the AR objects we introduce into the environment align flat on the walls and sit perfectly on top of surfaces, and that everyone in the area sees the same thing in exactly the same place. Objects further away will be more translucent and they get more vivid when they are close up. It’s like virtual reality in the real world.

We think the map, and the data we generate it from it, will potentially be an important source of demand for the ARR, our token, alongside the demand created by advertisers plus the transactions on the social network and in the marketplace. All prices on the platform are denominated in fiat currency, but transactions will be in ARR tokens.

The third part of our solution is how we commercialize our own app, and can commercialize other apps in the future. The AR Adnet can be activated in lots of ways, for example, advertisers can run campaigns triggered by the AR Camera reading some packaging, which then launches an AR experience. It’s the same technology that we can give to art galleries or museums to provide extra information about what’s on display.

I think our outstanding feature is our in-store navigation option, where users can get directions to specific products within a shop. We use the crowd-sourced 3D Map for this. Then the AR Camera recognizes the product and the consumer can be offered a discount, see more information about it or be directed to similar products. It’s a really engaging way to bring people, shops and big data together right at the decision-making process.

There are also traditional banners that can take up the side of a building, and sponsored objects in the network or available through the AR Store. There are solutions to fit any type of campaign. 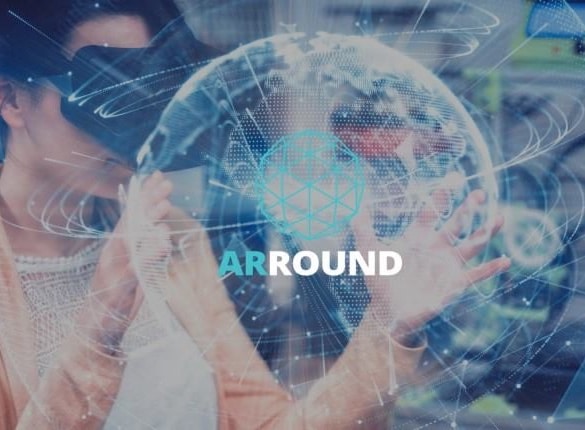 This year has become a game-changing one for mainstream adoption of augmented reality. ARROUND is a startup in the AR space that is utilizing blockchain to power an entire decentralized ecosystem. On the face of it, blockchain and AR (augmented reality) don’t necessarily seem like natural bedfellows. But dig a

Do you have any interest from advertisers yet?

Currently, we’re building two campaigns for Unilever, one for Scania and another for Campari, plus we have lots more in the pipeline. This is just for the pre-alpha version. We’ve also signed up 36.6, which is a cosmetics and pharmacy chain with over 2,000 physical locations. It’s an incredible chance for us to commercialize our AR ad system with a large partner. As a result, we think we’ll have a product that we can roll out globally.

We follow what’s happening in the hardware market very carefully of course. The next game-changing technology will be smart glasses. The current glass manufacturers such as Microsoft (Hololens), MagicLeap and ODG all have offerings at various stages of development in interesting directions. We think that wearable augmented reality glasses will be available for the mass market in 2019, and that newer models will quickly bring down the prices and increase the level of sophistication available on the consumer market.

This leads into the fourth part of our ecosystem, which is the AR Store. This is where developers and manufacturers can use our staging environment to test their hardware and augmented reality solutions. And it’s also where artists and brands can offer 3D objects for sale, rent or for free.

Why did you use blockchain?

We decided to combine all four elements of the platform with blockchain, as it seemed a natural fit for guaranteeing all the intellectual property, ad inventory and interactions, user privacy rights and map ownership. Using blockchain means that we can use the ARR as the means of payment for all transactions on the network. It also means we can motivate users with tokens, which is perfect for crowdsourcing, plus it gives advertisers another way to attract attention to themselves.

Another problem in the AR market is fragmentation. Everyone wants their own app.

How are you raising money for the project?

We’re currently running an ICO to raise funds for the development of the project. We’ve had our Pre-sale already, and sold $1 million worth of ARR tokens, hitting our target. The second phase of our sale is on right now. We’ve got a soft cap of $5 million to meet and our hardcap is set at $30 million.

That concludes our Interview with Neil Bryant