The world’s population is growing rapidly at an unprecedented rate with the number showing no signs of slowing down based on observations from experts and scientific studies.

Unfortunately, this means that populated cities will now have even more residents and for countries like Brazil or India where overpopulation is already a problem, this situation certainly complicates things further.

While there are many concerns in this aspect, one of the biggest headaches in managing cities is traffic and how its structured to make traffic flow as smoothly as possible. Traffic congestion is a recurring problem in many cities around the world which takes a huge toll economically; estimates in the US suggest that the average citizen loses 42 hours in a year to traffic which is equivalent to roughly $1,400 in lost income.

These numbers show that not only should traffic problems be solved as soon as possible, there should also be systems in place to prevent traffic congestion from happening in the first place.

Fortunately, efficient systems have been built to avoid or at least reduce the effects of traffic congestion but there remains a huge problem with it.

You can have the best traffic systems in the world but a huge part of traffic congestion are the drivers themselves and unless every car in the world is self-driving, you can never control the behavior of human drivers meaning that accidents and unexpected events will still happen regardless of how well roads are structured in cities.

Even if public transport systems like subways or buses were to be improved massively, they can only handle so many passengers before bottlenecks happen.

Thankfully, the constant advancement of technology has opened up avenues for previously improbable solutions to be implemented and one of the biggest innovations in recent times are vertical takeoff and landing vehicles (VTOLs), a technology set to tackle traffic and transportation problems head-on.

What are VTOLs and how do they help with traffic?

Since there is not much space needed to land and takeoff VTOL vehicles, this means that it could theoretically be used anywhere and since they are built differently compared to airplanes, VTOL aircraft can fly and maneuver with greater flexibility making it ideal for dense areas like cities.

All of the advantages of VTOL aircraft mentioned above makes it a perfect option for air taxis, a form of urban transport that transports passengers around like taxis but through the air instead.

Although air taxis may sound too good to be true, progress in the industry has been rapid and several cities around the world such as Dubai and Los Angeles have already begun early tests on air taxis and how it’d fit in the transportation system.

In fact, companies are already beginning to release their plans to the public with one of them being Uber; the ride-sharing company has set its sights on launching air taxis by the year 2020 through its uberAIR service.

The confidence of these companies in air taxis and the airspace industry, in general, is not surprising. Air taxis have the potential to solve traffic problems as they provide another option for passenger transport; the argument of flights being expensive is not an issue as VTOL aircraft use electric-powered motors meaning that they are significantly cheaper as they don’t use fuel like airplanes which rely on jet engines.

Traveling around in air taxis would also be attractive to passengers as they move way faster than cars and they can go to places previously inaccessible to land-based vehicles in addition to avoiding traffic jams. 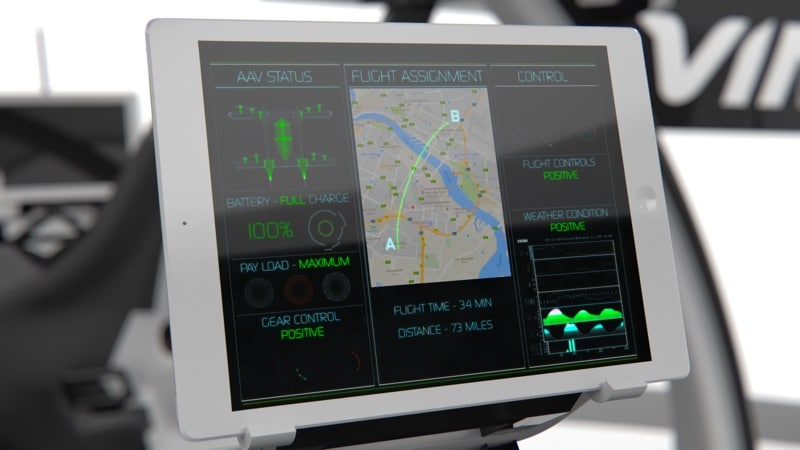 VTOL aircraft are not only limited to transporting people, they can also be used in a variety of situations including moving business supplies from one place to another or as an aerial tool for farmers to monitor and manage their crops.

Just like commercial airplanes, VTOL aircraft would require a system for these vehicles to work properly but the question is: who or what should manage the system? Air traffic control towers are already optimized for today’s flights so to leave the responsibility of managing VTOL vehicles to them would be downright impossible and impractical.

This is where VIMANA Global steps in.

What is VIMANA Global?

As mentioned in the article earlier, AAVs are air taxis or more precisely, urban transport vehicles that transport passengers through the air from one destination to another. VIMANA’s advanced technology introduces two types of AAVs, a one-seater and four-seater AAV, for passengers to embark and navigate through city landscapes smoothly. These patented AAVs are optimized for transport and also includes several features such as the ability to detect objects and weather conditions.

Aside from that, VIMANA will also provide a platform where AAVs communicate with each other in a decentralized network which means that humans and any sort of central power are out of the equation, leading to a more secure network as human errors are less than likely to happen if they happen at all.

In this platform, each AAV acts as a participant in the network; every participant will then exchange information about its flight routes with each other in peer-to-peer fashion. These AAVs then validate the flight routes of vehicles in the network which creates a secure system where every flight is verified automatically—a feature that is only possible due to the nature of the blockchain.

The advantages of VIMANA’s technology in the industry is clear; with VIMANA, passengers only need to sit back and choose their destination while the platform does it work automatically. Not only will this accelerate the adoption of air taxis, VIMANA’s technology can also be used for other cases such as allowing emergency services to move and respond quickly as well as allowing companies to move around cargo and supplies effortlessly. 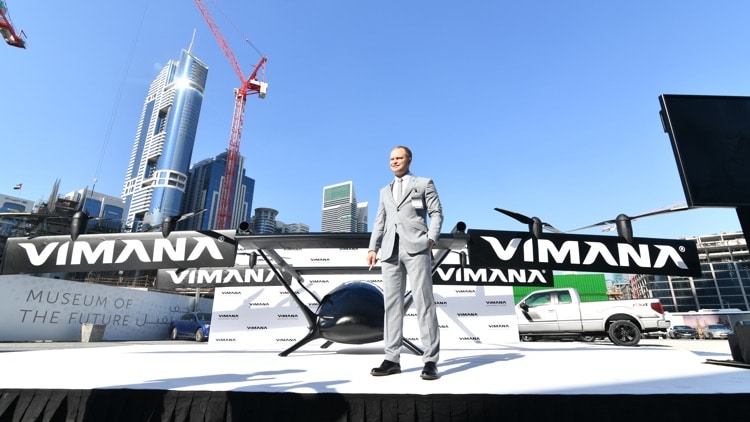 Led by the renowned and extremely experienced Evgeni Borisov (CEO and founder of Vimana) along with a list of high-profile backers, VIMANA aims to pave the way for air taxis in cities all over the globe thus establishing itself as pioneers in the blockchain airspace industry.

The company aims to demonstrate its products and technology by 2020 in selected smart cities around the world including Dubai, Tokyo, and Singapore.

More on VIMANA can be explored further on the company’s website.