BLOCKv is a blockchain-based protocol aimed at developers who want to utilize the blockchain in a wide range of projects ranging from e-commerce to retail physical products.

The startup aims to establish itself in the market as the foreleader of the virtual goods economy which is an ambitious goal but one that is achievable thanks to its experienced team.

BLOCKv does this by taking advantage of the growing blockchain sector by providing interested developers the tools needed to utilize the blockchain for goods and services as well as allowing for more revenue channels than before.

Simply put, BLOCKv is building a platform where developers can create virtual objects on the blockchain that are smart (think of IoT but in digital form) and are able to interact with each other.

BLOCKv’s prototype was first demonstrated on the Bitcoin blockchain, but what makes the project stand out is that it can work on many other blockchains like Ethereum or EOS without a hitch.

Instead of just being referred to as smart objects, there is a name for it: Virtual Atoms – also known as vAtoms.

vAtoms are a combination of code and digital elements which make it dynamic. In other words, vAtoms make objects on the blockchain come alive by literally allowing them to interact even with physical objects.

BLOCKv is even planning to move ahead with sectors like e-books and music streaming to make the experience even more seamless.

vAtoms are extremely flexible and programmable digital objects that are individual in its own way and can function in many virtual environments.

Like data, the ownership of a vAtom is confirmed via records on the blockchain which makes them have the same properties like cryptocurrencies: they are unique, verifiable and you can make transactions with them.

Because vAtoms are fully owned by individuals, you can own any virtual object just like how you own physical objects.

With the properties of the blockchain, virtual object ownership becomes even more secure as you don’t have to worry about all the risks associated with online transactions.

vAtoms work thanks to the principles of smart contracts.

Smart contracts are lines of code that execute automatically based off a contract (binding agreement) between parties.

They can be executed and enforced without the need of a third-party which aligns with the decentralized nature of the blockchain.

Smart contracts are almost always superior to traditional contract law not only in terms of executing the terms, they are also cheaper as there is no middleman in between to complicate and lengthen things.

How does the platform work?

BLOCKv is powered by an extensive list of SDKs and APIs to help run the platform. These are the foundations for viewing and also interacting vAtoms with each other in the BLOCKv platform.

The nucleus, on the other hand, is the core component that helps vAtoms act in real time. Things like notifications and real-time event listeners are being developed to integrate vAtoms with the real world.

As an example, you will be able to open an application, point your smartphone camera to a billboard, and get a specific digital item that can be exchanged for a pint or drink at your local bar.

Like many other platforms, BLOCKv will also have a marketplace and exchange where users can trade vAtoms. This ensures that there’s value which could become a form of digital currency.

Finally, the platform will have a registry where developers can create, manage, or perform other administrative matters related to vAtoms.

We will be publishing over the next 2 days an exclusive Interview with BLOCKv CEO Reeve Collins. We first met him during the World Blockchain Forum in London a few weeks ago, where he introduced his company.

We caught up with him over the last few days to discuss the upcoming ICO and more. Stay tuned. 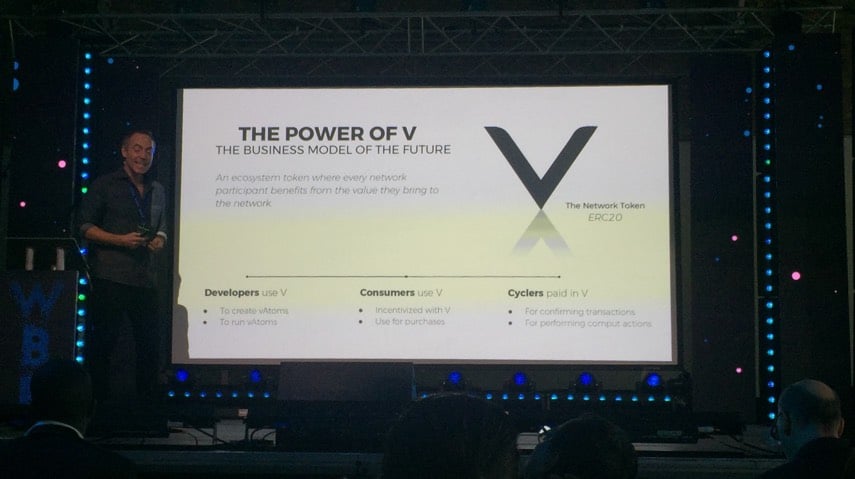 BLOCKv is launching the VEE (also referred to as V) token sale, which is an ERC20-compliant token based off the Ethereum blockchain.

BLOCKv and all of the parts of the BLOCKv platform will need V to function as they hold the ecosystem together and provide a universal token for rewards and incentives.

35% of the total V in supply will be sold during the crowdsale while the rest will be divided fairly for long-term development funds, funds for the operations of the team, as well as funds to help incentivize the development community.

The pre-sale for BLOCKv is over but there will be a public token sale on the 19th of October.

To participate in the ICO or learn more about the project, click here to head over to BLOCKv’s official homepage