Bluzelle is service-based (middleware) storage solution for the blockchain and businesses using it.

The blockchain is in the end, just a protocol similarly to how the internet is a communication protocol. Hence, there is a need for middleware applications to capitalize on these protocols instead of making things more complicated.
All of this starts off with a decentralized database network which includes two parties: producers and consumers.
Producers in the Bluzelle platform are the people who mine which is a process where a user’s computer plays a part in the transaction validation process. This is equivalent to a user renting out their hardware resources to the network.
Consumers like software developers or businesses can then use the Bluzelle network to store data for their applications.

We recently sat down with Pavel Bains, the CEO of Bluzelle to have a chat with him about the project as well as finding out his thoughts and insights.

Hi, Pavel. Thanks for joining us today. Can you tell us more about yourself and Bluzelle?

I come from a digital media and technology background. In 2014 I started reading into Bitcoin and then blockchain. From there I met my co-founder Neeraj Murarka, and we decided to start a company just to do blockchain projects. We always wanted to be a blockchain tech/infrastructure company. Throughout 2016/early 2017 we did projects for banks and insurers and through that, we discovered the need for a decentralized database – which is what we are building now.

In our case blockchain principles allows us to provide better security, scalability, and reliability. Data can be validated to be true and only accessed by the rightful owner.

Tell us about how you came up with the idea of Bluzelle. Did you face a problem within the data storage industry or do you think there is a gap in the market for Bluzelle to fill?

We built a KYC solution for three banks in Asia. It was a dApp built on Ethereum. But when we needed to store the data of the users we had to use a centralized service. We realized that was not ideal. If we had a problem, then everyone is going to have that problem with dApps. So it was an organic discovery.

What do you think is the biggest problem Bluzelle will solve and why is the problem important to solve?

Over the next 2 years, it’s estimated we’ll have 24 Billion connected devices and 4 billion connected people. That’s 6 devices per person. The data being exchanged between is massive. The current internet infrastructure is not equipped to handle that.

Now, for a question that you probably get asked a lot: What is the difference between Bluzelle and something like Storj?

The easiest answer is they store files and we store data. Think of Dropbox and Oracle. 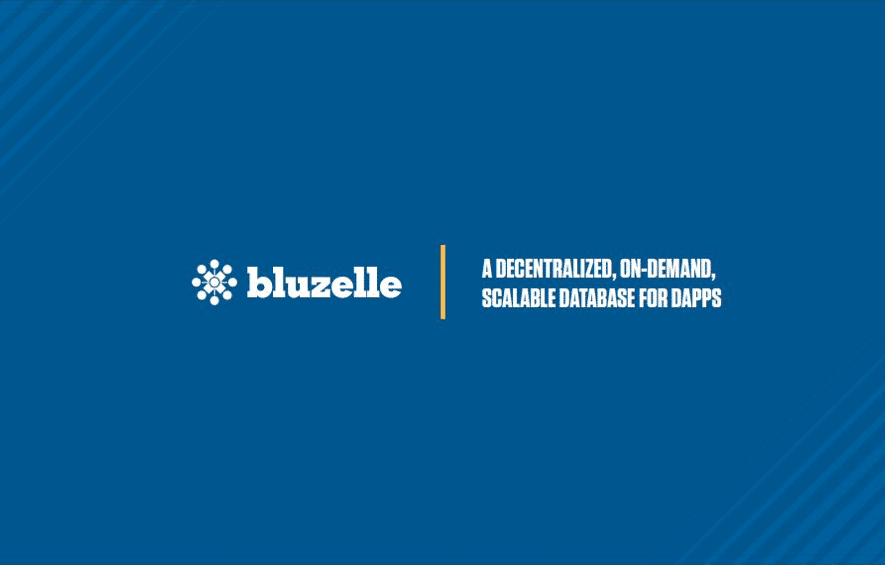 The blockchain is on course to power the next generation of the Internet. Despite being deemed as too ambitious at the start, protocols like Ethereum are starting to become platforms for launching decentralized applications (dApps) that will fundamentally change how we consume products and services. One of the characteristics of

Speaking of data storage, why did you think the idea of decentralized data storages happened so rapidly?

As Ethereum and Bitcoin began slowing down for processing transactions I think others woke up to the fact that blockchain can’t do everything – despite what the media says. After 8 years, it’s proven there is a market for crypto/decentralized products, so now everyone has realized that there are key infrastructure pieces that need to be built.

What’s wrong with current data storage services and where do you see the industry heading towards in the next few years?
The biggest thing is that they are not secure and reliable in a centralized model. That’s why you have seen so many data breaches. The traditional system will just get worse. So decentralized networks will start to take away market share.

How is sensitive and private data kept secure on Bluzelle?

For example, a user may want to keep sensitive financial information of himself (bank accounts, credit card info, etc.) but is worried about keeping it on the blockchain.
Is this something not be worried about?
Well, a Bluzelle isn’t for consumers. It’s for companies to use to store their data (which may be consumer info). Bluzelle isn’t a blockchain where people can see things. We are a protocol where the data is broken into bits, replicated and stored on thousands of individual servers around the world. Think of it like a Starbucks mug shattered into thousands of pieces and sent to thousands of physical warehouses. To put the whole mug together and see it says Starbucks, you’d have to break into thousands of different warehouses each with a different lock.

What do you think would convince enterprises and corporations to use Bluzelle instead of the databases that all of the big boys are using currently?

I think once they see all the small to midsize businesses using us and everyone happy with it, then they will be comfortable with using us. Enterprises are always late adopters.

What has been your happiest moment so far working on Bluzelle?

It’s always when we get to present to developers and the crypto community and engage firsthand. In December I got invited to an Ethereum event in Shenzhen, China which had a packed house. I got to present right before Vitalik so that was very cool. Others that day were from OmiseGo, Kyber and Consensys so it was a top-notch group.
On the flipside, what has been the most painful, or perhaps the most regretful decision you’ve made with Bluzelle?
My CTO approached me with this idea in October 2016. At that time I thought it was too early and the community wasn’t ready. It wasn’t until we did the KYC project in spring 2017 that we acted. If we had acted then we’d be further ahead.

Is the Bluzelle platform already working with notable businesses or firms? Are there any future partnerships in process?

We’re still in development but have a number of collaborations in the works that we will announce next week.

Tell us more about why Bluzelle has two tokens, BLZ and BNT. What’s the difference between these two tokens and how do they work together in the Bluzelle ecosystem?

It’s actually simple. BLZ is the ERC-20 token for people to easily buy. But because Ethereum takes long to process transactions, our users cannot have that delay to retrieve their data. So they enter our network with BLZ, which gets traded to the internal token (BNT) which is used for the services. This way there is no lag for processing when people need to retrieve and store their data.

What do you think is the biggest challenge or obstacle Bluzelle will face? How do you plan to tackle that challenge?

Right now it’s building up our developer network to work on our open-source code, and the producer network to offer their hardware as storage. We are working with groups and individuals that have launched large open-source communities to build ours.

Well we are in the middle of the token sale process so it’s a little crazier.

7:30AM : be at my office desk and answer first batch of emails and plan the day.

8:30AM to 1130 AM : catch up with all the teams and people we are working with (development, marketing, PR, advisors, etc)

Then often there calls to do after 9PM to 1AM depending on time zones. Crypto is 24 hours right now and you need to accommodate interviews, business deals, financings etc whenever possible.
So depending on what time the last call is, that’s when you get some sleep. Hopefully, this all changes next month.

Right now a lot of new people are entering the space to partake in coins. I’m afraid they aren’t educating themselves about all the security risks and are opening themselves up to fall for scams. The industry has to take a leadership role in educating the people.

Mine has always been pretty simple. Be able to have a nice place in Barcelona to chill out at for a number of months a year. They have a very cool design, food, and lifestyle.
For achievement’s it would be good to get into a position where I can partake in solving some of our bigger global problems. I read Abundance and BOLD by Peter Diamandis and know that it can be done.

That concludes our Interview with Pavel Bains

We’ll be scheduling even more exclusive interviews like this in the coming weeks to delve into the minds of what makes a blockchain startup tick as well asking the questions you want to know the most.
To make sure you don’t miss out on our exclusive interviews, go ahead and sign-up to our mailing list and subscribe to our social media channels.
Get in touch to let us know who you want us to interview as well as the questions you want us to ask. You’ll get notifications on the latest exclusive articles as soon as they appear on our website – we won’t and will never spam you.