The fiat banking system has served us well but it can’t be denied that change is severely needed in the industry.

The lack of liquidity, transparency, and accountability in traditional financial institutions are just a list of problems plaguing the industry which in turn, hinders the market from reaching its true potential as customers are given below-par services.

One blockchain startup aims to be the frontrunner in this change.

CommerceBlock is the world’s first platform that for enables trades all across the world in a secure, private, and efficient manner on public blockchains.

This is achieved by moving all assets and trades to a public blockchain, where transparency is second to none and intermediaries who do nothing but negatively affect processes are removed completely.

Unlike many current ICOs, CommerceBlock already has a working privacy-centric invoicing system used by OTC customers that demonstrates the technology. Further partnerships with customers like HiP.property and CG Blockchain will provide a positive and immediate weight to the CommerceBlock network.

CommerceBlock can best be described as the platform that democratizes finance (in a good way).

They do this offering a suite of services which are easy to use and versatile in ways that even small businesses can benefit from. Thus, CommerceBlock positions itself to become the platform of choice for future commerce—a telling sign of the platform’s potential and capabilities.

So, how do they actually do this?

First of all, CommerceBlock provides tools such as the ability to create smart contracts, launch tokens, place derivatives on-chain, and other features to help businesses and companies get on the blockchain.

A big feature of CommerceBlock is the complete removal of intermediaries involved in processes. This brings nothing but benefits to companies such as increased revenue and lower process fees (which were not supposed to be there in the first place).

Other than that, users can expect a fully-fledged escrow service, trade flow management, asset issuance, dispute resolution, currency hedging, as well as analytical tools which are necessary for modern business practices.

The platform will also feature the usage of the Lightning Network, which enables nearly infinite transactions on the blockchain without the need of broadcasting it.

CommerceBlock is essentially providing services to bridge the private and public blockchain for businesses; the platform also maximizes security by running federated ‘sidechains.’

This means that businesses who want to keep their information private no longer have to go through the tedious process of creating a private blockchain to store their data.

With all of the features mentioned above, the best benefits of the blockchain can be enjoyed by both companies and businesses onboard the CommerceBlock platform without any problems or complicated processes. 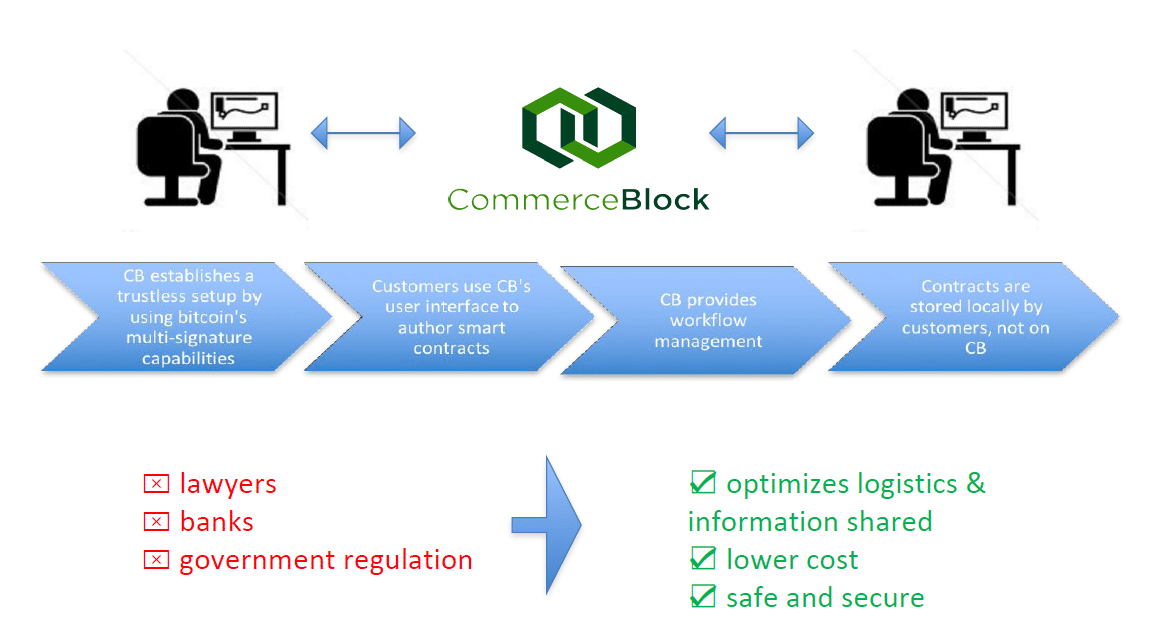 CommerceBlock is also the first ICO to introduce a BIP, the BIP175 Pay-to-Contract protocol.

The BIP175 protocol is a technology that certifies the validity of invoices and contracts as well as determining if the respective amounts have been paid; this is done by providing cryptographic proof to parties in a contract that includes details such as the flow of payments and the total amount to be paid.

Aside from that, the BIP175 protocol also provides the ability to store private data on public blockchains.

A unique aspect of CommerceBlock is the peer-reviewed nature of the platform.

Services and products offered on the platform are peer-reviewed first by experts and open source communities before they are launched on CommerceBlock, showing that the platform is truly focused on its promises of decentralization.

Aside from having a strong development team, CommerceBlock was also recently backed by Global Advisor and CoinShares, with the former being one of Europe’s largest crypto-funds.

The chairman of Global Advisors, Daniel Masters, is also an advisor to CommerceBlock along with Peter Bergstrom and Mason Border, all significant names in the blockchain and cryptocurrency industry.

These firms are working on exciting plans with CommerceBlock as they plan to use the platform’s offerings to scale and build their infrastructure on top of their own sidechains, making CommerceBlock a hidden gem among the wave of ICOs this year.

Thanks to CommerceBlock’s federated sidechains, users enjoy the benefit of virtually having all types of assets be traded and collateralized seamlessly, as all financial transactions and applications can be run more efficiently on CommerceBlock.

Some services that you can access on the platform include:

CommerceBlock understands that while the transparency of data may be a good thing, not many businesses would want their sensitive data to be posted on the public blockchain for everyone to see.

Hence, CommerceBlock has developed a unique protocol that only allows sensitive trade details and customer funds to be managed client-side; no one else can access them except for clients themselves.

Sensitive data are also kept secure and private on CommerceBlock’s blockchain (which is one of the most secure blockchains to be created, ever).

Features of the CommerceBlock platform

Streamlining trade flows is one of CommerceBlock’s goals which is why it provides pre-made trade flow templates to clients for a fair fee.

For enterprise customers, CommerceBlock provides custom solutions and pricing structures for their needs although they are free to use the APIs and SDKs mentioned above.

CommerceBlock prioritizes third-party integrations to make it as easy as possible for current solutions to utilize the platform’s services.

Ledger wallets (a popular brand of hardware cryptocurrency wallets) can be easily integrated into CommerceBlock by developers, for instance.

As mentioned earlier, CommerceBlock takes transparency and open standards to the next level by ensuring that all products and offerings are peer-reviewed first before they even have a chance of appearing on the platform.

Here are the details of the CBT (the platform’s official utility token) token sale: