As cryptocurrency is slowly making its way into our day to day life, so is hackers’ activity. 2017 saw a big spike in scams and hacks of cryptocurrency exchanges and investor wallets.

No wonder, over the recent year or two, security concerns have been on the rise as well. Cryptocurrency investors and enthusiasts alike are arming themselves with a variety of security solutions. Some are turning to hardware wallets. While a very good option, it may not be palatable for some users’ wallets. If you are among the latter, you may be interested in using a Virtual Private Network (VPN) service to strengthen your security and anonymity in the cryptocurrency world (and beyond).

What VPNs do for our privacy and what they don’t

If you’re not familiar with it, a VPN is a service offered by a third party company that masks the user’s IP and establishes an anonymous connection for them. In order to protect your privacy, VPNs use so-called “tunneling” – an encrypted connection between the VPN server and your device. In this, VPNs are using a different IP address (your device’s address on the Web), not your real address. This is what essentially masks your identity and location because your IP can reveal your Internet provider, region, even exact physical location.

Frequently confused, VPNs are not antivirus software, as it doesn’t detect viruses nor attacks. But a good antivirus should always be used in tandem with them.

Good VPNs are paid subscription services. While some free services exist, their efficiency is questionable (they rarely even use 256-bit protection, the industry standard) and they should be avoided by anyone seriously concerned about security.

Since VPNs hide an internet user’s identity, it makes them very useful for activists and all kinds of protesters and all the regular folk who need to keep their online activities private. That’s why many whistleblowers, protest and other activist groups have been known to use VPNs for their own protection.

In this post, though, we’ll focus on two areas of use of VPNs: Blockchain privacy and bypassing geo-blocking.

A continued growth in the digital currency market just makes stealing bitcoins that much more appealing to criminals, particularly when most private users have little or no security measures installed on their devices.

Paired the partial anonymity of a blockchain with a VPN allows users a much higher level of security. The ability of VPN to mask the IP and thus the location of the user means we can trade and make purchases with our cryptocurrency assets without worrying about revealing our identity.

But the real value of virtual private networks comes in protecting us during accessing public Wi-Fi. If you’re using an unencrypted connection, hackers could launch a “man-the-middle attack” and steal what you could be transmitting to what you think is a trustworthy source.

One scenario could be: You are accessing your Bitcoin wallet in public which may allow hackers to use a “sniffing” program to identify you and intercept your insecure connection. If a hacker intercepts your wallet ID codes you sent over a compromised network, the next step is acquiring your public code, which isn’t all that difficult for an experienced hacker.

To be safe on these networks it pays using an encrypted connection VPNs offer.

Choosing the right VPN is an essential step. To further solidify your anonymity on blockchain, you may want to avoid VPNs that keep logs of user activity. This is especially important if your VPN is registered in one of the countries that willingly or per lawful request submit their records to the government. Do your research before opting for any particular service. If you need a suggestion, check out Best Online Reviews where folks have done the heavy lifting for us and collected a big number of good VPN options.

Note that some websites and servers can detect VPN use. To fight this, use a polyserver approach: Rather than using only one VPN provider or server, you can alternate with lower-profile VPN services or change to different server IPs within the same provider. Cycling your IP address regularly can help bypass such VPN detection. 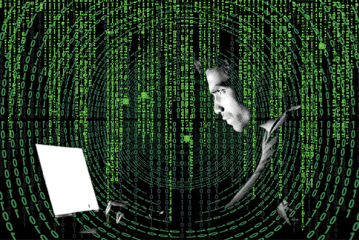 Since blockchain, as you know, is a decentralized digital ledger that is not maintained by any central authority, it is almost impossible to tamper with or fabricate blockchain data – not even governments can do this. Which is particularly welcome with all the current government surveillance.

However, the same capabilities that make blockchain so appealing to us also make some governments very uneasy about it. Hence several countries have banned cryptocurrencies, while a few others have issued a range of strict regulations.

If you are from one of those countries, participating in the cryptocurrency market is rather restricted for you. Fortunately, one of the more common methods of enforcing these regulations, geoIP (also geo-blocking), can be circumvented with VPNs. Geo-blocking is a way to restrict access to content from certain regions based on IP addresses of the users.

VPNs assigns the user’s device a new IP address, rendering their actual IP address effectively invisible. Since for this new IP address, users can choose a region with no cryptocurrency bans, they can effectively bypass geoIP bans. Government servers see you as a foreign citizen.

VPNs come in handy not only to citizens of such countries but also to users who travel to a region with such ban – they can then use a VPN to access a certain website through their home region.

Keep in mind, however, using VPNs to bypass geo-blocking is a grey area in some regions and a few countries and US states have introduced regulations for it. For example, China has announced in January a formal ban on the unapproved use of VPNs within its borders, where VPNs have been a method of bypassing existing blocks on many social networks and foreign news sites.