The gaming industry is estimated to have over a billion players every day on both mobile and desktop systems.

Reflecting the increasing player growth is the immense amount of profits generated by the gaming industry, with the industry being valued at $100 billion last year and is expected to cross the $150 billion mark by 2020.

A notable portion of this figure is in-game trading, which is estimated to have generated roughly $4 billion in total sales, an astonishing figure considering these are just virtual items.

The problem with in-game trading is its accessibility.

Researchers believe that less than 10% of gamers trade in-game while the others are restricted due to lack of funds, geographical limitations, or are unaware of it.

For the non-gamers, you may be perplexed at how a digital item can be estimated at such as high valuation.

In a nutshell, games (usually multiplayer ones) allow players to collect virtual goods, such as fancy armor or rare pieces of clothing or items in-game.

While these virtual assets are useless outside of the game, rare or exclusive items can sell for thousands easily with some items costing 6-figures. 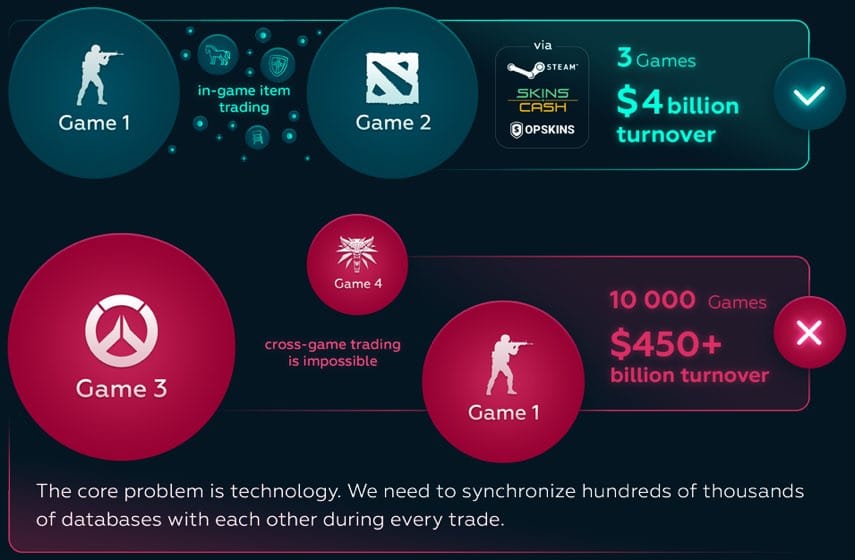 A bottleneck with trading these items, however, is the lack of a proper structure in place to allow these trades to happen globally and securely at the same time.

Another problem with in-game items is that they are exclusively bound to their own games. A rare item in Runescape, for example, cannot be traded easily with another similarly rare item in DOTA because they are completely different games.

The most popular virtual items marketplace today is Steam’s Marketplace, a platform where gamers can buy or sell in-game items and regarded as the leader of digital trading.

One of the biggest problems with item trading in platforms like this, however, is the obscene amount of fees attached to it, partly due to monopolies in the market like Steam.

On the Steam marketplace, for example, Valve takes away 5% of transactions for items traded regardless of how cheap or expensive it is.

This does not include the in-game fee which is usually about 8-10% of the item’s value.

Because of this, sellers get 80% of what they sold, that is if they’re fortunate enough to have the lowest of fees in their trades.

That’s where DMarket comes in; DMarket is a decentralized virtual assets marketplace where traders can buy or sell in games items easily without the excessive fees of today’s marketplace practices.

What makes the marketplace special is its ability to trade across every game even if it’s not semi-related.

For example, if you want to trade a valuable item in DOTA for a Diablo 2 item, you would need complicated trading steps previously but DMarket allows you to do that quickly in an easy-to-use app.

To make the process even easier, DMarket also enables API tools for every game developer to integrate their in-game trading process with the marketplace – even indie developers are allowed!

The platform will utilize the blockchain by using smart contracts to allow for one-click trading and exchange.

With smart contracts, the need for third-parties are avoided and users get to trade without worrying about shady practices or “flakes” (last-minute trade cancels).

The terms of a smart contract also execute automatically so when a trade is agreed, everything agreed previously by the buyer and seller will be executed – leaving no room for scams.

The vision of the entire project is also to develop an economic system between games that do not necessarily need to be the same genre or series; think of it as the foreign trade market of video games.

What are the features of DMarket?

DMarket will be powered by the ERC-20 token called the DMarket token.

The Dmarket token will be the official currency used for all transactions in the DMarket platform which includes purchases, sales, and payouts.

Besides trading, the DMarket token will also function as:

To maintain the value of the tokens, DMarket tokens will be supplied in limited amounts to prevent inflation and excess supply. 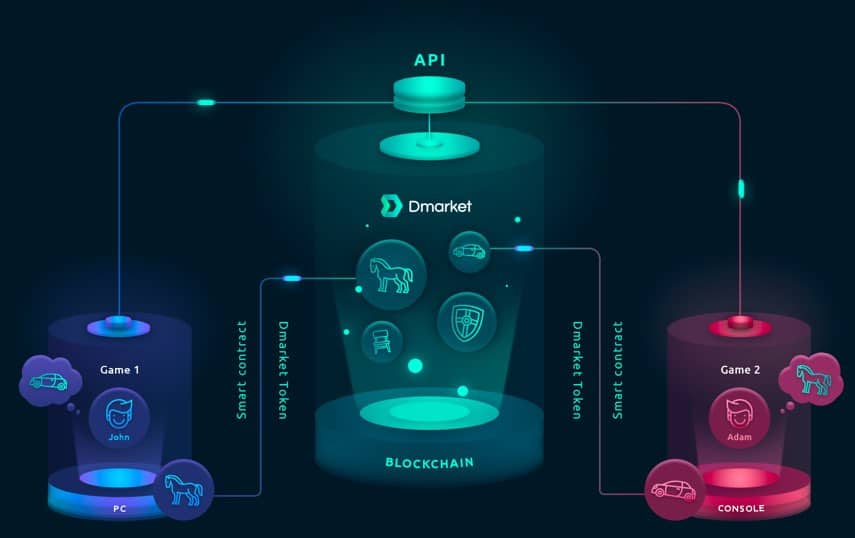 In addition to launching the platform on iOS and Android devices, DMarket empowers developers with the following benefits:

In addition to offering a bounty program and incentives for developers, up to 18% of the funds raised in the DMarket token sale will be used to incentivize developers who want to participate in the platform.

The team running DMarket is also made up of several famous names in the gaming industry.

Leading the helm is Volodymyr Panchenko and his co-founder, Alexander “ZeroGravity“ Kokhanovskyy. (Check back next week for our exclusive Interview with Volodomyr)

Aside from building a successful global game distribution company, Volodymyr is also the founder of Skins.Cash, the second biggest virtual items marketplace with revenue in the millions.

As for Alexander (nicknamed ZeroGravity in the eSports scene), he is the founder of Natus Vincere (Na’Vi), one of the most well-known names in the eSports industry with a massive fanbase and huge success in games like DOTA or CS:GO.

He is also a shareholder of ESForce, an eSports investment company with several famous brands under its wing like SK.Gaming and Virtus.Pro.

Finally, leading the blockchain team is Andrey Khavryuchenko, the main developer of DASH Coin, a stable and popular altcoin with Sergey Nemesh as the CTO.

This star-studded team shows that the team is more than capable of handling a project of such scale in the gaming and virtual assets trading industry.

The pre-sale starts on the 30th of October with a minimum investment of 166.666 ETH.

The main phase of the DMarket token sale will begin on the 3rd of November and will continue through November 17 or until the target funding is reached.

No further DMarket tokens will be released after the sale.

The exchange rate will be 1 ETH = 750 DMarket tokens with a minimum investment amount of 0.1 ETH.

To participate in the token sale or learn more about the project, click here to head over to DMarket’s homepage.