There is some bitter competition between the top tech companies, especially Google and IBM, to see which organization will be the first to deliver the first universal quantum computer that promises to be millions of times faster than any computer chips available today.

The new technology will transform the world radically because it will make it possible to create simulations at the atomic level.

This is the technology that many scientists, big businesses, and entrepreneurs expect to provide a quantum leap into the future.

The pioneer organization that hits the market first is also likely to enjoy amazing profits owing to the possibilities of quantum technology, which is perhaps why companies are collaborating with universities to accelerate the development of quantum chips.

. What is quantum computing?

According to Rainer Blatt a physicist and quantum expert in Austria, the “century of quantum technology” will revolutionize the economy and society, and scientists have only begun to understand the impact of this “revolution of possibilities”.

It is understandable that non-physicists may find it hard to comprehend the implications of this leap. So, here is a description of quantum computing:

A quantum chip comprises superconducting metals (IBM uses niobium) that require quantum suitable algorithms and benefit from the superposition phenomenon: standard chips comprise transistors in either on or off position (1 or 0), while the quantum chip exhibits both states at the same time. This is just one of the strengths of a quantum chip.

The smallest unit into which computer data is broken down is called a bit that can be either a “1” for on or “0” for off. The computational power of a classic or normal computer depends on the number of binary transistors (minute power switches) contained within its microprocessor.

To bring some meaning to these numbers: the first Intel processor created in 1971 had 2,300 transistors. Today, Intel produces microprocessors with over 5 billion transistors for the fastest processing available with classical computers today.

But with quantum computers, the bits or qubits offer more options because of the uncertainty of their physical state.

It is this mysterious aspect of quantum physics that introduces the concept of superposition, where qubits can be 0 or 1, or 0 and 1, as opposed to classical computers that can only be either 0 or 1.

This translates to some inconceivably large numbers and mind-boggling working concepts if a quantum computer can have the same bits as the 1971 Intel processor – leave alone the modern ones.

The quantum processor developed by IBM operates at nearly Absolute Zero (-273 degrees Celsius), kept within a white cylinder that is cooled by a helium pump.

It is like a large refrigerator operating in a vacuum. The chip is positioned at the middle of the cylinder with measuring instruments and displays all around it and needs a skilled technician to operate it.

This chip has to be in this super-cooled environment to maintain the coherent quantum activity of superposition and entanglement. 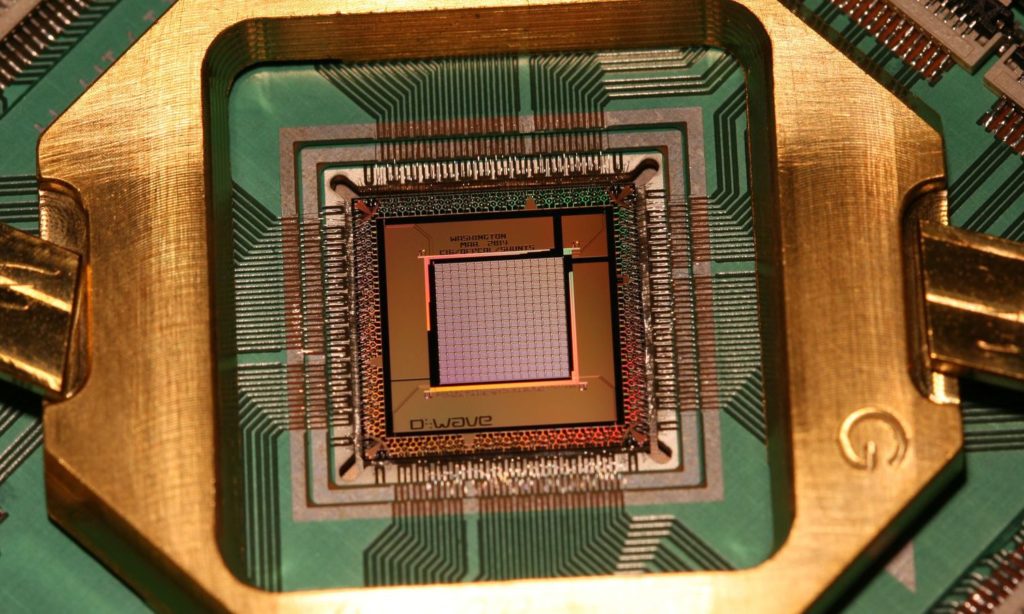 The qubits are connected by quantum mechanics irrespective of their position in space. Any heat or light that penetrates this space could interfere with process and effectiveness of the computer.

It is interesting that quantum physics has to adhere to fiction-like rules for it to succeed.

At this level, it is only capable of performing simple tasks, which is still a major step according to Jerry Chow, a Yale graduate and senior scientist leading one of the major research groups at IBM.

IBMs supercomputer project is expected to not only advance artificial intelligence but also mark the advent of a new era in information technology.

Every year, IBM invests millions of dollars in new technology, most of which is directed to expanding Chow’s team to ensure that IBM releases the first marketable quantum processor.

Other tech giants, including Google, Big Blue, Intel, and Microsoft are also in the race. But perhaps Google is their biggest competitor, following their announcement in December 2015 that they had built a quantum computer that is “hundreds of millions of times” faster than standard chips.

The EU Commission also announced in May 2016 that they would be investing one billion euros in the technology under a quantum master plan.

.What to expect from quantum computing

A successful quantum computer should surpass Watson’s computing power by a million times. Increasing the processing speed of computers will have a massive effect on the economy in the following ways:

Quantum chips will not only be incredibly faster than traditional processors, but also more capable of solving complex problems due to their special properties, addressing challenges that even supercomputers like Watson cannot.

The field of application would be massive. Experts believe that a quantum computer would revolutionize the process of drug development, impact the finance sector, and facilitate the much-awaited breakthrough of artificial intelligence.

Even cryptographers believe that the quantum chip could crack encryptions that were previously considered the gold standard of IT security. Considering the complexity of a quantum code, it would physically impossible to decrypt it, making it incredibly safe.

The Chinese government has recently installed a 2,000 km long special cable between Beijing and Shanghai to allow the people to maximize on the field of quantum cryptography.

Generally, a quantum computer will be expected to perform a number of tasks, including:

Still, this does not necessarily explain how quantum computers will be useful. Indeed, they will be much faster and capable of handling more computational tasks, from searching huge amounts of data to modeling. There should be more applications that are yet to be discovered.

2. Exemption of the semiconductor industry

The semi-conductor industry will also benefit from quantum chips, bringing about the quantum age of exemption. There has been a growing need for the chip industry to produce transistors for smaller chips in order to make computers faster and more portable.

The capacity of computer chips has been growing remarkably for decades, just as predicted by Intel co-founder, Gordon Moore, back in 1965. Moore claimed that the capacity of chips would double every 1-2 years, which has been fairly true owing to the company’s innovative strength.

But the prophecy has nearly reached its physical limit considering that manufacturers are having trouble developing smaller circuits than those currently available at 14 nanometers.

The IT industry is in great need of a spurt in new growth that could become possible with quantum processors. Intel, for instance, has been struggling with its dwindling PC business, which led them to make a 50 million dollar partnership with the Technical University of Delft in fall 2015, to bring together quantum research specialists with Intel engineers.

Previously, Microsoft had formed a quantum liaison with the Dutch.

The possibilities of Quantum chips have presented companies with the opportunity to get into the technological revolution fairly early in the game.

Another company, D-Wave System, was formed as a spin-off of a local university in Burnaby, Canada, and is nearly at the same level as IBM in regard to quantum chip development.

In 2011, a private company called D-Wave claimed to have the first commercial quantum computer ever with 1,000 qubits, but it was seriously questioned by experts.

Nevertheless, the company received multiple rounds of financing that saw it raise over $160 million venture capital from, among other investors, the CIA, Goldman Sachs, and Amazon founder Jeff Bezos. 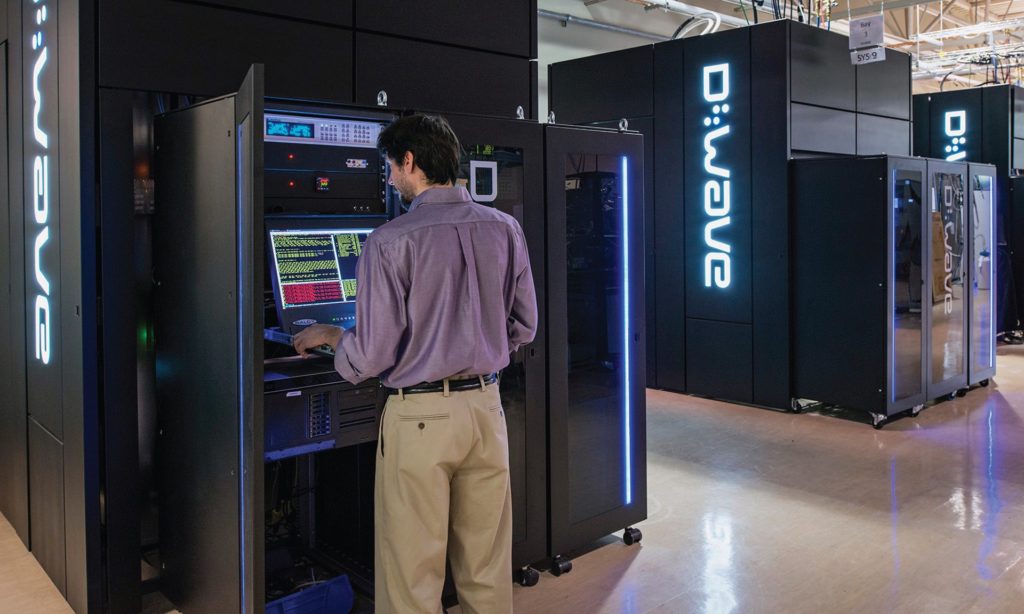 The US space agency NASA claims that D-Wave can help with the planning of its space missions by developing control software for its jets.

The success of the combat aircraft manufacturer can mean faster synchronization of millions of lines of code with more relevant scenarios. This is critical for an F-16, as the slightest error can mean a fatality.

D-Wave has not ordered an upgrade with each presentation of a new generation of chips in Burnaby. Many clients use the company’s own server park in Vancouver through the cloud.

5. Quantum annealing as a precursor

D-Waves is creating processors based on a technique known as quantum annealing or tunneling.

Compared to the intricate technologies on which other companies like Intel or IBM are based on, D-Work’s approach is quite simple with fewer tasks to arrive at a solution.

According to the lead in Processor Development, Jeremy Hilton, choosing a robust and scalable model was the best approach for the startup.

However, the D-Wave computer is not capable of simulating entire molecular chains, which is one of the most attractive features of the quantum technology.

In fact, the first demonstration by D-Wave of a 16-qubit device could only solve a Sudoku puzzle, which was quite unimpressive. This was back in 2007, and the company is now working on superfast quantum computers with more qubits.

At the very least, a quantum processor should be able to simulate realities at the atomic level, allowing physicists to test the theories of Erwin Schrodinger or Max Planck.

Quantum technology can make it possible to compute the highly intricate movement of electrons; or to design and test new drugs or materials on a screen, eliminating the costly trial-and-error process in the pharmaceutical industry.

Mark Ritter, a researcher at IBM, hopes to use quantum technology to discover a metal alloy that can transmit power without loss. Such a discovery could lead to massive savings, marking the beginning of a golden age for some industries.

Google, which has been using a D-Wave computer since 2013, recently informed NASA that they are convinced of the possibilities that the technology presents.

In 2014, Google took up John Martinis, a quantum researcher from the University of Santa Barbara, and his group to develop an in-house laboratory for artificial intelligence based on a chip that is similar to that of IBM.

From self-propelled cars, robots, to herbs that treat cancer, Google has had a range of “Moon Shots”, and now it has the quantum computer project.

The success of quantum technology would speed up the training software and machine learning while offering an unprecedented degree of realism in simulations.

For software to be able to recognize faces of street signs, it must first go through millions of sample of images to make it reasonably reliable. The more detailed an image is, the higher the flow of data.

Google researchers are confident that they will introduce the first marketable quantum computer that is superior to traditional computers in about 2-3 years.

.How much further to realizing quantum computing?

The quantum chips available today are still prone to errors, and comprise a few “quibits” – which is the smallest unit of digital information processing.

IBM is currently using eight, though it intends to increase that number to 16 qubits, and then to 50 in about a decade when they will finally be able to perform meaningful tasks.

Quantum computers will also require special software. To get developers thinking quantum in application development, the IBM group opened access to one of its computers in May 2016 via the cloud.

Chow, the leader of IBM’s research group is currently thinking of quantum computers that be controlled remotely via iPhone, or quantum optimized fertilizer that will see the global food supply grow exponentially.

It is truly an exciting time as major tech companies race to develop the first quantum computer that will be a much more hyper and smarter Watson that will, perhaps, see Chow’s visions come to fruition.

But it will take a bit of time before quantum computers can answer the questions that classical computers cannot.

An expert in all things smart tech and an incredibly intelligent writer who can explain complicated technology to a wide audience, Tania is always up to date on the latest smart tech developments.

View all articles by Tania