With over a billion gamers (both mobile and traditional gamers) playing every day, this presents a ripe opportunity for businesses to take advantage of the situation.

Other than mobile gaming, competitive gaming (also dubbed eSports) has turned from a somewhat of a joke into something necessary in many modern games, with competitions from games like DOTA or CS:GO being broadcasted by channels like ESPN or FOXSports.

The industry is expected to grow steadily by 20-25% every year which will see the eSports industry being worth more than a billion dollars by the end of this year.

This is supported by a total of 250 million viewers so far this year which is significantly more than the average yearly Super Bowl viewership.

For example, The 2017 League of Legends Worlds Championships drew nearly 50 million viewers on Twitch as well as other broadcasting channels. The International 2017 also had explosive viewership with a lucrative total prize pool of $25 million.

Despite these golden opportunities, there is no proper solution yet in place to monetize eSports. Unlike real sports, gamers are segregated across the world which makes it incredibly hard to find a monetization structure that fits everyone.

An option would be to create local networks, but that is also a tough task as gamers across the world do not necessarily have the same infrastructure of resources to host their own networks.

What is the solution to this problem?

Gizer wants to solve the problem by launching a digital platform that connects gamers, hosts and services within the eSports community.

Think of Gizer as the LinkedIn of the gaming industry; users of the platform will collaborate and connect with each other on the network which is powered by the blockchain.

Other than connecting gamers to host and services in real-time, Gizer also includes a fully-supported tournament hosting tool, a marketplace, and even managing sponsorships can all be done in one app.

The token used to power the Gizer Network is known as the Gizer Global ID (GG-ID) which allows users to be identified individually and access multiple platforms where they will gain rewards as their rank increases, obtain badges, and increase their exposure within the community.

The platform also hopes to support professional or casual gamers to join competitions and show their skills without having to travel around the world.

This will allow gamers to actually earn an income gaming without the obligations attached to it.

What is the Gizer Global ID (GG-ID)?

The GG-ID is made up of three parts: a unique avatar, a Gamertag, and gaming statistics.

What makes it special is how Gizer integrates their own token (GZR) along with the GG-ID.

The token represents a single profile item that is unknown and locked to the user. They work exactly like mystery loot crates in games where a key or something else is needed to reveal and unlock it.

The user can then unlock the tokens with GZR at any time, which results in a randomized profile item being revealed and then applied to the user’s gamer avatar.

Like loot crates, the items are classified according to a tiered system. The rarity and type of item unlocked is 100% random; there is no way for users to game the system. They will only know what they get after they unlock the tokens.

Users can also collect items to power up which allows them to gain prestige and popularity within the gaming community.

After a certain set of items is collected, users will be given bonuses such as exclusive items, permanent boosts in ranks, as well as unique badges to display on their avatar.

Other than that, the GZR token is also the currency used to perform every transaction on the Gizer network such as commissions and operating fees.

The official Gizer mobile app was launched on iOS in September while the Android version is already available on Google Play for beta testing.

The web application as well as translation to several languages are currently in progress and are expected to finish by the start of next year.

The advantages of the Gizer platform

The Gizer platform offers several distinct advantages to its users.

1.Create or join events and tournaments

With your mobile device, you can easily host tournaments for your favorite games in less than a minute.

This tournament can then be joined by your friends or other people on the network without any problems with options to enter tournaments individually or as a team. 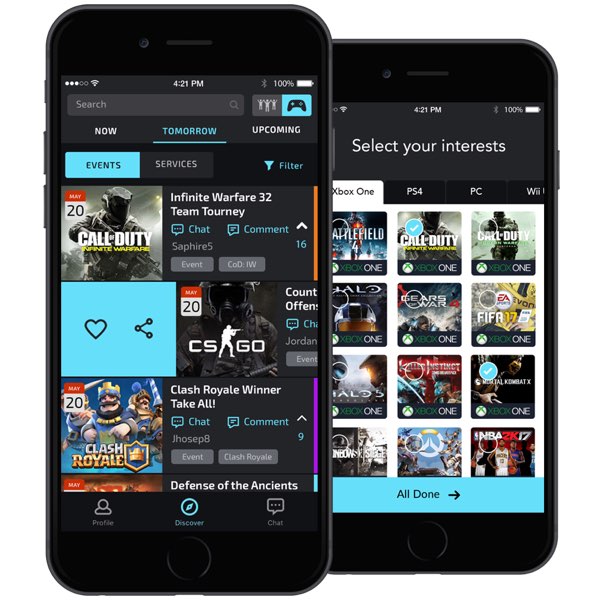 You can also quickly join online and LAN tournaments through the mobile app. If you’re a competitive gamer, this feature will be extremely useful to you.

As with all social platforms, chatting tools are a must which is why you can chat with contacts on the Gizer platform instantly – like an instant messenger app.

There is also an option for group chats where you can message both your friends and strangers!

3.Offer your services and make money

Good at something game-related and want to make money off that?

With the Gizer network, you can easily broadcast your skills and services to the platform and gain clients directly through the app.

Whether you’re good at shooters, strategies, or something else, you can offer your services on Gizer and profit.

4.Find sponsors for you and your team

Good at a game and want to take yourself to the next level?

Gizer allows businesses to sponsor teams or individuals to support their gaming career.

Previously, you’d have to already break into the scene and show some good performances to land yourself a decent sponsor.

With Gizer, you can now find sponsors easily all in one app and elevate your gaming career a step further.

5.Trade or cash out with Boost

Boost is the in-game currency for Gizer’s app.

You earn Boost by winning tournaments which can be traded for goods or cashed out which gives you serious potential of earning money from playing games.

Participating in the Gizer token sale

Gizer will launch its initial coin offering (ICO) for the GZR token, an ERC-20 token, with a funding target of $18 million.

The pre-sale is currently running via SAFT Launch with up to 20% discount, but the public ICO begins at the beginning of November.

A total of 100 million GZR tokens will be issued with 70 million being available for the token sale.

The current exchange rate is 1000 GZR per 1 ETH

To participate in the ICO or learn more about the project, click here to head over to Gizer’s official homepage