What are cryptocurrencies really worth in an environment where digital coins are all the rage?

2018 is already forecast as “The Year of Cryptocurrency.” However, even coins with no discernible service or ascernible value suddenly are gaining dramatically in market cap. The British Independent recently wrote about the sudden billion dollar market cap of a coin called dogecoin – a cryptocurrency that was started as a joke about a dog-themed internet meme.

No matter the froth and the speculation, however, cryptocurrency is clearly here to stay. And furthermore, is a total market that is clearly still on the way up. According to Forbes, there will be many other cryptocurrencies that will (at least) double in value this year. The entire cryptocurrency market cap itself grew from about $18 billion at the start of last year to one worth $650 billion by the end of 2017.

But how should an investor begin to consider where and what coin to invest in? What are such coins really “worth” in a market where straight information is hard to come by and volatility remains the only constant of the moment?

And how, in a world of global risk and uncertified and untrustworthy third parties, can valuation be given to digital currencies that will pass muster in both the cyber and more conventional worlds of finance – and financial regulation?

Volatility is not always a good thing.

Havven is a cryptocurrency project that wades right into this discussion. It is a dual-cryptocurrency system that issues what is known as a “stablecoin” to set values in the system itself – and by definition create a unit of value which is stable and constant.

The idea behind this “stablecoin” in other words, is one that creates price stability – achieved not with the backing of governments but by the financial investments of investors. Havven, in other words, aspires to create a cryptocurrency as a stable store of value and a unit of accounting.

In the old economy, as a parallel, gold and the U.S. dollar were globally recognized as having a certain worth. At one point, the worth of the dollar was pegged to the worth of gold. That is no longer the case. And in a global market, the dollar is actually not the most liquid option nor without the volatility of its own. A cryptocurrency, however, that bases its value on the dollar as a unit of accounting, or assets priced in dollars would theoretically create the same thing.

That is the idea behind Havven.

These are the specifics.

During the token sale, investors will buy havven tokens via an ETH purchase first. Although each token won’t have a determined price if the hard cap of $30m is reached, each havven token will have an average price of $0.50. Investors can choose to then escrow these havvens and issue a second currency, called nomins, which are each pegged to $1USD. However, only 20% of the havvens will be issued (in the form of nomins) to create an 80% buffer against market volatility.

When nomins are sold by the platform, they are sold for ETH which is deposited into the user’s havven wallet. Customers will buy and sell nomins as a “currency” that is backed by the inherent value of the system and valued at $1 each.

What is the Philosophy Behind Havven?

Havven connects collateral holders with those who require low volatility, enabling an incentive-based market for stability. Collateral holders are rewarded when users transact in the stablecoin, compensating them for staking the system.

Instead of a government backing the worth of paper (or fiat) money, the founders of Havven are creating a platform where transaction fees generated by the network collateralize both the system and create a stable price for their cryptocurrency asset.

The overcollateralization of the network will provide the stability of value that users desire, along with the issuance of only 20% of its “worth via the secondary, associated “transaction” token called nomins.

The value of the havven cryptocurrency will be established after the crowd sale is complete. $1,200,000 has already been raised prior to the crowd sale.

How Does Havven work in Practice?

Let’s assume Alice wants to be a part of a cryptocurrency system which has a token that is a guaranteed value (whatever that is). In this case, it is the dollar.

Alice sends 10 ETH (worth $5000) to a smart contract on the havven platform during the crowd sale. The important detail? Alice invests $5,000.

After the token sale closes, the value of the havven collateral pool will be established. Each havven will be worth 50 cents (USD).

Alice, as a result, thanks to a smart contract that executes at the end of the sale, will get 10,000 havvens (also worth USD$5,000) directly into her wallet.

These havvens are escrowed and Alice now has 1,000 nomins (worth $1) each in her wallet. 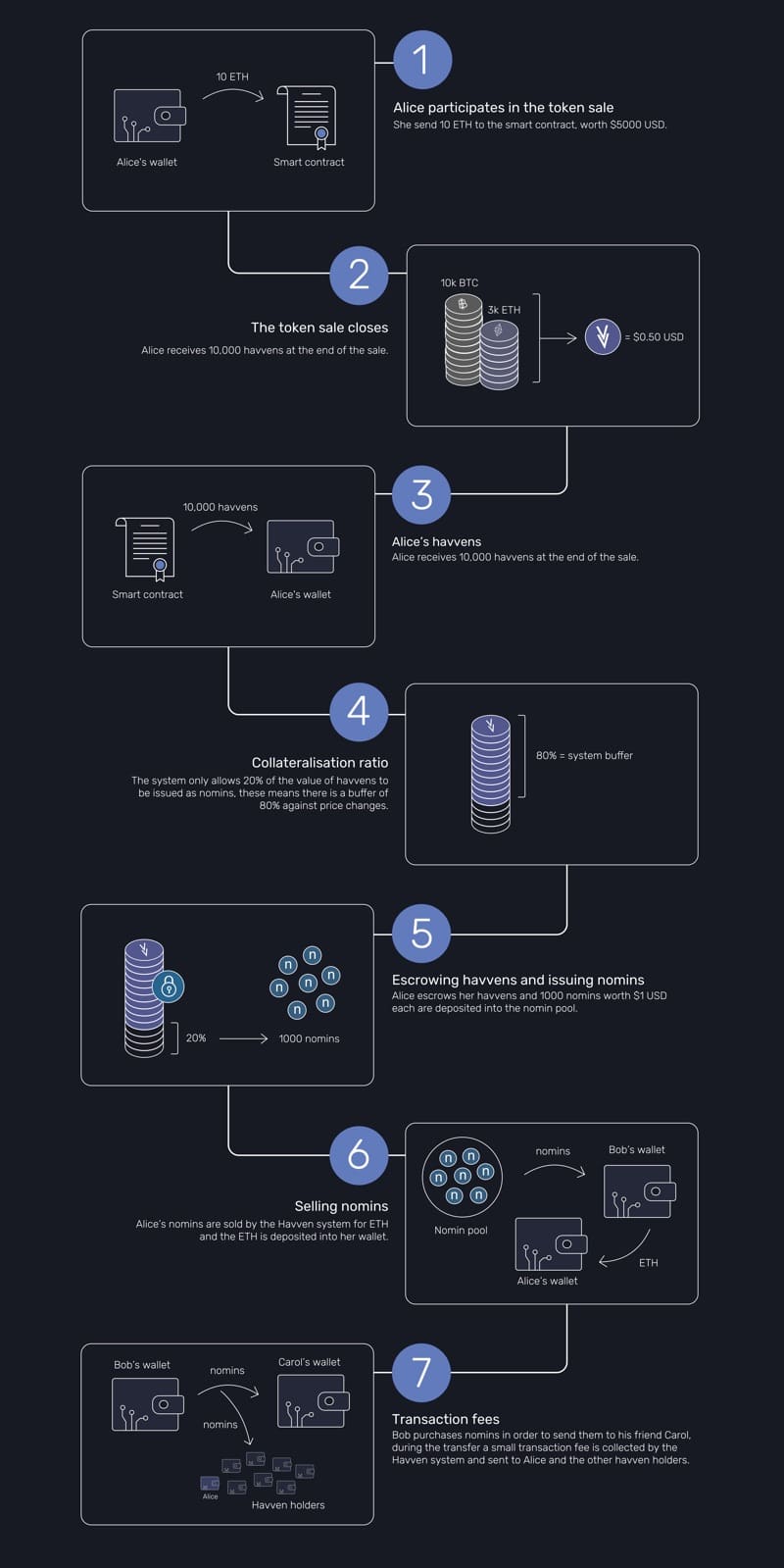 Enter the second person, Bob. Bob wants to use cryptocurrency that has a stable value, to buy something. He buys nomins to do that because they have a stable value of $1.

When he does so, Alice, along with the other havven holders, are rewarded for backing the system and guaranteeing Bob a stable price for his tokens.

Bob also sends a few nomins to his friend Carol. Other havven holders on the network also get a small piece of the associated transaction fee.

Features of the Havven Platform

The Havven platform is designed to use two forms of cryptocurrency.

The features of the platform include:

The havven: This is the “investment” cryptocurrency that users buy to become investors in the system and to associate “value” with the fund.

The nomin: Nomins are given a collateralized worth from the havven fund. They are also interchangeable with ETH tokens. Nomins function both as a stable value cryptocurrency and the currency of exchange on the network.

Over collateralized fund: The investment fund is overcapitalized to allow people to make “stability” transactions backed by a fund worth a great deal more. This allows for the stability of the coin value – even if cryptocurrencies themselves including ETH change in value.

Reward system: Nomins are sold by the Havven system for ETH. Nomins are sold for ETH. ETH is deposited in the investor’s wallet. So is a small transaction fee. Both nomin holders who buy the currency and then transact with it and havven holders are rewarded by a small piece of every nomin transaction.

Here are the details of the upcoming Havven token sale:

View all articles by Matt