Blockchained advertising applications and platforms will fundamentally change the way goods are produced, purchased, measured and valued. Why? Multiple reasons..

The first thing it can do is start to establish trust with ad buys. And in that environment, this technology could not be more overdue. Or welcomed by just about everyone. Here is why. The current environment is rampant with “bots.” Bots are hired “clickers” which artificially pump ad stats so distributors can charge higher rates. Bots like this caused companies over $7 billion in damages in 2016. Blockchain will enable companies to determine whether clicks are real or not (in other words real customers).

Not only this, but blockchain will begin to redistribute ad revenue back to other sources, namely publishers, that has been sucked away by Google, Facebook, and other social media sources. According to Forrester Research, removing such middlemen from the equation would increase their CPM literally five times – from $1 – $5. Micro currencies will allow companies to vie for actual audience attention. Not just the imprints.

But best of all? Not only will this technology allow marketers to make sure that they spend advertising dollars on actual customers with an interest in buying, but customers have more assurances that the products they actually get are the real things – not counterfeits.

Kind Ads: This Is Your Advertising On Blockchain

Kind Ads is just one of those ideas whose time has hit when the industry if not consumers are crying out for this kind of solution. It has also already raised $20 million so far. A vision of the Leadchain Foundation, Kind Ads mission is to build a better bridge between publishers, advertisers, users and of course DApp developers.

Based on its own observations of the current market, Leadchain believes that a decentralized push notification network is the way to onboard an engaged set of publishers and advertisers. So far, the foundation has found that push notifications are one of the highest converting ad formats and further has the potential to help publishers earn dramatically more income from their content while annoying users less than traditional display and pop-up ads. A pioneer in developing new digital advertising technologies, the Kind Ads ecosystem will provide the necessary tools and platform for addressing current market inefficiencies.

Key features of the ecosystem include:

Decentralized quality and reputation scores for domains and publishers: All publishers will be scored with an algorithm on the Kind Ads protocol that is based on historical campaign effectiveness and information provided by various oracles including Google Analytics. Publishers can then boost their scores through a third party stake as well as linking other trusted sources of data. Other kinds of advertisers (including off platform ones), other publishers and engaged visitors can also “back” a new publisher to improve their initial Kind Ads Score. Publishers can also use this technology to run their own campaigns to boost their scores. Advertisers can also identify high-quality publishers.

A Decentralized Network Connecting Advertisers and Publishers: No more middlemen is a powerful draw. Advertisers also have no place to go currently if they want to run direct advertising campaigns targeted to subscribers across multiple publishers. Publishers and advertisers can also find each other far more easily.

Tokenized Rewards Pool: Users will be able to specify exactly how they want their data to be used. However, they will be incentivized to share their data with publishers and advertisers via reward tokens. For example, a user would be rewarded for allowing a third party advertiser to reach them more than a user who just grants the publisher the right to market to them directly without ads.

Other benefits include a global opt-out list, daily reconciliations and payments, and the ability to use a multitude of high converting formats. Best of all, the Kind Ads ecosystem will not charge fees on ad dollars spent (in contrast to the 30% most networks charge).

How Does Kind Ads’ Platform Work? The KIND token is an ERC-20 compliant token that will allow users to opt in and out of the ads ecosystem. It will also be used for advertisers to purchase ads from publishers on the network, pay publishers on a daily basis and as a daily reward pool for all participants.

Bottom line? 85% of all ad dollars will go to publishers. The remaining amount will be allocated by the Kind Ads platform to a reward pool that benefits users and app partners.

The Team Behind The Vision

The team behind Kind Ads has a strong background in both tech and advertising. Saulo Medeiros and Rafael Mayrink, the co-founders, are also cofounders of NPBR International LTDA, an agency that helps large corporations with their digital marketing needs. Their clients currently spend over $100,000,000 a year on marketing. 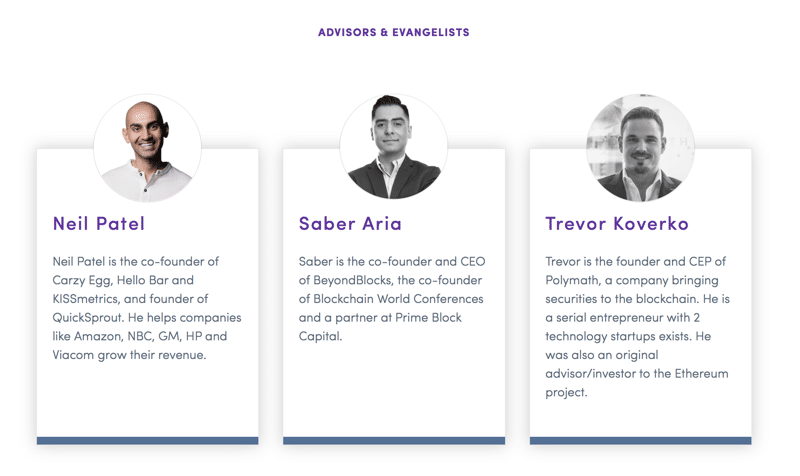 Advisers to the project include Neil Patel, founder of Crazy Egg, Hello Bar, Quicksprout, and KISSmetrics. He has a great deal of experience helping companies like Amazon, NBC, GM, HP, and Viacom grow their revenue. Saber Aria is also the co-founder of Blockchain World Conferences and a partner at Prime Block Capitol. Trevor Koverko is the founder of Polymath and an original investor in the Ethereum project.

Other advisers include the head of special projects at WordPress, Krutal Desai and Jay Westerdal, the founder of Domains Tools.

Here are the details of the upcoming Kind Ads token sale: