LiveEdu is a decentralized professional development ecosystem that teaches people how to build complete products. LiveEdu is building the YouTube for professional development. You can also describe the ecosystem as the next-generation Lynda.com. Unlike online education platforms, LiveEdu is not focused on beginners but mainly intermediates to experts. People learn on LiveEdu by watching how peers build real projects and can also download all project resources and files.

The new LiveEdu platform is set to launch in 2018 and will start with eight topics: Artificial Intelligence, Cybersecurity, Game Development, Data Science, Cryptocurrencies, Programming, Design, Augmented and Virtual Reality. Project creators in the LiveEdu ecosystem will build 10,000 projects for these topics. LiveEdu plans to also cover projects in Chinese and Russian language.

LiveEdu is an existing developed product with a monetization model and seasoned team. Dr. Michael J. Garbade leads LiveEdu as founder and CEO. The core team has worked together since the company launched: Alex Zhukov and Ilya Toka. As a young team of business guys, educators, back-end engineers, front-end developers and tech marketers with work experience from Amazon, General Electric, Photobucket, Rebate Networks, Lashou and Mail.ru, the team has extensive sector domain expertise in the education and video streaming space. 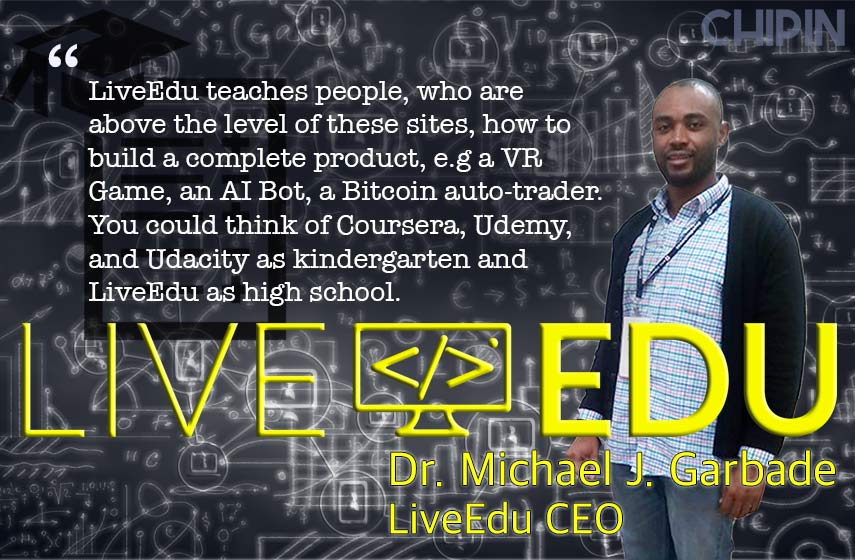 LiveEdu is a decentralized peer-to-peer project learning platform for individuals to improve their job-related skills and knowledge in future technologies. What makes LiveEdu different is that it doesn’t target the complete beginner; instead, LiveEdu focuses on individuals who already have basic skills but want to improve or learn more about

What are Education (EDU) coins used for in the network?

The LiveEdu marketplace is a classic model that is highly suitable for blockchain smart contract tokenization. The blockchain will decentralize key product development decisions that are made on both the supply and demand side. Tokenization is a key approach LiveEdu plans to use to solve its chicken-and-egg marketplace problem by incentivizing early project creators with a mix of EDU tokens and cash. Read more here.