Astronaut Capital is a service that allows investors (even small ones) to profit from cryptocurrency investments while reducing their risks as much as possible.

We caught up with Matthew Dibb, the CEO of Astronaut Capital, a while ago to talk about their ICO launch.

We recently sat down with him again in another interview to talk about how the ICO went, as well as gathering his thoughts on it.

Hi Matt. Congratulations on running your token launch! Can you let us know how you felt after the launch? Did it meet your expectations?

The token sale was a really interesting five weeks. Almost zero sleep and 10 coffees a day was pretty much my life.
In terms of expectations, we fell short of our max cap, however there we did things quite a bit different. The team spent almost no money on marketing and our bounty campaign was pretty much only limited to existing investors.
The timing of the ICO was also quite turbulent. We caught some of the Altcoin FUD as BTC was gaining a lot of traction.

Your ICO ended with less than what you expected to raise. How are you going to adapt with lesser funds and will the development plans change because of this?

Development plans aren’t changing at all. In fact, with what we raised we can quite easily achieve our goals. As a safety net, we have negotiated some of our operational costs in ASTRO so that we can stretch the ETH further and deploy it into the market.

What were some of the most valuable lessons you’ve learned while running the ICO? Can you share those with us?

I would say the first is communication. Don’t underestimate the value and importance of being completely hands-on and immersed in the everyday conversations with prospective token holders. By doing this, you can really learn their frustrations and understand what they really love about the project.
The other thing I would expand on is the need to have an active and engaged community. Most would find it really hard to keep a community interested for over a month. If you are able to embrace and engage with your community, you will have significantly more success.

What are the Top 5 Questions Astronaut have been asked during the ICO and could they have been avoided?

What is Astronaut? (I thought we did a good job at explaining this one in every material we had, but some people don’t like to read)
Is there a bounty? (We didn’t really offer or promote bounties)
Is there a minimum? (Many investors were looking to only invest a nominal amount however we didn’t show this anywhere)
Where is my bonus? (ASTRO did a discount instead of a bonus. This was a huge element of confusion)
Where is my token? (ASTRO used Orderbook which creates a new wallet for you. Also a source of confusion)

During the ICO, what were the problems you encountered which affected Astronaut? How did you overcome them?

The first one was forum trolls. There are a lot of people who signup for Reddit and telegram simply to cause havoc. Trying to deal with these people in a professional manner can be really hard.
Phishing scams was always a concern for us. On Day 2 of our ICO, there were already fake duplicate websites of Astronaut. These were straight up scams and are common for new ICOs.
A lack of bounties was also a hard one as getting support from some of the community including Bitcointalk was extremely hard. Unfortunately, the structure of our offering just didn’t quite allow it.

What do you think was the most important factor for your ICO’s success? Was it your team? The marketing? The community you’ve built?

I would say the most important is trust. This relates to both your community and your team. The benchmark in terms of transparency for ICOs is extremely low. We made it a mission to do it far better than anyone else in the market and that really paid off for us.
Being completely honest and transparent about yourself, your team and your offering is an absolute must to engage the community and build trust.

The period after the ICO is usually when startups are scrutinized the most by investors and other users. How do you plan to deal with the pressure and expectations of Astronaut after the ICO?

Maintain communication is paramount. I think the problem with a lot of ICOs is that they go quiet as soon as they raise the money. In reality, that is the time to be putting your foot on the gas and get things moving. Communication and action need to be higher than ever. Failing to do this just means uninformed and non-engaged token holders.

What was the biggest weakness or vulnerability of your ICO that can be improved should you launch another ICO next time? What could’ve been done better?

I think our contribution process was difficult. We had issues with the provider that we were using and it just wasn’t as streamlined as some of the others that we have seen. User experience in terms of contribution is a really big one in the ICO space.

After your experience, what do you think is the biggest misconception of running ICOs that you want to clarify?

I think a lot of people believe that ICOs are easy and cheap to run. This may have been the case 6 months ago, but it’s not now. Costs can stack up really quickly and things are getting more expensive by the day. The cost of actually raising capital in the ICO market is huge, particularly if you are outsourcing things like marketing, whitepapers, websites, moderation etc. Fortunately, we did all this in-house which was part of our bootstrap mentality.
I believe the vast majority of new entrants are underestimating the cost of capital.

Our main focus right now is the deployment of capital. It initially came at a really odd time due to the BTC fork, however, the Alt market is picking up substantially so the team is working hard to scope the best ICOs coming up.
In terms of development, we have several investor portfolio tools coming out soon which is really exciting. These are going to give exclusive access for token holders to research, portfolio insights and analytics.

Astronaut will be sharing their investments with their investors through their website and mobile app. Wouldn’t it be better to keep this information hidden or charge additionally for it?

Not really. We structure it in a way that ensures the information is received at a time in which taking action on it (for them personally) will not be as beneficial as it would be through the ASTRO token. For example, if we gain an allocation during the presale, we release the information at the public sale once the discount is over.
It’s this level of transparency that we stand by.

It currently seems there is an endless stream of ICO’s coming onto the market, leading to oversaturation. Where do you think things will go from here and how will it impact what Astronaut is trying to achieve?

I think fewer ICOs will be getting funded and caps will naturally lower. This is a good thing and we can already see it happening. From our side, it means more groundwork. It can be tough sometimes sifting through the opportunities as they are increasing by the day.
It does not restrict what we are trying to do, it just means we are working longer hours. 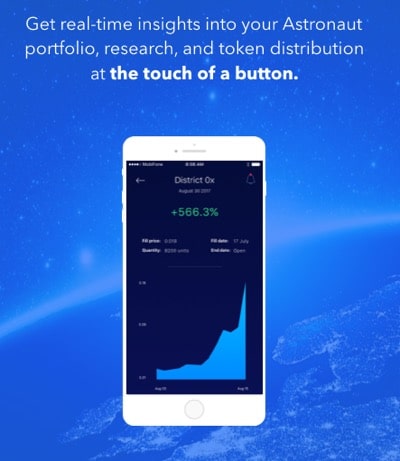 Do you see any near-future events, which will seriously endanger the Astronaut Fund?

What is a piece of advice that you would give to other startups who are planning to launch their ICOs?

Doing an ICO is not easy. I have launched several IPOs before and I can tell you that the sheer volume of investors that you have during an ICO is about 10x more.
Don’t underestimate how big of a job it is, despite how many people you have.

Any last words before we end the interview? You can say anything here; a brief comment about Astronaut, a shout-out, words of encouragement – anything works.

A quick thank you to our token holders that have supported us since Picolo Research. Without our strong community, we never would have had such a success. We are looking forward to an awesome 2018 ahead.

That wraps up our post-ICO interview with Astronaut’s CEO, Matthew Dibb.

We’ll be scheduling even more exclusive interviews like this in the coming weeks to delve into the minds of what makes a blockchain startup tick as well asking the questions you want to know the most.
To make sure you don’t miss out on our exclusive interviews, go ahead and sign-up to our mailing list and subscribe to our social media channels.
Get in touch to let us know who you want us to interview as well as the questions you want us to ask.
You’ll get notifications on the latest exclusive articles as soon as they appear on our website – we won’t and will never spam you.