It has been almost a month since the closing of Universa’s successful ICO and things couldn’t be more exciting. The project that is promising to bring blockchain technology to the practical realities of businesses is now ever closer to becoming a reality.

After much hype and interest around Universa’s innovative approach to smart contracts, not least because it counts famous tech businessman John Mcafee among its advisors, the team managed to run a slick coin offering that raised over USD$28,5 million, far outdoing its soft cap of USD$10 million. While it did not fulfill its ambitious hard cap of USD$99 million, the fantastic rise in the price of Ethereum over the last month should help to reinforce the team’s budget to move the project forward.

I am proud to become an advisor @Universa_news and build McAfee Coin on the fastest blockchain. Join the revolution/ICO today! universa.io

Universa is no small endeavor.

The team is developing its own blockchain with the intent of greatly improving the capabilities offered by the likes of the Bitcoin and Ethereum chains. For starters, the Universa ecosystem will allow for transactions over a thousand times faster than Bitcoin, at ten thousand transactions per second. That is five times faster than the traditional system used by Visa for bank transactions. According to the team, the network will require near-zero transaction costs as it does not operate with mining.

The project has rallied massive community support, now counting well over 700,000 users and growing, which gives it a great base to continue to develop its services.

The team led by founder and CEO Alexander Borodich has not sat idle over the holiday season. The self-proclaimed “workaholics” maintain weekly reports on their work and it seems like things are moving quickly.

Just a week after the ICO, Universa reportedly won the Blockchain Startup 2017 award in a ceremony in Russia. The following week, the project was awarded the 1st place at the IX Worldwide IR Case Competition. Almost simultaneously, Alpha Bank, Russia’s largest private commercial bank has agreed to integrate the Universa money transfer platform with its systems for a pilot program, in a similar way Ripple has been adopted by many banks in Asia. Also, Voskhod, Russia’s first legally approved cryptocurrency exchange has also negotiated the integration of UTN, Universa’s token, in its listings.

Universa’s Russian relationships don’t stop there either. Mr. Borodich has been in negotiations with the local leaders of the Samara region in Russia eyeing the use of the Universa blockchain in the region’s public services. Further, the team is collaborating with the Russian Association of Crypto Currency and Blockchain to develop the Cryptorouble, a state-backed cryptocurrency that could become of common use in Russia in the coming years. 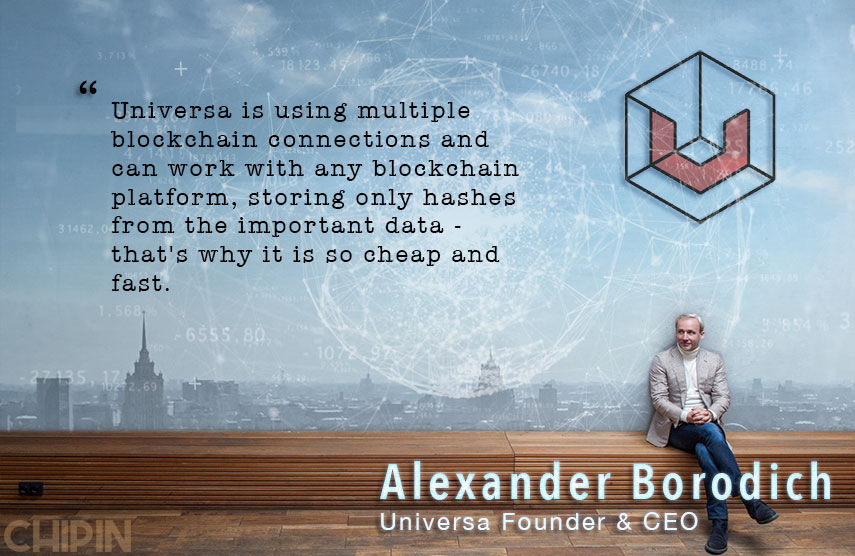 The team’s Asian division has also been working hard on building partnerships over the last couple of weeks. After holding a number of roadshows through some of China’s biggest cities, including Beijing, Shanghai, and Huchzhou, a number of partnership agreements were signed, including the intent to create a Blockchain Association and a Blockchain Academy in China.

Most importantly, a partnership penned between Beijing Kuyshu Quantum Technologies Co and Universa opens the door for the Russian startup to establish offices in Beijing. This could significantly increase the project’s exposure and outreach to established businesses. The team is reportedly also holding negotiations in Liechtenstein, Switzerland, Monaco, Belarus, the Isle of Man, and the United Arab Emirates.

Now with established offices in Moscow, Universa will open a Belarus branch by mid-January, in what can only be described as a very intense expansion strategy.

All this represents welcome news for Universa investors. The company’s expansion within Russia and in major consumer markets like China can greatly expand its user base and reinforce the hype behind the project. However, what really matters right now is the tech itself, and there have been some interesting developments there.

In Mid-December, the team started testing a new version of its blockchain on the testnet, allowing for troubleshooting and interaction with Universa’s unique approach to smart contract design (more on that below).

At the same time, the team released the first version of Unipayments, which will work as a bridge with other blockchains for currency transaction. It also released its own exchange structure, UniXchange, which will allow for the conversion of UTNP to UTN tokens. Now, this is important. Since Universa runs its own blockchain, it can operate its tokens, UTN, on its own. However, since the blockchain is not operational yet, they have designed a mirror coin which is an ERC20 token, that runs on the Ethereum blockchain. These tokens, named UTNP, will act as placeholders for the actual UTN tokens.

Two smart contracts were designed to mirror this particularity and process the burning of placeholder tokens when the investor decides to exchange one for the other. This is made possible by the Universa Reserve System, also launched last week, which serves to assure the correct distribution of tokens as well as the free conversion between UTN and UTNP. All this has become particularly relevant as Universa has just announced last week the beginning of the token distribution for investors. That is to say, Universa is evolving at neck-breaking speed.

All of these developments serve the purpose of putting together a blockchain structure that is cheaper and faster than the ones that exist today through an innovative iteration into the designing of smart contracts.

Universa is trying to accomplish this by limiting the information inscribed in the blockchain and confirmed by the nodes to the current state of the contracts and the current account balances, rather than all the transaction history in the network, as currently happens with Bitcoin, for example.

The rest of the information is stored in the Universa Secure Signed Document Service, which the team has dubbed Notary Cloud. This cloud can be called upon to verify all the transaction history and original contract. This means that the nodes in the network can perform a much quicker confirmation of the current state of transactions.

Perhaps the greatest cut the project envisions from the traditional blockchain architecture is the lack of need for mining. The Universa team has established a network of verified partners that are the de facto owners and operators of the nodes, rather than leaving it open to the public. These partners are then rewarded via transaction fees for their work, foregoing the need to mine as well as the massive electric power consumption that that practice demands.

The team’s strategy is based on the design of simple smart contracts that can interact with each other, rather than the compiling of massive contracts that try to do all at once. In that way, Universa provides a platform where users can create flexible smart contracts that can support digital assets that go beyond currencies, like car smart keys, digital passports or intellectual property documents. In this way, the platform has the potential to take blockchain technology applicability to the next level and, at the speed the team is working, that might happen sooner than expected. Stay tuned for our upcoming interview with Universa’s CEO!