The BellaBeat Leaf is a piece of smart jewelry that solves a notable (if not very first world) problem. There are many women who want to wear an all day fitness tracker, but they don’t because they do not like how most fitness trackers look. Let’s face it: everyday trackers like Fitbits and Jawbones get the job done, but they look sporty and decidedly un-feminine. Sure, they could splurge on a pricey wristlet like those in Fitbit’s Tory Burch line, but why should they have to spend extra money just to get a tracker that looks halfway decent?

And then there are trackers that are more watch-like in appearance, like those by Polar, Basis, and of course Apple, but they’re large, heavy, and overwhelming on many women’s wrists.

The BellaBeat Leaf, on the other hand, is beautiful and functional. It’s feminine, it’s stylish, and it just looks cool — plus, it’s got a full fitness tracker concealed within. It’s perhaps the most inconspicuous looking tracker on the market today. Of course, this all sounds great in theory, but how does it work in practice?

Like other everyday fitness trackers, the BellaBeat Leaf is powered by a tri-axis accelerometer. This allows it to keep tabs on the basics, like steps taken, distance traveled, and calories burned. It also tracks sleep; it will calculate total sleep duration and show you light versus deep sleep based on your body movement overnight. Users can set goals for both activity and sleep, and the Leaf will show how close those goals are to being met.

Through the BellaBeat app, you can also set an inactivity alert so you don’t sit for too long. It’s a really helpful feature for people who work desk jobs, as well as for those of us who have a tendency to get lost in a Netflix binge. There’s also a silent alarm on the Leaf that will gently vibrate to wake you up.

Because BellaBeat is a fitness tracker designed specifically for women, it includes some extras that only women will find useful. For example, the app includes a reproductive health tracker so you can keep up with your menstruation cycle, get pill reminders and ovulation alerts, learn your fertility days, and even track your pregnancy. Reminders can be set for important dates on all of these metrics.

The app also includes breathing exercises for different skill levels (beginner, intermediate, and advanced) that can help you calm down, focus, and even alleviate menstrual cramps. To do the breathing exercises effectively, though, the Leaf must be resting against your abdomen.

The Leaf is a step-based tracker, but users can add custom activities in the app to keep track of them; it’s a helpful feature if you do yoga, Pilates, or other exercises that aren’t based on the number of steps you take. There’s also some helpful encouragement on the app for a job well done. Meet your goals, and you’ll get a nice motivational message. It’s a little thing, but every bit of encouragement helps!

The Leaf is on the large size for a pendant or clip, but it’s not so big that it looks out of place. It’s just under two inches long and weighs in at 18g, or 0.64oz. It syncs via BlueTooth to your smartphone or tablet, but here’s the catch: syncing is not automatic. To manually sync your Leaf, just tap the little sync icon in the app, and your data should transfer relatively quickly. The lack of auto sync is a little annoying (especially given that many other trackers do sync automatically), but syncing on demand goes a long way in extending the Leaf’s battery life.

Speaking of, the battery on the Leaf lasts at least six months and as long as a year. It’s a button cell that’s easy to replace, thanks to the tiny screwdriver that BellaBeat includes in the Leaf box. The huge benefit of this type of power source is that you never need to remember to charge your Leaf. The device is splashproof and sweatproof, but since it’s not thoroughly waterproof, you shouldn’t wear it swimming or in the shower.

What it Won’t Do

What the BellaBeat Leaf won’t do is more or less what other trackers with similar capability won’t do. There’s no display on the Leaf, so you can’t see your progress or data without checking the app. However, it’s important to remember that it’s a piece of smart jewellery and not a full-on workout watch. You also won’t get smartphone notifications on the Leaf.

While the Leaf will track activity basics, there’s no heart rate monitor on it, nor is there onboard GPS, so it’s not ideal for more intense workouts or long distance run tracking. It’s just a good — and good looking — everyday tracker for any woman who is trying to be more in tune with her personal health and wellness.

The Leaf is a funky piece of smart jewelry made from high-quality materials. There are two versions: a stainless steel leaf shape with blonde American ashwood and a rose gold plated stainless steel leaf with African blackwood. Both are simple bordering on elegant and can be worn with almost any outfit: casual, business, or anything you’d wear to go out. And unless you know what it is, there’s no way you’d suspect that this cool leaf was a powerful fitness tracker.

The Leaf can be worn in three ways: as a necklace, as a bracelet, or as a clip. It comes with both a chain and a leather wristlet. Plus, the metal part is tight against the wood backing, so it can easily clip onto any shirt, pants, or dress as a fun accessory.

Depending on the BellaBeat Leaf you buy, you’ll spend either $120 (for the stainless steel version) or $150 (for the rose gold edition). Price wise, this is comparable to other fitness trackers of this caliber. For example, a Fitbit Flex, which does much of what the Leaf does, runs about $100, and it doesn’t look nearly as good.

The Future of Women’s Wearables? 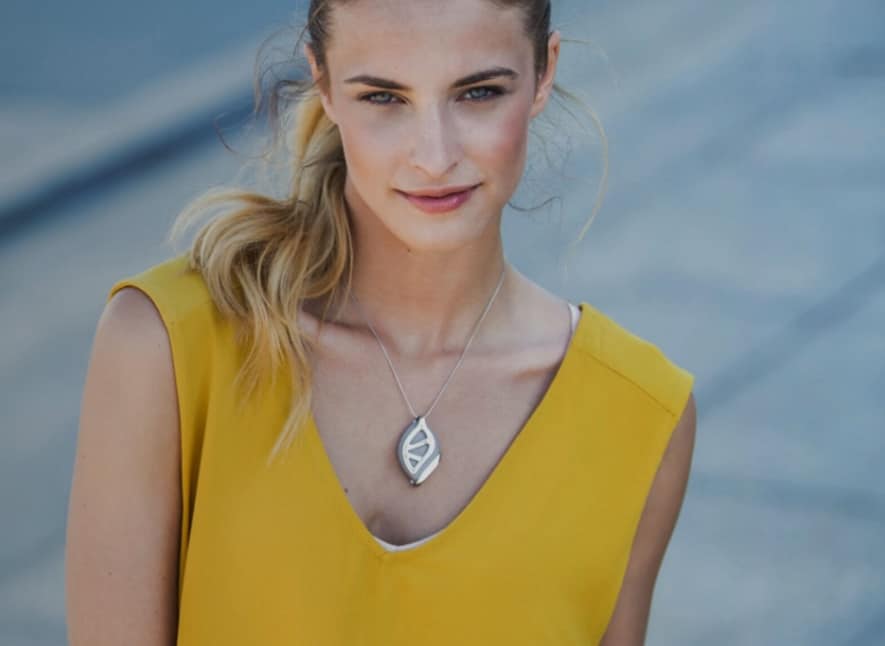 The BellaBeat Leaf has proved to be quite popular so far. In fact, the initial run sold out, and the company currently has a nearly full waiting list of women who are eager to buy one. Plus, smart jewelry is a rising sector of the wearables market; pieces do everything from track activity to discreetly alert wearers of new text messages to keep women safe from harm.

We have to think that in the coming year, we’ll see more trackers and other devices hidden under the surface of more attractive pieces. The Leaf and other pieces of smart jewelry may look like mere baubles, but they’re powerful, highly functional electronics wrapped in a beautiful package. It’s definitely an idea whose time has come.

Smart Jewelry is a rising sector of the wearables market; pieces do everything from track activity to discreetly alert wearers of new text messages to keep women safe from harm.