As cryptocurrencies become more and more popular, it is inevitable that public interest in blockchain technologies experience a similar rise in popularity as well.

While many focus on the trading aspect of cryptocurrencies, the technology underlying it is a massive game-changer in terms of what it can contribute to society.

For instance, blockchain technologies are currently being tested in many countries around the world to help improve processes and as things stand, these technologies are mere steps away from being implemented and utilized officially.

The potential of the blockchain to revolutionize industries and processes in the world today is unparalleled and unfortunately, not too well-known to the public as many tend to focus on making a profit from cryptocurrencies instead of the actual use of it.

With that being said, some companies are making the effort to push blockchain technologies to the world as a means to solve real-world problems—not just as an alternative investment opportunity—that businesses and communities are facing today.

One of the most proactive and promising companies in this aspect is Universa, a next-gen blockchain technology designed to complement real businesses and provide elegant solutions to problems in the modern world.

Like Bitcoin or Ethereum, Universa is a blockchain technology but to categorize it together with these two cryptocurrencies (or any other coins for that matter) would be a serious understatement of Universa’s advantages.

Unlike other cryptocurrencies, Universa was built for business adoption as Universa focuses more on tokenization and smart contracts as a way to help businesses utilize blockchain technologies in their processes efficiently.

What makes Universa different is that its tokens can be used for literally any use case instead of strictly being a digital currency. For instance, loyalty program systems, in-game currencies, gift cards, and even public transport fares can be supported by Universa which shows the technology’s flexibility in how its implemented.

Another great feature that makes Universa perfect for businesses is the use of trusted nodes for the blockchain. Most cryptocurrencies are not suitable for business use as they rely on untrusted miners which is a risk as businesses are essentially relying on random actors to help verify transactions on the blockchain.

Universa approaches it differently; all nodes in the blockchain must be licensed and authorized by the organization before going through several processes to ensure that these nodes provide the best service possible to the Universa blockchain.

All of these features culminate into a blockchain ready for even the most demanding of businesses hence making Universa a good option for businesses who want to benefit from the blockchain but still maintain high levels of efficiency and security.

The rest of Universa’s features can be read in an article that we covered previously or in the official whitepaper which lists and explains every single feature in detail.

Bitcoin and Ethereum are still two of the most popular cryptocurrencies right now in terms of market cap and usage but this situation exposes an evident weakness in the blockchain.

This is not ideal for users at all as they pay more fees for slower transactions—a combination that is economically inefficient and not good enough for real-world businesses.

Universa overcomes this problem in its blockchain design but the team has taken this one step further by introducing the UltraBTC(UltraETH) token, an impressive feature that allows BTC and ETH transactions to happen instantly at significantly lower costs.

This method works as it acts as an escrow agent which then allows the exchange of any digital asset to another although only UltraBTC and UltraETH are available as of the time of writing. The team will develop the system further to allow any tokens to be exchanged in the future hence strengthening Universa’s position in the cryptocurrency industry.

Universa in the media and recent highlights

Universa has recently made waves with some great partnerships and appearances in notable events. At the recent ChildTech forum, Universa founder, Alexander Borodich, signed an agreement with the Russian Public Chamber and RACIB to introduce blockchain technologies in schools, charities, adoption and medical examination procedures. 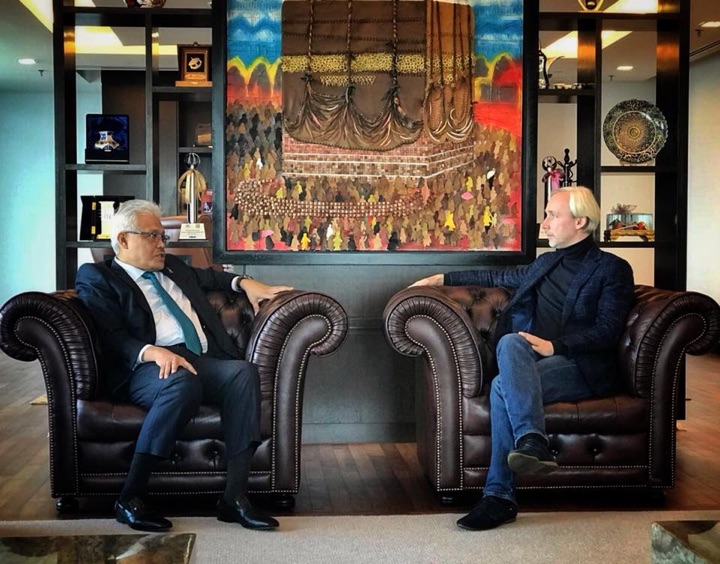 Russia’s openness in implementing the blockchain in public service sectors as well as the country’s cooperation with Universa cements the technology as one of the leaders in promoting the adoption of the blockchain in real world situations.

Borodich also attended the 2018 Global Challenges Summit—an event which featured notable names like Steve Wozniak and Ban Ki-Moon—where the Universa CEO presented his thoughts and opinions on the future of money and cryptocurrencies.

Capping off the team’s recent highlights was Universa’s appearance at the St. Peterburg International Economic Forum, an anticipated event attended by the most important decision makers and individuals from various companies and industries all over the world.

Borodich was part of an interesting presentation and debate on blockchain technologies which led to a meeting agreement between Universa and the Russian Central Bank.

Last but not least, Livecoin, a popular digital currency exchange platform, has listed Universa Tokens (UTNP) on its platform which bodes well for the token’s value and liquidity. Of course, the team will be working on adding UTNP to more exchanges in the future so that investors can trade UTNP more conveniently.